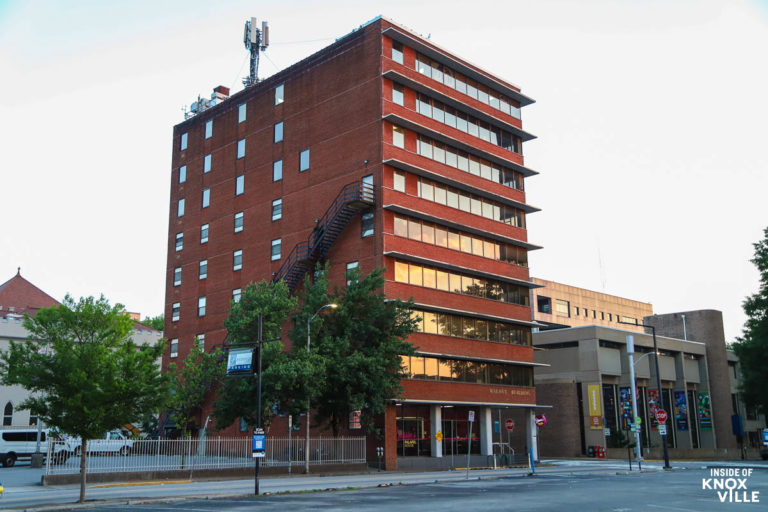 The nine-story Walnut Building at 706 Walnut Street has become the most recent downtown building to be planned for conversion to a hotel. The building, owned by Nadeem Saddiqi, will be transformed by Hitesh Patel and Atlanta-based Elevate Architecture Studio. The same group is linked to the Springhill Suites coming to the Old City, although in that case, in conjunction with Nick Patel, who is local.

The plans submitted to the Knox County Design Review Board (which you can see in full here) indicate plans to convert the commercial and office building into commercial and hotel space. The lobby would face Walnut Street via an altered (and straightened) façade, while the existing business, Yassin’s Falafel House, would remain in its current space.

To that end, Yassin released a statement via Facebook:

We are a aware of the planning of building a new hotel in the building . . . they promised we going to keep our lease in the building and we are happy with idea as long we can stay safe and operate safely during the construction. We are still waiting to have more details since the plan has been submitted officially. We still have a lot of years left in our lease and as always we going to be YOUR place where you enjoy a meal and fell the love. Our Falafel house is not only a business . . . (it) is a home for all of our community and is going to stay in same way.

Changes to the 1955 building would start with the exterior, which will include staining the brick an “opaque white color.” The curved, recessed store front facing Walnut would be replaced with a horizontal front facing the street. An accessible entrance and a second-floor stair egress would be added to the east side of the building. Signage would also be added to the exterior of the building.

Upon completion, the hotel is slated to include 91 rooms on the top eight floors of the building. This comes on the heels of two new-construction hotels and three building conversion hotels announced for Gay Street, as well as the hotel planned for the Old City. Of the six announced hotel projects, only one has begun construction.

No timeline for the project was given.