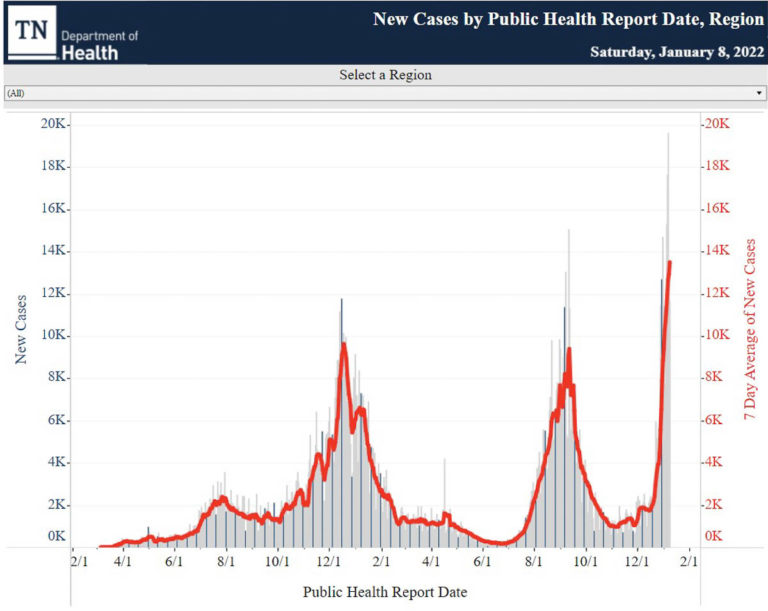 At this point, the only update that makes sense is one each week and that on Thursday. Both the state of Tennessee and the Knox County Health Department have determined that COVID-19 updates will only come once each week. Further, that data release will come on Wednesdays and will only include data through the previous Saturday. Going forward, our best local data at any given point will range from four days old to ten days old.

I expressed my concern to the Knox County Health Department that they announced the new reporting cycle on the day that Knox County reported more than 1,000 cases of COVID-19 for the first time. While other illnesses may be reported in this manner, none of them are currently considered a pandemic.

I received the following reply:

. . . moving to weekly reporting will allow our team members to more thoroughly review data before publishing (as is standard practice for other infectious diseases) while also still showing our community the trend of disease spread in our community. As we have said over the course of the pandemic, trends are what are important . . .

we will be living with COVID for a long time to come, this was an important step in our operations to standardize COVID-reporting in a sustainable way for our team members moving forward. As always, daily data updates aren’t our only way to communicate . . . and if something were to occur in the future outside the reporting schedule that warranted immediate release, we we can share that information with our community.

There is no question that trends are important, and I’ve focused at least as much on those as I have daily data from the beginning of the pandemic. I read one article that likened daily data to tornado warnings. It may not be perfect information, but you need it now, not next week. Weekly reporting, the writer likened to the ten-day forecast. Important in its own way, but not the same.

But it is all we have currently.

There are a couple of other variables at play this time around, which impact data and are important to understand. First, home tests are not being universally reported and many, many people are taking them. Best practice would be to self-report, but in the absence of that, we can only assume that any case numbers reported at this point are farther short of true numbers than has been the case earlier in the pandemic.

Hospital numbers, however, can give a false impression in the other direction. The conspiracy theory circulated early in the pandemic that doctors and hospitals were falsely giving the COVID-19 diagnosis to people who were in the hospital for other reasons to inflate case numbers. That remains untrue.

However, the symptoms of the current variant are so slight, particularly among vaccinated and boosted people, that hospitals are now making the diagnosis more often among patients who are there for another reason. The impact is still felt on hospital personnel because these patients have to be treated in a much more staff-intensive manner. That said, the distinction of people hospitalized with COVID-19 as opposed to because of COVID-19 is now a legitimate point to make. Current hospitalization numbers include a significant number of each.

I reported a week ago that the current rate of spread globally dwarfs anything seen before. In the six days since I wrote that, global cases increased by 43%, with 19,044,451 new cases reported in the last seven days, for an average of over 2.7 million new cases per day. Deaths are increasing, also, but not as steeply, with just over 6,600 deaths per day, or a 10% increase over the previous week. For reference, current case numbers are about 450% higher than anything we’ve seen before, current deaths are about 45% of the previous peak.

The United States is, once again, leading the world in new cases, with an average of over 781,000 new cases per day. The previous peak surge was about a year ago and topped out at 230,000 new cases per day. In the last fourteen days, reported cases in the U.S. have increased by 159%. January 6 is now reported as our current record, with 890,602, but with states like our own not reported daily, numbers will have to be retroactively increased.

The state is reporting an average of 13,503 cases per day over the last week, up from 9,409 cases per day the previous week, for an increase of 43.5% from one week to the next. Each of the last surges peaked short of 10,000 cases per day. The 19,646 new cases reported for 1/6/2022 was the highest single day total since the beginning of the pandemic. The record has also been broken each of the two previous days.

Just over 87,000 vaccinations were given in the state in the last week. Tennessee’s 51.6% vaccination rate continues to rank 43rd out of the 50 states.

The Knox County data includes only a small portion of a week beyond what was previously reported. Should the KCHD stick with weekly updates on Wednesdays, the units reported will become more consistent.

Data reported through 1/8 indicates 72,139 confirmed cases of COVID-19 in Knox County. The final three days of the current report represent three of the five highest daily case totals of the pandemic, including the new record of 1,003. To date, there are 72,139 total cases and 1,078 deaths.

Over the last seven days included, the KCHD has reported 3,975 total cases, for a daily average of 568 per day. The period ended with five consecutive days of five hundred or more new cases. That number had only been reached twelve times prior to this point over the last two years. Active cases in the county now number 6,766, the highest number of active cases at any time during the pandemic.

Hospitals in the 19-hospital region are reporting (as of 1/8) 361 COVID-positive patients. The number slowly rose from a low of 127 in mid-November through the end of December and has risen more quickly since. 87 COVID-positive area residents are in ICUs and 50 are on ventilators. One small bit of good news in the hospital numbers: So far, hospitalization numbers are rising more quickly than ICU and ventilator numbers. While there is an expected lag between the numbers, this looks to possibly be a difference this time around, with fewer people requiring more extreme treatment.

UT Hospital reports 107 COVID-positive patients with 78% unvaccinated and an average ICU age of 55. The hospital continues to report each weekday and the current number reflects a 27% increase since last Friday. Covenant Hospitals have seen a need to move in the opposite direction of both the state and the county, and have resumed daily reporting, like UT Hospital. Covenant is reporting 197 confirmed COVID-19 patients at their various area hospitals, with a median age of 65. 64% of their COVID patients are unvaccinated, but 78% of those requiring ICU support are unvaccinated.

Forty-seven COVID-19 deaths were added to the totals today, but the KCHD said 42 were added because of the state audit and belong to earlier months in 2021. Five of the deaths were from the current period reported, including one from December and four from January. Current totals by age demographic include 48 people between the ages of 18-44, 230 people 45-64, 257 people age 65-74, and 543 people aged 75 or older.

Test demand is high, with over 11,000 tests reported over the seven-day period. The positive test percentage is 37.6% and rising. 57.95% of Knox County residents are fully vaccinated.

UTK is reporting daily, and their current number indicates 54 COVID-19 cases on campus. After a two-day week last week (following Winter Break), Knox County has been in session three consecutive days and reported 160 total cases on Monday, 210 on Tuesday, and 290 on Wednesday. Reported numbers still remain far below last fall’s peak of 923 but are the highest they have been since the end of September.