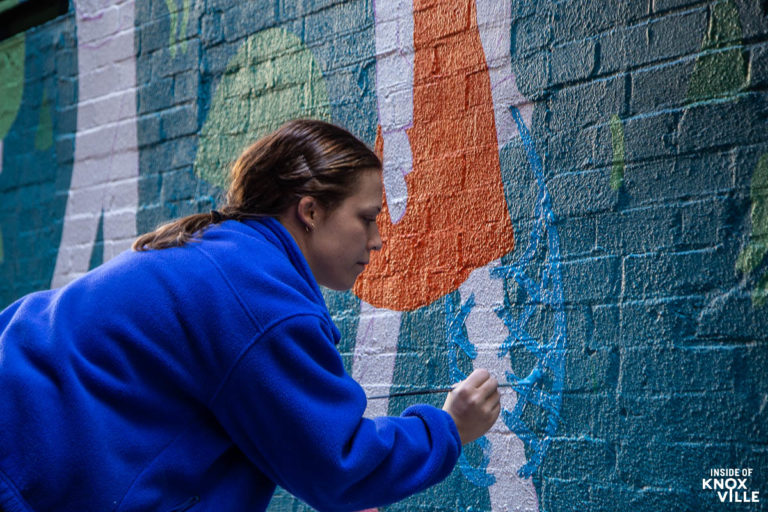 A new mural is underway in Strong Alley and should be completed this week. Dogwood Arts commissioned the mural by one of may favorite artists and favorite humans, Paris Woodhull. Mural work marks a shift for Paris who has been known for much smaller works, such as the one you see pictured below of Bob Dylan. She’s also well known for her whimsical maps of downtown Knoxville. You can see (and shop) the wide range of her prints and more at her website.

She’s currently at work on a very large mural (it stretches 32 feet), which marks not only a recent shift for her, but also a change in KUB’s stance on murals on the back of their Miller’s Building. The utility had long declined use of its surfaces for murals, but has recently relented, allowing for a significant expansion of the works that can be included in the alley. Paris will place the third mural on that surface (the others are by Sarah Moore and Sonia Summers).

The mural features a number of Knoxville landmarks, like the Tennessee River, Tennessee Theatre, Sunsphere, and more. The focus is on a mix of people enjoying everything the city has to offer. It feels like a continuation of Paris’ love letter to her city started with the maps which take a light-hearted look at the various portions of the city.

The mural is a part of the Art in Public Places Mural Program, and Paris said she is very pleased to work with Dogwood Arts. Paris will continue that this spring when her work will be unveiled as the official 2022 Dogwood Arts Limited Edition Print. A different local artist is featured each year and past artists have included Richard Jolley, Heather Whiteside, Andrew Saftel and many others over several decades.

A born and raised Knoxvillian, Paris Woodhull’s heart will always be in her hometown. Along with a line of products that include apparel/paper goods she also offers a range of freelance illustration services. Paris received her BFA in 2D art with a concentration in Painting & Drawing from the University of Tennessee, Knoxville. She loves bold color, pattern, pop culture, portraiture, fashion, and is fueled by copious amounts of coffee. Paris recently completed the “It’s Great to Be a Tennessee Vol” mural, commissioned by UT’s Office of Undergraduate Admissions and Visit Knoxville, on the State Street Municipal Parking Garage. The community will see more of her work this winter, as Woodhull designed and painted the ‘Letters to Santa’ mailbox that will soon be on display in Market Square. See more of her work at https://pariswoodhull.com/.

You may have seen Paris over the years working first at Reruns on Market Square and then down the street on Union Avenue. More recently she has worked — and her work has been displayed — at Rala.

You can catch Paris at work this week in Strong Alley and after sometime around Friday, you can see her completed mural there. In the meantime, you can follow her on Facebook, Instagram, or check out all her work for sale (including a wide range of products) on her website.