Helen Ross McNabb: How to Respond to Mental Illness 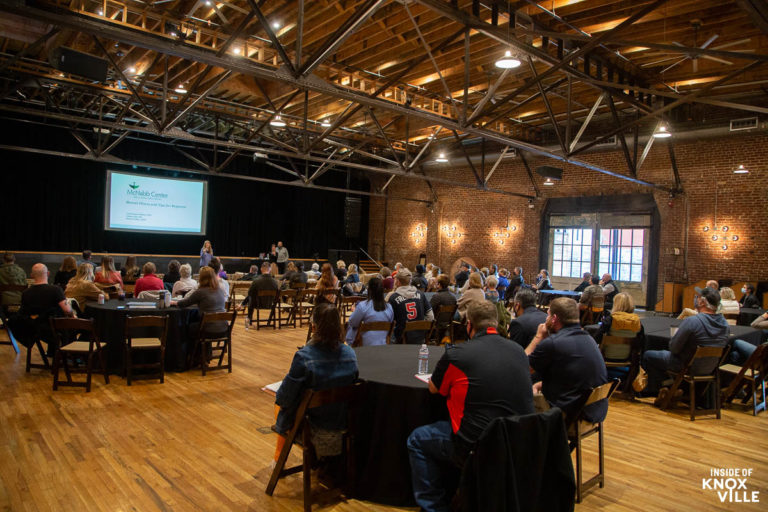 Any conversation about homelessness and/or mental illness is complex by nature and often fraught with frustration for those attempting to navigate its by-products. That the Venn Diagram of mental illness and homelessness overlap isn’t a surprise to most people. To those living in areas with high concentrations of homelessness, the images of people hallucinating aren’t unusual.

So how do we respond? The answer to that question depends on our immediate goal. Are we concerned for their safety and intent on getting them help? Are we feeding a restaurant full of customers when their episode starts in the middle of our dining room? Are we simply trying to get down the sidewalk to the next thing we need to do? Are they blocking the doorway to our home or business? Do they seem benignly unaware or are they distressed? Are they angry and threatening? 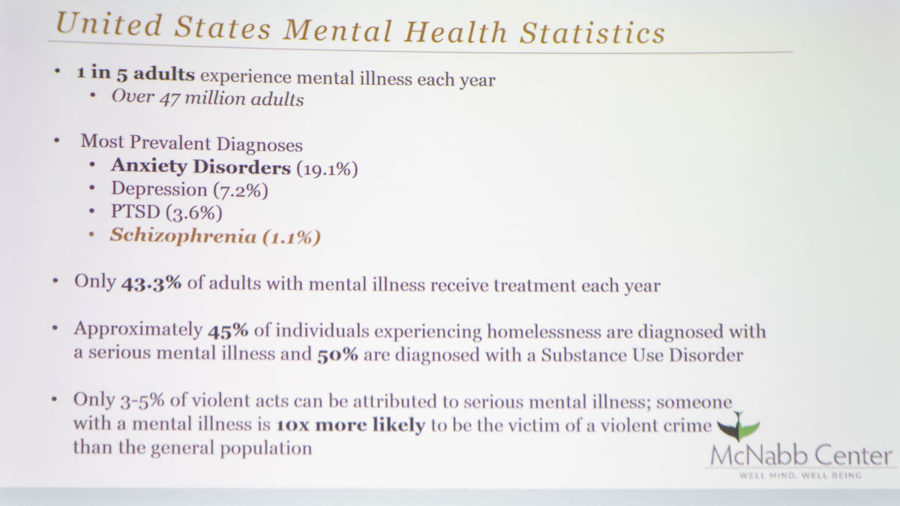 Downtown hospitality workers often deal with difficult situations. They are attempting to do business and are sometimes interrupted by apparently mentally ill people and the proper response isn’t always obvious. Call the police? Try to talk the person down? Give them food? There is a tension between compassion and the need to do commerce. Between helping and enabling.  Between personal impulses and the reality of being in a public situation.

At the request of downtown hospitality workers, the City of Knoxville contracted with Helen Ross McNabb to begin a conversation to answer some of these questions. Armed with a presentation, they held a meeting yesterday at Mill and Mine. While they had information to share, they also stressed they wanted to learn what downtown residents, business owners, and others most want to know as they navigate difficult situations.

Leann Human-Hilliard, Candace Allen, and Michael Waltke led the session and walked the gathered group of about 75 downtown residents, business owners, and workers through the presentation and then took questions. Michael presented statistics and facts about mental illness to set the conversation. Of interest, about 20% of Americans could be considered to have mental illness, with depression and anxiety being the dominant forms of mental distress. 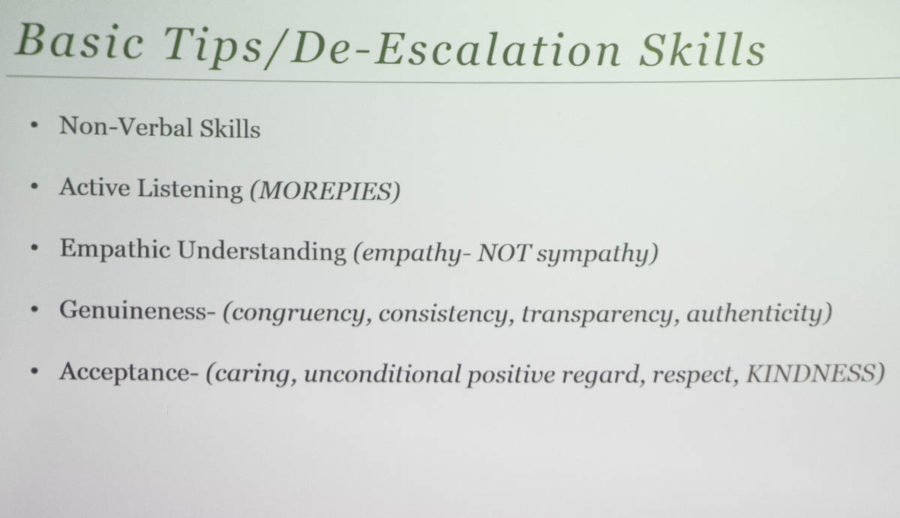 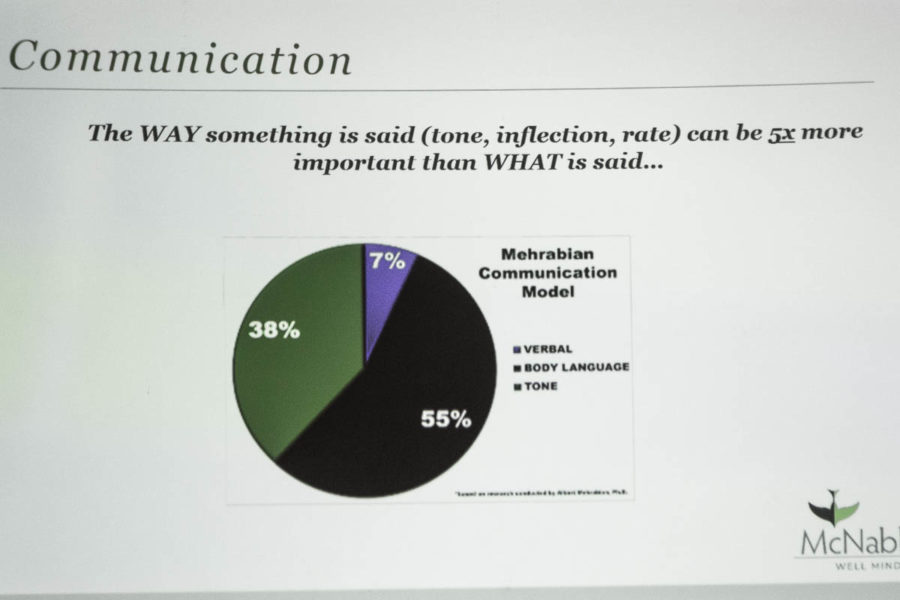 While those in an active psychotic episode may seem scary to those around them, the fact is that very few are dangerous and, as a group, they are much more likely to be harmed than to harm anyone else. In fact, the seriously mentally ill are ten times more likely to be the victim of a violent crime than the general population.

Candace Allen discussed communication strategies for deescalating a person who is experiencing extreme distress. She pointed out that more than the content of our response to such a person, our body language and tone will tend to calm them or escalate the situation. Remaining calm and speaking soothingly, among other things, can go a long way.

Practicing active listening skills can also be important. Some of the ways to practice that include asking open-ended questions, rather than yes/no questions. Reflecting what the person said and perhaps pairing that with an emotion they might be experiencing can make them feel heard and understood. Raising your voice, initiating physical contact, or responding emotionally to the provocations are likely to escalate a situation. 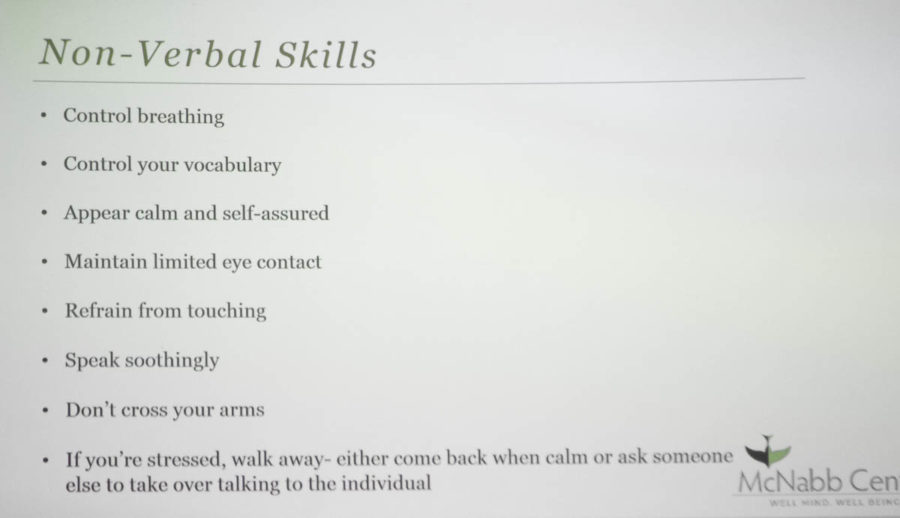 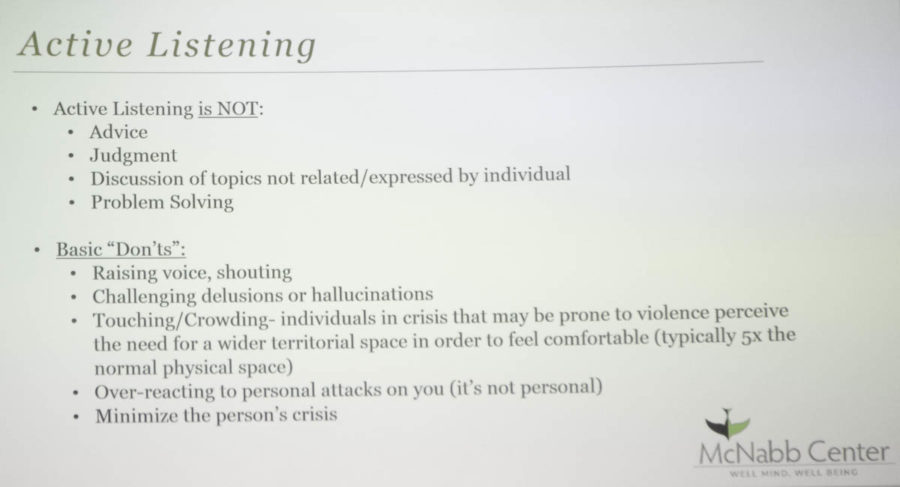 She suggested the “80/20 rule,” or listening 80% of the time and talking the other 20%. A list of possible sources of help for someone experiencing an extreme mental health issue or episode were offered and are included here.

The point was made in the question/answer session that many people are not comfortable engaging a person in mental distress. Sometimes we just need to get into our home, open the doors of our business, or wait on our customers. There are, of course, no easy answers to an acute situation. A mental health team is not likely to appear the moment we need them.

That said, there is now funding for four crisis intervention teams, which include a MS level counselor and a policeman. A call to 911 can be accompanied by a request to send one of those teams. Statistically, about half the people who are attended to by these teams can be deescalated on the spot, while about half wind up in an ER. Only about 3% go to jail.

While Helen Ross McNabb offers a range of services helpfully listed on their website, it became clear there is no central listing of all the kinds of services available from the range of agencies. Some in the audience felt this is something that would be helpful.

The group emphasized that this is a first attempt to determine the needs of the downtown community. Some suggested that more intensive training for those who are interested might be helpful. They suggested a survey would be coming which would solicit ideas for further sessions.

It’s a complex problem that doesn’t have easy answers. It’s a problem that has different answers depending on the situation. While we haven’t found all the answers, having the continuing conversation as a community is the only path toward improving a difficult situation, allowing normal activities to flow, and hopefully getting help for our distressed fellow citizens.