Tennessee and Knox County COVID-19 Numbers by the Month 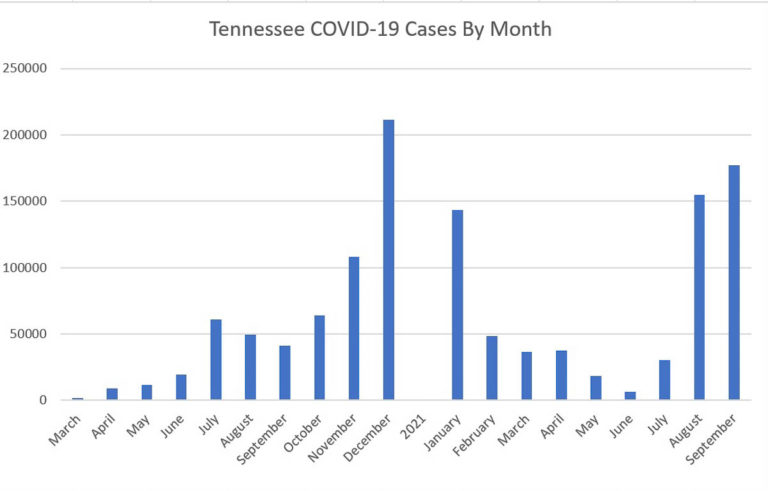 A year ago, or so, I was asked to present the COVID-19 data by the month. The idea being that the inundation of daily numbers can sometimes obscure the bigger picture — too many trees, with little conception of the forest. So, I started the monthly charts which I maintained until February. By then numbers had dropped to relatively low levels and the need seemed less.

With the recent surge and now an apparent reduction in cases, it seemed a good time to take the wider view. In doing so, I realized some of the numbers I had used earlier for the state were altered. In most cases the changes were not large and they went in both directions, with some months now reported slightly higher and others slightly lower.

County data is even more dicey. The county didn’t report daily for a long time and so reports didn’t fall neatly at the end of each month or the beginning of the next. Some numbers were also likely changed when data was reviewed for county of residence. I did the best I could and it is close enough that no conclusions regarding the trends would be appreciably changed.’

Finally, to be clear, I speak of the rates coming down, and these charts do not reflect that fact. Numbers at all levels are dropping rapidly over the last two weeks, but the numbers from the first half of the month were so high that the monthly totals reflect that. If we had not peaked when we did, September would likely have been our worst month of the pandemic.

As you can see in the above chart for state cases, we had a little jolt in July of 2020, then eased up before exploding from September to December. In a three-month span, we suddenly had a case rate about five times higher, from around 4,000 cases in September, to over 20,000 in December. It was a breath-taking increase.

What came next still confounds me. The drop in COVID-19 cases from December to March was even more dramatic than the leap in the fall. We dropped from about 211,000 cases per month to 36,000 in that span, paralleling case numbers globally and nationally. It wasn’t warmer weather. It was too early for much of an impact from vaccines. We didn’t suddenly start taking the virus more seriously and masking up. Maybe the original version of the virus simply spent itself.

It was easy by June to think the whole thing was behind us. With fewer than 6,500 cases in the state for the entire month, and people continuing to get vaccinated, we (literally) began to breathe a little easier as we largely abandoned masking and began to make plans for travel and other pleasures of our COVID-free lives.

Unfortunately, that rosy view ignored the twin realities of vaccination hesitancy and resistance and the Delta variant. With so few vaccinated and reticent to return to masking, once the Delta variant arrived, we were a petri dish in waiting. In the same amount of time it took us to race to our peak last fall, our cases increased much more dramatically, zooming from about 6,500 cases in June to nearly 27 times as many in September, at over 177,000.

Now, again paralleling the country and the world, we are seeing a decline in cases, once again. This decline could be partially due to vaccinations though, as before, it seems more as if the variant has spent itself more than anything else. Our vaccination rates are not good. Our resolve to mask up, including masking our children at school, is very low. So, it seems a combination of vaccinations and luck are causing the recent decline in new cases. October looks to be much better unless there is a reversal.

A couple of points to note: First, this peak was lower than the last. If we can continue vaccinations, perhaps that will be true with the next surge, and more so with the next, until we do reach a point of some stable number of cases over time and the virus becomes endemic. On the other hand, hospitalizations were higher than the previous surge and beyond our medical capacity. Those hospitalized were also younger and largely unvaccinated.

As with the cases, the number of deaths in this surge seem to have peaked at a lower level in the state. This is likely due to vaccinations, as about 97% of those who died this summer and fall were unvaccinated. I am assuming September will represent the peak in deaths, as deaths seem to be slowing following the recent declines in cases. That may not be the case, as deaths lag cases and if you look at the charts above, cases peaked in December, but deaths peaked in January.

As with the rise in cases, the three-month rise in deaths was more dramatic than the previous surge, simply because deaths from COVID-19 fell to such a low level in the state, with 119 reported in June. Again, with a January peak of close to 2800, 119 felt like the end of the pandemic. Unfortunately, three months later the state recorded 1,664, or about 14 times higher.

Still, broadly, the patterns are the same. After peaking at almost 12,000 cases in December, Knox County cases fell by nearly 50% in January, and then by over 50% in February. As was the case across the state and country, June almost felt as if the virus has disappeared. Unfortunately, the 139 cases reported in June would be over 70 times higher by September when the county reported 9,838 cases.

The rapid rise and high number of cases resulted in numerous related problems, such as a shortage of tests or test appointments, longer reporting times, inability to properly conduct tracing, and overloaded hospitals. Those getting sick were younger and they were sicker. The percentage in the ICU requiring ventilators was higher than the first wave and the patients needing that level of care were almost all unvaccinated. That made this surge different: The first wave killed the vulnerable while the second wave mostly killed those who had made a choice not to be vaccinated.

The rapid rise in deaths was very pronounced in the county. After reporting ten or fewer deaths for three consecutive months, deaths rose from 10 in July to over six times as many in August. In just two months, from July to September, deaths rose from 10 to 121. With three months left to tally, there have now been more deaths from COVID-19 both at the state and local level in 2021 than was the case in 2020. July 2020 is the lone month locally that recorded more deaths than its counterpart in 2021.

The big picture implies that we are still not in control of this virus. Clearly, the cases and deaths can escalate rapidly. Our behavior so far, as a culture, indicates we will not respond to increased threats. A fatalism seems to have set in among many people that accepts the virus and its impacts as inevitable. If we are not willing to respond differently when risk increases, we are destined to repeat the same cycles until the virus is simply finished with us.

The counter to that is that many people have gotten vaccinated. Additionally, vaccination mandates are pulling in those who have resisted the vaccination, and younger children are about to become eligible. A recently announced oral treatment is reported to cut deaths in half among those who become ill. So, there is cause for hope.

For now, we are likely to hit a period we can relax a bit like we did in June. For all appearances, numbers of cases and hospitalizations are dropping, and deaths should do the same. Will it last? Who knows? We do know that if it reverses, it can do so quickly. The more of us who get vaccinated, the less likely the next surge is to be so severe.