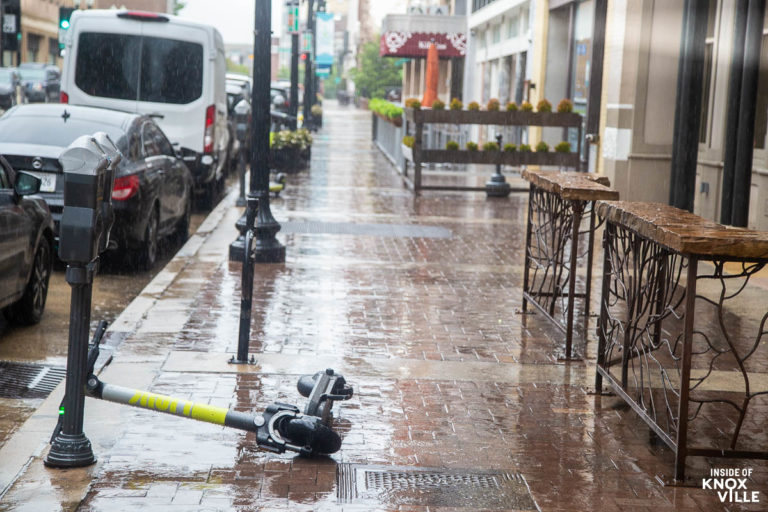 Scooters on Gay Street (To and From the Meeting About Scooters), Knoxville, August 2021

In an era of COVID-19, shootings in the city, increased homelessness and Black Lives Matter, downtown residents can still find a little room for Scooter Outrage. Controversial from their initial rollout, the delightfully fun, environmentally helpful, dangerous and obstructive little jewels have prompted many an impromptu sidewalk debate in the last couple of years.

The city called a meeting last night to discuss what they’ve learned so far from the pilot program and to solicit input from downtown residents. On the way to and from the meeting, I photographed part of the problem: abandoned scooters on the sidewalk, which are not only a tripping hazard, but also prevent the passage of wheelchairs and strollers.

The city has spent the last two years watching what has happened with the scooters, studying what other cities have done, and compiling a survey to see what city residents think of the program. By the end of the year, the city council will vote to accept contracts with new guidelines or to reject scooters in the city.

The program went into effect in early 2019 with two vendors operating 250 scooters each. Changes, made in early 2020, addressed a couple of problems. A curfew (currently 11:00 pm to 7:00 am) went into effect (no more late night drunk scooter driving for you!) and the expectations for restaging, or placing the scooters in appropriate spots, were increased. A community survey was completed in early 2021.

There were few surprises in the meeting, but one was that the city is aware of only five “major incidents,” none of which, apparently, resulted in death. Five significant accidents over a 2 1/2 year period with “hundreds of thousands” of rides is a surprisingly low rate given the risks that seem to be taken on the vehicles on a daily basis. They also feel that sidewalk riding has been reduced over time, probably due to signage on the vehicles, as well as on the sidewalks.

As a result of what they’ve seen, learned, and heard from residents, those tasked with recommendations are suggesting a number of changes to the program if it becomes permanent. There have been two vendors and they recommend continuing with that number, though the contracts would be put out as RFPs and would not necessarily result in the same two companies being retained. They are suggesting that each company be able to have 300 vehicles on the street.

The three hundred vehicles would include any kind of electric vehicle, such as the standing scooters we now have, seated scooters or ebikes. Seated scooters are bigger and each would count as three units against the 300 total. Additionally, the company given the contract will be required to offer at least fifty regular bicycles, which would not count against the 300 limit.

A permitting fee will be included, which will cover, among other things, the construction of corrals for the scooters. Those corrals will be scattered across downtown and Fort Sanders, the two areas of heaviest usage. The in-street corrals will be carved from current parking spaces, taking fifteen out of the two areas combined. Each corral can hold about ten scooters. Riders would not be required to return scooters to a corral, but would be expected to park them properly if not.

Vendors would also be expected to re-set each night, ensuring that each day begins with scooters properly parked. Additionally, the city will step up enforcement, fining the company for incidents of inappropriate use or storage of the scooters. The company would have the option of passing that fee to the offending rider.

Ed Patrick, a downtown resident who is significantly visually impaired, pointed out that the haphazard discarding of the scooters makes his life very difficult. He also pointed out that the early morning re-set would do nothing to help during the day and he asked about whether the scooters make an environmental impact. He was told by the assembled panel that the re-set would be ongoing through the day.

Regarding the environmental impact, a panelist from U.T. made the point that, while measuring their negative impact is tricky (you have to include, for example, the vans that ride around picking them up), they can have a positive impact if they replace short car trips. Some people present acknowledged using them just that way.

A second surprise, to me at least, came when the statement was made that only about 20% to 30% of the rides are “joy rides.” The rest are from point A to point B and most of those are between Fort Sanders and downtown. The claim was stated that scooter traffic between Fort Sanders and UT for the duration of the pilot, has been about the same as the number who rode the T Route bus during that time.

The conversation will be ongoing, and some of the recommended changes may be installed this fall. This was called a “first public meeting,” so, assumedly there will be more. The city welcomes feedback, should you be so inclined, via email at scooters@knoxvilletn.gov.