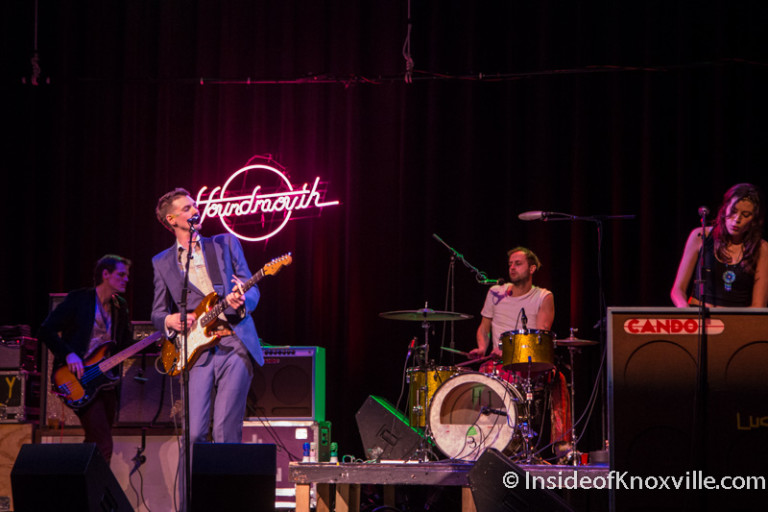 After a promising start as Knoxville’s first music festival to be held in Suttree Landing Park, 2020 saw a disruption of Second Bell’s regular August blow out. In an effort to continue the flow of music, Blank Newspaper hosted one of the first local streaming events with proceeds going to local bands and hospitality workers. In the fall they followed that with two successful drive-in festivals. But Second Bell took a hiatus due to the pandemic.

This year the festival is back (August 27 and 28) and, for the first time, has expanded to a two-day event at Suttree Landing Park. Two music stages will grace the site, along with expanded bars on each side to reduce crowding. Comedy events have been expanded and include many of Knoxville’s best, along with some of the best regional comics. Those events will be seated, distanced and under an open-air tent.

I sat down with Rusty Odom, founder of Blank Newspaper and Second Bell, to learn what is different about this year’s festival and more about the artists who will be appearing. His excitement was clear from the opening moments of our conversation.

With yesterday’s announcement of Palm Palm, the lineup for the festival is complete. “That’s J. Roddy Walston’s new band. We’ve been trying to get him for years, going all the way back to Blankfest. We wanted him and his band The Business to headline as far back as 2014.” The new band formed in late 2019 and has hardly performed live. J. Roddy Walston is originally from Cleveland, Tennessee, but the band is based in Richmond, Virginia. Their initial release comes out two weeks before the festival and Rusty predicts, “People are going to have a new favorite band after they see them.”

He says he could make the same prediction about other bands in the line up. While a schedule of performers has not been released, Rusty gave me an exclusive first look at the lineups for each day:

Kelsey Walker (Indie Rock) opens the festival at 5:00 pm on Friday (gates open at 4:00 pm), followed by Gabe Lee from Nashville. “I think he’s going to be absolutely huge. He sounds (and writes) a lot like John Prine.” Gabe has been promoted by Jason Isbell among others. Tennessee Power and Light (funk and soul), featuring a number of original members of Gran Torino is up next followed by the first live performance by Smokin’ Dave and the Premo Dopes since 2014.

Rusty said that, in addition to attempting to present up-and-coming artists just before they explode on the scene, he’s also tried to book reunion shows, like Smokin’ Dave and the Premo Dopes. The drive-in shows featured a reunited King Super, for example, and Lil’ Iffy took to the stage after a long break in 2019. “I’m really grateful to these bands who’ve chosen to reunite for our festival.” Palm Palm closes Friday night.

Also on Friday, the Comedy tent cranks up. Rowan Young, who just won Knoxville’s Finest Comic, is bringing her Tiny Stage Comedy group to present the line up. “I love that there are females making some noise in the local comedy scene.” There will silent disco presented by Midnight Voyage after the comedy sets.

Saturday the gates open at 2:00 pm. Odom said it is starting a little later this year (previously they opened at 11:00 am) to avoid some of the heat. Handsome and the Humbles kick of with their first show in over a year, followed by Thrift Store Cowboys. Chew, a “psych rock all instrumental band” from Atlanta will follow. Rusty said the woman playing drums with the band is one of his favorite ever, calling her “mesmerizing.”

Good Guy Collective will follow Chew, bringing their version of hip hop fun to the stage. “Hip hop is one of my first loves, musically. It’s always important for me to have on the bill.” Susto is a favorite of Jess Hale who deals with everything artist related at the festival. Rusty isn’t certain they have ever played Knoxville, but “they do really well in markets all around here, so I’m happy to bring them,” he said, calling the music “Indie Folk.”

Neil Francis is the penultimate act for the evening, who Rusty said “is one of the first artists I reached out to.” He said he saw him at Barley’s a couple of years ago and says, “There is no way this guy won’t spring.” He’s squeezing the festival in between shows with the Grammy nominated Black Pumas. “He’s got an old school vibe . . . and a great band with a funky sound.”

“It’s always fun to say you saw them before they got big and that’s something we’ve always tried to do.” He mentioned bringing Moon Taxi to Blank Fest, Second Bell’s precursor. In that connection, he thanked Scott and Bernadette West for helping make the early festivals possible and for “getting me into this big mess that is producing festivals. I definitely wouldn’t be here today without them.”

Houndmouth is the headliner and they’ve got new music out which Rusty says is “great. Having a band with draw and the name recognition of somebody like Houndmouth is really cool. They are going to put on one heck of a show.”

Now is a great time to see comedy, particularly in an outdoor setting. I’m especially looking forward to catching Jeff Blank and Liz Brooks at the comedy tent on Saturday. They are two of my favorite people and they are hilarious. I’m going to make it a point to catch their sets if I can get away for a second. Especially since we spelled Jeff’s name wrong on the poster and his last name happens to be the name of my paper. Hopefully, he roasts me a bit for that.

“We want to make sure that everyone is as comfortable as possible. The number one priority is to ensure everyone’s safety. We want to make sure everyone has a great time. We will have complimentary masks at the gate for anyone who wants one,” even though the outdoor setting is safer. “I’ve ordered 288 bottles of sanitizer that will be all over.” He added that VIP areas will be larger.

There are other fun things like a “human car wash,” sponsored by Beatty Chevrolet and and First Century Bank, which will involved going through a mister and coming out the end to a huge fan. KUB is providing a water station. Sugar Lands is selling drinks in souvenir cups and those can be used for getting free water from the water station. “Two years ago it was so hot that we made the water free and that was a big hit. We want to do what we can to keep people safe.”

He said credit needs to go to to those behind the scenes like Jennifer Duncan Rankin and Matt Rankin, Steve and Rebecca Hines, Daniel Fluitt and Jess Hale. He confesses he has been a control freak in the past and they have helped him be able to let go of many of the details to them. He said they only have one rule entering the festival with all its twists, turns, and intensity and that is to “always take the high road.” He said it has served them well.

He’s also appreciative to his sponsors. “Scarecrow Foundation has been such a wonderful partner over the years and this year we’re taking an additional step in our mission to tackle hunger in the region and far beyond. Through a partnership with Beaty Chevrolet, Scarecrow is giving away a brand new car via the XHunger initiative.

People can sign up for XHunger clubs and find places where they can donate their time and efforts to help feed people who are in need. And while they’re doing so, they’re entered to win the car, so it’s truly a win-win for everyone. The car will be on site at the festival and people will be able to find out how to identify a charitable program that makes the most sense for them.”

“It’s been a wonderful experience and a lot of work. It’s like climbing a mountain. When you get there and see people smiling, hearing a band for the first time and looking at their friends saying, ‘Can you believe how good this is?’ makes it all worth it.”