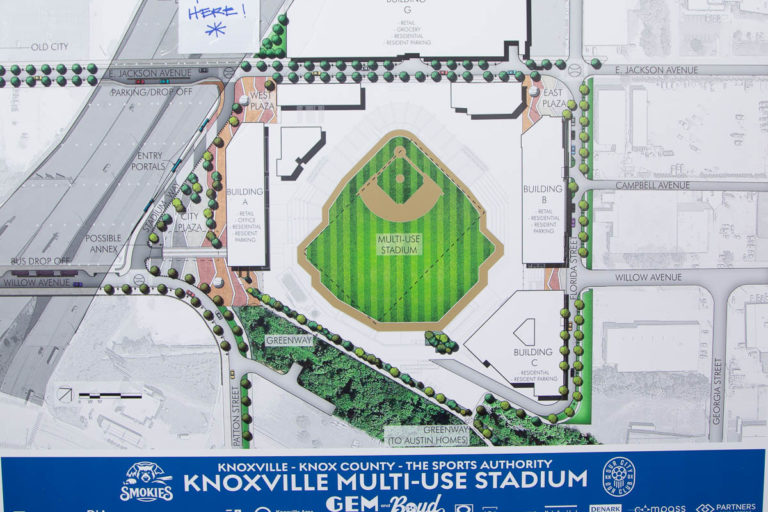 It was an informational event, certainly, but the distinction between that and a promotional event was hard to determine at times. It was partly a fun festival, with free rides in Olli, the self-driving vehicle developed by Local Motors, games for the kids, and food trucks for everyone. Various architectural, construction and other interested parties were on site, as well as some indirectly involved groups, such as the Urban League and KCDC.

But if there is a controversy regarding the proposed baseball stadium (referred to as a “multi-use stadium”), it was not apparent at the event. The people I spoke to were supporters, were involved in the project or, at the least, felt the coming project was inevitable. It felt more like a happy kick-off.

There are still hurdles to be crossed: City Council still has a vote, as does County Commission, but there has been little indication from either body that the inevitability of the project is in question. While it may not pass either body unanimously, that it has met so little resistance has been somewhat surprising.

For anyone who has been sleeping, there was some information provided, though it has mostly been covered before. For example, a flyer handed out at the event broke the project down by these numbers:

The project is being promoted as a benefit to east Knoxville. To wit: $1.1 Million is designated for renovation of Claude Walker Park, a park 3 miles to the east of the stadium. $560,000 is committed to grants to area youth athletic associations. Over $3 million is dedicated to “center city programs.” Also, a “target” has been set for a minimum of 15% of construction projects to go to “Disadvantaged Business Enterprises.” The group has also struck agreements with the Knoxville Area Urban League and Beck Cultural Center.

Another area which was emphasized, was “improvements to infrastructure and connectivity through streetscapes and greenways.” In this arena, I was impressed with the greenway construction to the nearby, and soon to open, Austen Homes, as well as the connection to Parkridge. It really will be an easy bike ride or walk from a range of places outside of downtown.

The timeline pictured here shows approvals primarily the task of 2021, with construction running from 2022 into 2023, and completion and occupancy set for late 2023 into 2024. The first pitch is set for spring of 2024.

The early vision for surrounding buildings was laid out with buildings A, B, C, and G labeled and delineated on the drawing included here. Building A, located between to the west of the stadium would include office, residential, retail spaces and parking. Building B, located to the east of the stadium, would offer the same, though without office space. Building C would be residential only.

Building G, located to the north of the stadium includes residential, retail, and parking, but also lists “grocery store,” something that has elicited something of a buzz. To my knowledge, no grocery store has signed up for the space, but rather the designation is aspirational.

The site has, essentially, three construction projects. The first is the infrastructure that has to be upgraded by the city. The second is the baseball stadium, and the third is the surrounding development. Each of the last two are anticipated to proceed simultaneously.

Connectivity was a major focus, which may have been the point of having Olli, the driverless vehicle present. There will, no doubt, be trolley, bus and other shuttle service directed to the stadium. There will be greenways and other enhanced walking and biking routes. The relationship to surrounding areas was emphasized. The stadium will be a 12-minute walk from Market Square and all the surrounding parking that implies. Interestingly, a diagram showed a short walking path to the parking at the Coliseum, as well.

If the upbeat atmosphere of the day translates into positive votes in coming weeks, we will be launched, for better or worse, on a journey that will land us in a new stadium sometime in 2024.