Brother Wolf and Osteria Stella Open in the Old City 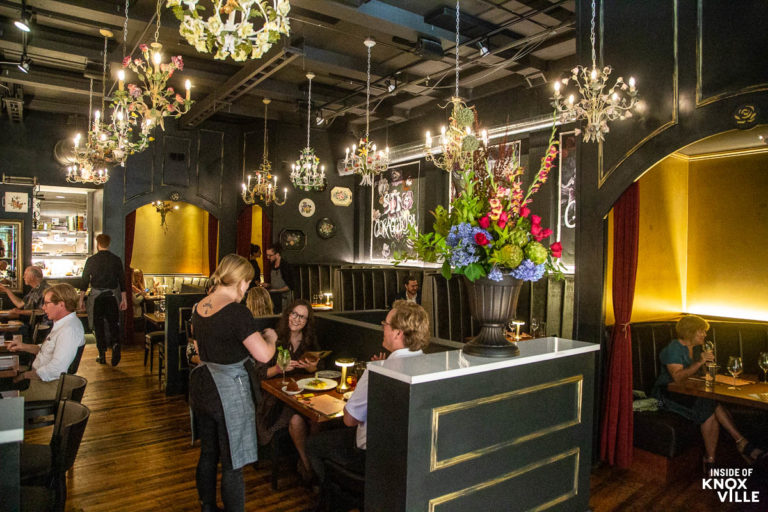 The long-awaited Italian restaurant, Osteria Stella, and its companion aperitivo bar, Brother Wolf open to the public tomorrow at 108 West Jackson Avenue. The two locations held soft openings the last two weekends to glowing reviews. The two businesses are the latest project by Sapphire (which they anticipate re-opening) owners Aaron Thompson and Jessica King with menu development by Amalia Brusati di Settala and the kitchen headed by chef de cuisine Sal Sanchez. I sat down with the Aaron, Jessica, and Amalia to get the story of how the concept came to life.

When we started working on this project, our intention was to open a classic Italian aperitivo bar. Our goal, the more Aaron and I travel to other cities and countries, we find things we love. It’s a combination of being selfish and wanting to experience those things over and over again close to home, and wanting to share great things that we see and taste . . .

When you spend time in Italy, their lifestyle is something to aspire to, just slowing down, enjoying life a little more, not taking life so seriously. Shifting value from working, watching tv, and being on social media, to socializing and spending quality moments with people who you care about, learning new people, and having meaningful conversations. It’s sitting on a patio sipping a beverage for hours. If we could bring a slight echo of that to our home, we would have done a great service.

Aaron added that he feels there has scarcely ever been a moment in history that socialization between friends and family has been as important as it is now. “It’s seems the perfect time to open a bar whose goal is to bring people together.” Jessica agreed and said it’s a great opportunity to bring people who have been isolated for so long together, “without tv’s in their face, genuinely enjoying the company of others.”

They looked at various spaces downtown, but when they learned the Old City Wine Bar and Rebel Kitchen were closing, they decided the spot was ideal for what they wanted to do and it was clear it needed to be both a bar and a restaurant. They began exploring how to open a restaurant that would complement the bar and continued with the Italian theme.

The bar, Brother Wolf, echoes the story of Remus and Romulus, twin brothers who, according to legend, were raised by wolves and later founded the city of Rome. Rome is a city that Aaron and Jessica have grown to love. The restaurant, Osteria Stella, is named after the simple restaurants in Italy (you’ll see no white tablecloths here) and Stella, Aaron and Jessica’s lovely one-year-old daughter.

Aaron pointed out the lack of an Italian restaurant in the Old City and said he feels every neighborhood can sustain its own Italian restaurant. “It’s one of the basic foods people crave. The aperitivo bar was going to be our love letter to Rome and Milan and that dictated that we try to bring authenticity to what we were doing . . . We sought out an Italian chef.”

It happened in a chance conversation with a friend, Maja, from Slovenia. Aaron, against their agreement to not talk about the concept according to Jessica, told her they were looking for an Italian chef. It’s probably good that he did, because she introduced them to Amalia, who had moved to Knoxville during the pandemic. The rest fell into place as they tasted her dishes and talked with her about what they wanted to accomplish.

Amalia was providing free online classes through her new company Ami.Mi.Kitchen during the pandemic. She’d moved to Knoxville from Milan with her husband Jace. In Milan she was originally a fashion buyer, but eventually gravitated to the culinary traditions in which she was raised, attending the Food Genius Academy  in Milan. She became a chef for an air B&B in Italy where she taught tourists to cook her favorite Italian dishes. She plans to offer cooking classes and private dining experiences in Knoxville.

She worked together with Sal, translating her recipes into commercial dishes for use at the restaurant. “He’s an amazing chef, but he’s not Italian, so I helped teach him how things should taste in an authentic way. Her recipes will be offered on each side with a lighter menu at Brother Wolf and the full menu at Osteria Stella.

I asked for her favorite dish, and she smiled and said, “I’m from Milan, so I love risotto because it is our iconic dish. It also has a memory because my grandfather used to cook risotto. It was the only dish he was making, and it was amazing. I’ve never had risotto like his. I was the first granddaughter, so I had the honor to scrape the pan, that crispy bottom layer.” She said her risotto is “very close.”

Jessica described the atmosphere at Brother Wolf as “bright, bold, lively.” An espresso machine is being set up and “you’ll hear the sounds of fresh coffee being made. The initial cocktail menu is really trying to be true to aperitivo and the history of this style of cocktail.” She says the cocktail menu, designed by Shawn Moriarty of Washington, D.C., “has a kind of walk-through history of aperitivo.”

She said the menu should look familiar to people who have visited similar bars in Italy. She noted that several of the drinks are low alcohol, with the intention of allowing conversation through the evening, without a goal of inebriation. “That’s really the goal of Brother Wolf: To create an atmosphere where people relax, enjoy the company of others and have good, meaningful conversations.”

Aaron said that on the Osteria Stella side, you will notice a real contrast. While Brother Wolf will continue to be bright and well lighted throughout the evening, the restaurant will have much darker tones and subdued lighting. “All the pops of color are done and lighted in a very intentional way. The music is different on each side, with modern, up-tempo music in the bar and slower music in the restaurant.” DIA helped develop the architectural plans.

One special touch you will notice on the Osteria Stella side specifically references Stella, the namesake of the restaurant. Three paintings completed by artist Emily Key say, “Be brave, be strong, and be kind” in Italian. Jessica said, “That is our wish for Stella.” On the Brother Wolf side, you’ll find an impressive mural painted by Jessica Ramsey.

The menu and courses are also designed with the same intentionality and mirror what you’d find in Italy, with antipasta, primi, secondi, contorni, and dolci. “The wine list has 140 wines, all Italian, representing all twenty wine regions, developed specifically to pair with the menu that Amalia and Sal collaboratively developed.” Jessica added, “There’s not another wine list of its size and caliber of 100% Italian wines probably in the southeast.”

Aaron said there are 32 wine-by-the-glass options including premium pours, “very rare, allocated bottles, but also very approachable, affordable wine by the glass, all thoughtfully chosen to be sustainable wineries.” He said many are from smaller wineries, rather than large industrial operations.

Pointing out that there are no white table cloths, he said the intention is to be “somewhere between casual and fine dining. I’m the sommelier and I’ll be in a suit and tie, but the waiters will not have ties, but will be nicely dressed.” Amalia explained, “Osteria is a very simple restaurant serving comfort food, where there was the “oste,” the person in charge of the wine. The main concept is the simplicity of the food and the ambience.”

The restaurant has offered soft openings for the last two weekends and Aaron said the response has been amazing. He said the staff has executed the opening wonderfully and Sal’s food has been wonderful. He mentioned the excellent sous chef, Greg Sutton. He said the two together have made a great team. Sal has experience at the Nico Osteria in the Thompson Hotel in Chicago. He was also the sous chef at Emelia, where he met Greg. Each of them also worked at Blackberry Farm.

The restaurant is purchasing as much as possible from local farms. “It’s how we eat,” Aaron said, “why would we want to serve the public something we wouldn’t eat. I don’t want to own a restaurant if I don’t feel proud of the food we serve.” Amalia said, while some vegetables common in Italy are difficult to get locally, she is pleased with the quality of produce and meat they have found. “We’re extruding our own pasta, the gnocchi is made by hand, the stocks are made from scratch, as are the desserts and bread. Anything we can make, we are making it. I couldn’t be more proud of what is coming out of our kitchen.”

He said the front of house has also been excellent, with Brad Poyner leading the service staff in the restaurant. “We empowered Brad on this side, along with Amber Heeke, who is the maître d’.” The two interviewed for all the service positions. Madison Walker, who worked with the couple at Sapphire for five years ending as manager there, is the director of operations for Brother Wolf. Others from Sapphire have joined, while others have moved to other jobs or left the industry.

Urban Woman and I enjoyed a cocktail with friends in Brother Wolf and a wonderful meal on Friday evening at Osteria Stella. She enjoyed a bellini, while I had a delicious negroni before the meal. We started with Arancino (rice, meat ragu, peas, mozzarella, pickled onion $8) and Polpo e Patate (Octopus, potatoes, celery, $20 GF). The octopus was done perfectly, and the accompanying potatoes were amazing. Favorite of the two dishes for us, however, went to the Arancino, which was like a symphony of texture and taste.

As we moved toward our main dishes, we had a side of Patate al Forno (Potatoes shallots, rosemary, $8 V*) and we shared Rigatoni Cacio e Pepe (Pecorino Romano, black pepper $18 V*) and Gnocchi de Patate (butter, sage, parmigiano reggiano 18 V*). We loved it all, but the star of the group for us was the gnocchi.

For me, the dinner was accompanied by two glasses of Piero Pan Garganega ‘Soave ($12 per glass). The wine was perfect. For dessert we shared the Crostata (shortbread, custard, seasonal fresh fruit $8 V*) and Tiramisu (lady fingers, mascarpone, marsala, espresso, cocoa $8). The Crostata was light and delicious, if you want just a little sweet taste to end the meal. The Tiramisu was more decadent, but worth it for us on this special night, as it was simply wonderful.

Starting Tuesday, hours for Osteria Stella will be 5:00 pm to 10:00 pm, Tuesday through Thursday and Sunday, and 5:00 pm to 11:00 pm on Friday and Saturday, closed on Monday. Brother Wolf will be open seven days a week until 3:00 am each day. It opens at 4:00 pm each day, except for Saturday and Sunday at noon. The hours may change.