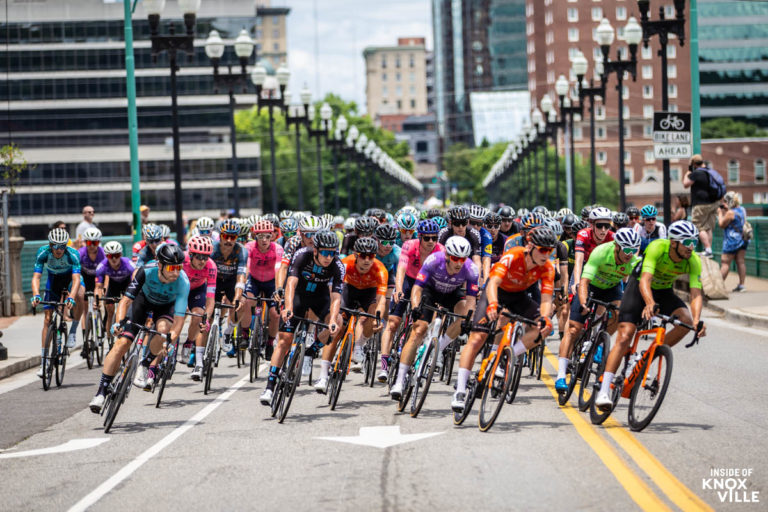 Two years ago I determined that my next U.S. Pro Road Championship would be a different experience. I walked the entire course at least two previous years and, after becoming dehydrated on the South Knoxville Bridge, I determined I had shot the entire course enough. It was fun shooting the riders wherever they caught me, but I’d done that and I determined to be kinder to myself in the future. Of course, I didn’t know it would be two years until the next race.

This time around, I watched a portion of the women’s race on television. Being out on the course the entire time didn’t allow following very closely the progress of the race and I missed that, so I watched. A fun bonus was watching the race on television and then glancing off my balcony to see the riders coming through. I also waved at the drone from my window when they showed my home. Did you see me?

About mid-way through the roughly 71 mile women’s race I stepped out onto the street and took a few shots and was able to get the winner, Lauren Stephens (Dallas; Team TIBCO-SVB), as she crossed the finish line. The crowds were growing and the excitement was high. I began seeing friends I hadn’t see since prior to the pandemic and that was yet another bonus. Every encounter felt like a reunion.

For the men’s race, I decided to skip the start and climb to the top of the hill across the river for the shots looking down on the Gay Street Bridge and the city. From there I walked down the hill and shot the next lap from the end of the bridge and then walked through the the city to the old city, taking shots along the way of the turn onto Gay Street and the pass through the Old City.

At that point, I decided to stop into the condo for much needed water and to watch some of the men’s race on television and from the balcony. After hydrating, taking a short nap and getting into the broadcast, I decided to keep watching and conclude my involvement for the year. The race coverage on television was very good and the race was fascinating.

In the end, Joey Rosskopf (Decatur, Ga.; Rally Cycling) made a major move toward the end of the race to take a fairly easy victory, but the race was dramatic throughout. The 146 rider field was reported to be the largest in at least fifteen years.

An early breakaway was overtaken by the pelaton before the first lap ended, but on the second lap, Sam Boardman (Washington, D.C.; L39ION of Los Angeles) and Kyle Murphy (Townsend, Vt.; Rally Cycling) attacked and maintained their lead for most of the race, eventually being joined by George Simpson (Fort Collins, Colo.; Project Echelon) with ten laps to go. Their lead expanded to over five minutes, but then slowly began to drop as the main group pursued.

While he would eventually finish third, the ride of the day may have belonged to Murphy, who was working to help his teammate Joey Rosskopf.  “Luckily, I was with Sam Boardman, who is the world’s strongest bike racer, and then George [Simpson] came up, and honestly, it was just smooth riding with them. I think we probably saved energy and didn’t have to ride hard on the hill every lap. I just decided to try to hang out there as long as possible to give our guys a free ride,” said Murphy about being on the front for almost half of the fifteen-lap event.

A chase group of six riders, including eventual winner, Rosskopf, emerged and caught the group with three laps to go. After repeated failed attacks from multiple riders, Rosskopf attacked just before the final lap and maintained a steady lead for the last 12.6 kilometers. The successful attack was made possible by the team work of his two fellow Rally team riders, including Murphy, in the lead group. From the press release, “This is Rosskopf’s third professional national title and first in the road race. He previously won the time trial in 2017 and 2018.”