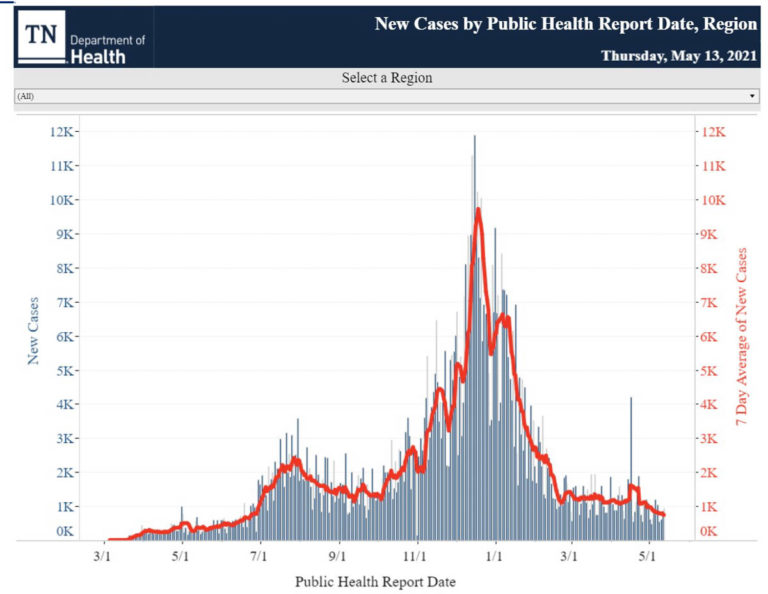 Most trends continue to be encouraging this week, though progress fighting the pandemic is uneven across the globe. If nothing else, the contrast, certainly in the U.S., between now and where we were heading last year at this time demonstrates how far we have come. The pandemic is not over, but there is much reason to celebrate nationally and locally.

161.8 million cases of COVID-19 have been confirmed across the world. Of these, just over 139.6 million people have recovered, while almost 3.4 million have died. Just over 5.1 million new cases were confirmed this week, a drop of 8% from the previous week. An average of 734,096 new cases were reported each day this past week, down nearly 61,000 per day from the previous week.

13,427 additional deaths were reported yesterday, down about 600 from the same day last week. The three countries reporting the most deaths for the day remain the same, with only India’s deaths reported at a higher level than last week. The largest number of deaths reported yesterday by country include India (3,999), Brazil (2,340), the U.S. (762), Colombia (499), and Argentina (447).

It is worth noting that India has reversed its curve, with new cases falling impressively over the last week, though they remain extremely high. A week ago, India was almost daily changing the record for most cases in a day for any country during the pandemic. Average daily deaths in the country continue to rise, but not quite as rapidly as had been the case.

As noted previously, while India’s numbers have been incredibly high, international observers generally agree that their numbers are vastly under-reported. To balance that, however, due to India’s enormous population, while the raw numbers reported are large, the country’s official tallies put them far down the list of countries in per capita cases (#110) and per capita deaths (#109).

Of interest in the past week, The Seychelles has experienced a 57% surge in new cases from the previous week. This is interesting because the country has the highest percentage of vaccinated citizens (62%) of any country in the world. Most vaccinations given there are the Chineseo-produced Sinopharm vaccine, which experts feel has closer to a 50% effectiveness rate than the 95% claimed by the Chinese government. Of those in the country who have gotten most severely ill and have died, however, almost all were unvaccinated.

About 1.37 billion doses of the various vaccines have been administered internationally, up about 130 million over last week. This reflects a slowing from the previous week in which saw over 160 million given. The New York Times reports the following shot rates per 100 people for each of the continents: North America (52, but for the U.S. it is 80), Europe (36), South America (21), Asia (15), Oceana (8.1), and Africa (1.6). Seychelles, as noted above leads the world in percentage of its population fully vaccinated (62%), while the U.S. rose from ninth to fifth at 35%. China continues to lead the world in total vaccines given at 354.3 million, while the U.S. is second with 264.7 million.

The U.S. continues to have the highest total number of COVID-19 cases reported in the world for a single country at over 33.6 million, including 256.5 thousand cases in the last seven days, a drop of 21% from the previous week. Almost 26.7 million Americans have recovered from the virus, while almost 599,000 have died. Almost 6.4 million currently test positive for the virus.

The U.S. is averaging 36,648 new cases per day, a decline of about 9,600 per day from the previous week. The daily average is the lowest it has been since September 13 (36,251). Today marks one full month of daily declines in the rate of new infections in the country. While the U.S. continues to lead the world in total cases, India continues to close that gap and now reports 24 million cases. Over the last week, India has added almost 2.6 million new cases, while the U.S. added about 10% as many.

The average daily death rate also continues to decline, though not every day, and more slowly than the decline seen in cases. The average number of daily deaths over the last week in the U.S. was 625, a drop from 677 per day a week ago. This is the lowest rate since July 8 (596).  4,376 deaths were reported over the last week, down from 4,834 the previous week (-9%). As a frame of reference, the latest death rate is more than six times higher the number of people who die each day from automobile accidents in the U.S. (102 per day).

The U.S. continues to lead the world in total number of deaths from the virus at 599,000, but the U.S. is no longer reporting the most deaths each day. Over the last seven days, India has reported almost seven times as many deaths as the U.S. and Brazil has reported over three times as many. Among populous countries (over 1 million), the U.S. dropped from fourth in per capita cases to fifth as it was surpassed by Sweden. It now trails Czechia, Slovenia, Bahrain, and Sweden in that category. Among the same countries, the U.S. remained fifteenth in per capita deaths. The U.S. has given more tests than any other country in the world but continues to rank 11th in per capita testing.

Over the last fourteen days, only four states, Louisiana (11%), Mississippi (4%), Wyoming (3%) and Nevada (1%) are reporting increases in rates of infection. Each of these states are also well below average for vaccination rates, with Louisiana tied for 44th and Mississippi at the very bottom. New Jersey has shown the biggest drop over the last fourteen days with a 78% drop in cases. It has the seventh highest vaccination rate.

Vaccination rates have leveled off over the last week, relative to the week before. About 154.6 million people (more than 58% of those eligible) in the U.S. have received at least one shot, including about 5.1 million first shots in the last week. About 119 million people (36%) are fully vaccinated, up from 108.9 million a week ago.

Vermont now holds the top spot for first vaccinations given (63%), with Massachusetts, Hawaii, New Hampshire, and Maine, rounding out the top five. Maine continues to lead in those fully vaccinated (47%), with the top five rounded out by Connecticut, Vermont, Massachusetts, and Rhode Island. Tennessee remains tied with Idaho at 45th in first shots (35%), with Wyoming, Louisiana, Alabama, and Mississippi ranking worst. Tennessee is tied with Louisiana, Georgia and Utah for 46th in those fully vaccinated (26%), trailed only by Arkansas, Mississippi and Alabama.

Two major pieces of news broke this week in the U.S. In the first, on Wednesday, approval was given to begin administering the Pfizer vaccine to children ages 12 to 15, and those vaccinations began immediately. It is seen by many as a major step toward making the return to school next fall safer for both teachers and students. The second, was the announcement, just yesterday, that vaccinated individuals do not need to wear a mask indoors.

The second is more complicated because as mandates are removed, that is great news for individuals, but how do stores or restaurants know who has been vaccinated? Knowing that people opposed to masks and vaccines will also now not wear masks, it concerns parents of unvaccinated young children who have their children with them in public places, like grocery stores, for example. The only option going forward is that no masks will be required, which will likely increase spread among those who are not vaccinated.

Over the last two weeks, new cases in Tennessee have declined by 32%, which is remarkably close to the average drop (31%) in the U.S. during that period. 835,714 cases are considered inactive, while 8,409 Tennesseans currently test positive for the virus, the lowest number since early April of this year.

Hospitalization rates have resumed dropping, with 718 COVID-positive Tennesseans currently hospitalized, as compared to 803 a week ago. 258 of these are ICU patients and 121 are on ventilators, numbers that have not dropped significantly. Only six additional hospitalizations were reported yesterday, bringing the pandemic total to 21,548 hospitalized at some point during the pandemic.

The state reported nine deaths from COVID-19 yesterday, bringing the pandemic total to 12,305. Over the last week, the state has reported 60 deaths. The daily average is nine deaths per day, up one from last week. The current rate of deaths remains like that of last June.

The pace of new vaccinations in the state has dropped once more, with the state reporting 181.1 thousand shots given in the last seven days. The number was 229 thousand a week earlier. 4,488,573 total shots have been given in the state and 36.7% of state residents have gotten at least one shot, up 1% from last week. 2,076,077 state residents, or 30.4% are fully vaccinated, up from 28.4% a week earlier. These numbers are higher than those reported above and are likely more recent.

The Knox County Health Department reported 31 additional cases of COVID-19 today, bringing county totals to 43,305 confirmed and 8,662 probable cases. The county averaged 20 new cases per day over the last week, down from 24 a week earlier. 50,959 cases are considered inactive, while 452 Knox County residents currently test positive for the virus, a decline of 102 from the number a week earlier.

No additional deaths from COVID-19 were reported today and a total of one was reported for the last week. Last week the number was two. The total now stands at 636 Knox County residents who have died from the illness. As has often been the case recently, the person who died was between the ages of 45 and 64.

171,523 county residents (35.9%) are fully vaccinated, up from 33.3% a week ago. The county continues to lead the state by about 6% in both first vaccinations full vaccinations. The county is not too distant from the U.S. average for vaccinations (47%/36%).

The COVID-19 metrics for the county were updated, with cases remaining green as they continue to drop. Testing remained yellow, as the volume of testing continues to decline. Health capacity shifted from green to yellow as vaccination rates declined. Hospital capacity remained green, while deaths shifted from yellow to green.

I’ve been including a link to the New York Times page for Knox County for several weeks, as it gives their detailed analysis of where each county in the U.S. stands. Their standards for each category are very strict. They continue to reflect the current risk level in the county as high.

The Knox County School System is reporting 35 active cases among students and staff, reflecting a drop from 44 a week ago. The University of Tennessee has concluded reporting for the semester.