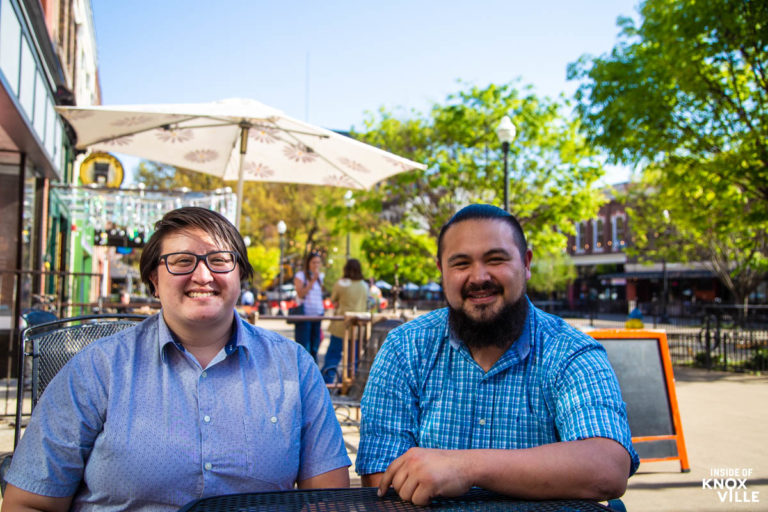 Victoria Scott and Josh Coates are bringing a Korean Fusion restaurant to downtown. Opening a restaurant of his own has always been his dream but doing so with his sister wasn’t in the cards until very recently. Victoria is all in, having quit her corporate job and the two of them are excited about what they can do together.

Born of an American dad who was in the military and a Korean mother, the two laugh and say they sometimes get accused of being the same person as their mannerisms and personalities are very similar. Physically, Victoria takes more after her father and Josh more after his mother.

They grew up in Kingsport, which was where their father was born, and graduated from Sullivan Central. Victoria moved to Knoxville for college and has a B.A. in political science from U.T. She loved the city and stayed, finding a job with a large corporation. Josh stayed in Kingsport for some years and worked in the country club in Bristol, Virginia. After that job ended during the 2008 downturn, he chose to move to Atlanta where he worked in bars and restaurants. He eventually lived in east Atlanta and says that section reminds him of Market Square.

The two started cooking when they were young. Their parents divorced and their mother struggled with her mental health. “We had to cook out of necessity,” Victoria said, “He was always the chef and I was always the foodie.” She worked in restaurants and bars early in her career before the corporate job. She worked front of house at a local country club while she says he has always been more comfortable in the back-of-house.

Josh says, “I was one of the lucky few. I already knew what I wanted to do by the time I was twelve years old. I’ve always wanted to open my own restaurant and make my mark.” He says he was passionate about cooking from early. The two would convene in the kitchen where he would try cooking American dishes their friends’ families ate, but had to use the ingredients on hand, which were mostly Korean, purchased by their mother at the Oriental Market on monthly trips to Knoxville. Those experiments are at the root of the food they will produce for the new restaurant.

He says while there were struggles growing up, he thinks it helped shape them into the people they are today. Their mother died in 2011 and they say she is one of their heroes for raising three children alone while dealing with mental illness. Josh says once their business becomes successful, they hope to start a foundation or other effort to help people who struggle with mental issues. Some of her recipes will be included in the new restaurant, including her kimchi.

Josh said he has worked every job in restaurants, from Chili’s to Marlow’s to more locally owned restaurants. He said he learned a lot about pricing and building recipe structure. He last worked at Ray’s in the City, primarily as a bartender. While there he began working on the concept for his restaurant. He and an old friend, who intended to be his partner in the venture, held several pop-up events in and around Atlanta, testing the recipes.

The two planned to open a food truck and then the pandemic hit, and those plans were put on hold. Meanwhile, Victoria was plotting to get Josh to Knoxville and in February she found a spot that she thought would appeal to him, she convinced him that it was the right move. After the original partner had to bow out due to personal conflicts, Victoria suggested the two of them proceed together. Josh said, “I tend to think more creatively, where she is more methodical and able to do the things I can’t.” Victoria says, “I bring business acumen to the table, but me being a foodie, I make a good sounding board for him.”

“This has happened extremely fast,” Josh said. Victoria said it was the first week of March the two reached the agreement to do it together. With a target of a late summer opening, Josh said it is like trying to cram years of preparation into a few months. They know there could be delays.

The restaurant will be casual Korean American or “a homage to our childhood,” as Josh put it. He said as kids they added kimchi to everything, and they will have their version of a grilled cheese sandwich which they call the “Seoul Kid.” It includes panko-breaded fried cheese with chopped kimchi and a Hawaiian-style glaze, served on sourdough bread. All sauces will be made from scratch.

Victoria says, “Think dishes that you know and love — you will recognize the names of dishes when you see them — but everything will have a Korean spin . . . It will be in a vehicle that you recognize.” She said they will have a fried chicken sandwich, for example, but it will have Korean spices and will be twice fried, which gives it a very crispy finish which is common in Korea. The same will be true for their wings.

She said they will also have some dishes that are tips of the hat to other cultures. Their Seoul Pops, one of Josh’s creations, is a chorizo kimchi fried rice arancini dish. It will be the traditional Italian style with gooey cheese on the inside, but the outside, rather than being risotto will be the kimchi fried rice. Josh said to expect some Vietnamese influence with the Bulgogi banh mi. There will be a more traditional Korean menu for entrees, as well as small plates, and there will be vegetarian and gluten-free items. They are looking at vegan options.

Victoria has left her corporate job and is all-in. They have been working with focus groups to test recipes and have gotten encouragement there. They are working on vendors, food costs, etc., and have gotten help from a mentor assigned to them by the Small Business Association. But most, they are guided by wanting to honor their mother and share a taste of the Korean-style food they remember from their childhood.

The location will be announced soon.