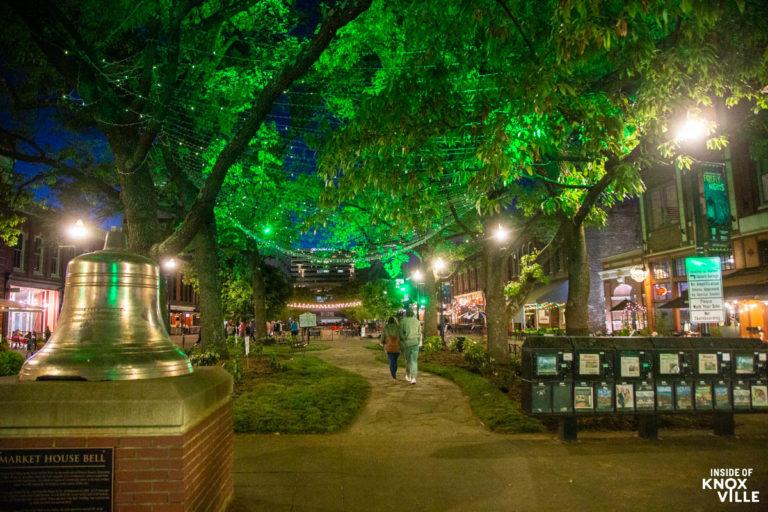 Market Square is the heart of our downtown and of our city. It’s historic, beautiful, charming and fun. After years of different ideas and designs that never seemed to quite work, it has found its stride in the last decade. It’s been a bit deserted for the last year, due to obvious reasons, but it is starting to be more lively as people are increasingly comfortable getting out and enjoying the city.

Thanks to the Downtown Knoxville Alliance, Christmas Décor of Knoxville, Dogwood Arts and the City of Knoxville, there is a new attraction on the square this spring. Firefly Nights transforms the pleasant natural section of the square into a magical space inspired by the Elkmont Fireflies. 12,000 lights will sparkle overhead from dusk to dawn through the end of June.

Michele Hummel, executive director of the Downtown Knoxville Alliance said “People are excited to be getting safely out and about again, and we hope the creation of Firefly Nights can make being downtown even more special for them.”

White lights are strung across the northern section of the square and the colorful rooftops on Preservation Pub and Bernadette’s ad vibrancy to the intoxicating mix of  history and progress, of some of the city’s oldest stories and its strongest hopes for the future. It’s a great time of the year to come enjoy the heartbeat of the city and now there’s a new reason to stroll through the square.

Come down and take a stroll, take selfies or simply photographs of the space and use the hashtag #fireflynights if you post them to social media. It feels pretty magical and, who knows? Maybe it is. Urban Daughter suggested it would be a great place for a proposal, should someone be so inclined. That would be some pretty serious magic.

I’ll leave you with a great video (produced by Gary Steadman) of the space. Enjoy.