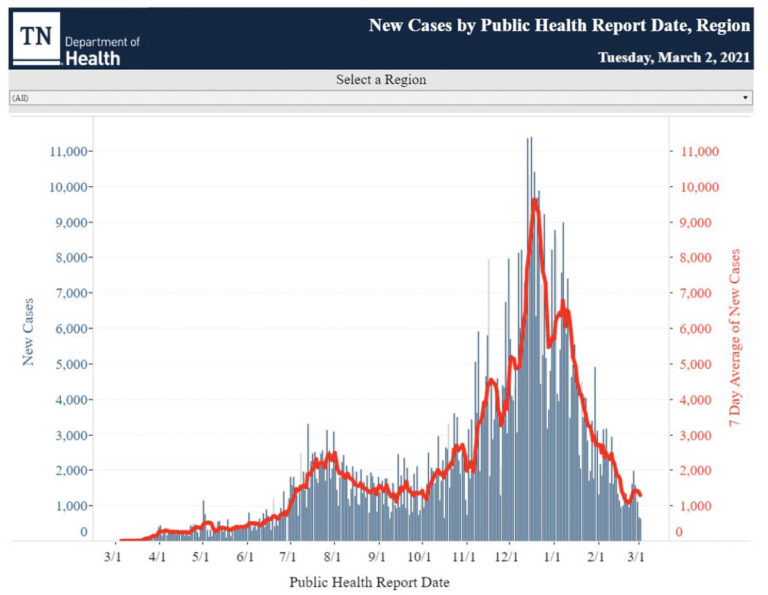 Welcome to a beautiful Wednesday. What a difference a year can make! We’ve made it through the longest and most difficult part of the epidemic. Now we need to see it successfully through to the end. Continue wearing a mask, washing your hands, avoiding crowds and keeping your distance when you can’t avoid crowds. Stay in touch with others, but do so safely. And start getting excited about hugs, dining out, music, travel, and a thousand little things that will seem like such an immense pleasure after so long without.

Confirmed new cases continue to plummet in the state, with 644 reported yesterday. It is the lowest total reported since June 22 (451). A combination of reduced spread and increased vaccinations are resulting in lower testing volume and lower positive test rates. The seven-day average for new cases is 1,288, about the same as a dozen days ago, so the dramatic decline may have paused.

Since the beginning of the pandemic, the state has reported 650,804 confirmed cases and 126,253 probable cases. 751,776 cases are considered inactive, while 13,125 Tennesseans currently have an active case of the virus. Active case totals dropped by nearly 400 from the previous day and are now at their lowest level since June 26 (13,114).

An additional 59 COVID-positive Tennesseans were admitted to the hospital yesterday, bringing the state pandemic total to 18,679. While the broad pattern of fewer hospitalizations continues, the number currently in the hospital has recently stabilized. The Tennessee census for hospitalized COVID-19 patients rose by 22 yesterday to 894. COVID-positive ICU patients (252) and ventilated patients also rose slightly (135).

The state reported an additional 15 COVID deaths yesterday, bringing the state total to 11,436. Deaths have dropped sharply in the state as cases have dropped and, logically, should continue to drop as new cases remain lower. Should we get the spring surge in cases that some are predicting, that likely would not produce the same number of deaths, as many are vaccinated, including the most vulnerable to serious illness and death. The seven-day average is 34 deaths per day, which has stabilized in recent days, having gone as low as 24 on February 19.

The state continues to report extremely low test numbers, with 7,505 added yesterday to the almost 6.7 million given since the beginning of the pandemic. This would be much more of a concern if the positive test rate was also continuing to fall. At 5.93% yesterday, it is near the objective of 5% set by epidemiologists for an adequate testing program. Johns Hopkins University places Tennessee’s seven-day average positive test rate at 8.7%. The magnitude of this number comes in to focus when you consider that in early January, the seven-day average peaked at 29.6%.

The state vaccination rate appears to have reached some stability around the mid 200,000 range. Updated numbers include a total of 1,435,677 shots given across the state. Previous day totals are reported at 11,070, but weekly totals remained at a health 250,524. 498,567 state residents are fully vaccinated, while 12.99% of state residents have gotten at least one shot. Georgia is the only state in the U.S. with a smaller percentage of first vaccinations given.

At the current pace, the state of Tennessee could vaccinate all of its citizens in the next 342 days, or by February 8, 2022.

The Knox County Health Department reported 37 new cases today, bringing Knox County totals to 39,999 confirmed cases and 7,094 probable cases. 45,296 are considered inactive, while 1,257 Knox County residents are currently confirmed as COVID-positive. The number of active cases in the county are the lowest they have been since October 19 (1,225).

Deaths reported today by the county include three people, two of whom are between the ages of 45-64 and one of whom was 75+. The deaths are a reminder that the disease continues to circulate and can also be deadly. Further, the ages of the majority of the deaths reported today is a reminder that it is not only the very old who have died. Eighty-one Knox County residents in this middle-age group have died of COVID-19 in the last year.

The state is reported a seven-day 8.1% positive test rate.

The Knox County School system is reporting 66 active cases of COVID-19 among students and staff, the lowest the number has fallen this semester. 3,332 students and staff have recovered and 775 are in quarantine or isolation, nearing post early January levels. Of the 775, 691 are students and 84 are staff members.

In the only change since yesterday, the custodial services metric improved from red to yellow. Four metrics are now green and two yellow, perhaps the best over-all metrics seen all year. All schools are currently offering in-person instruction.

The University of Tennessee is reporting 51 active cases of COVID-19 among students and staff, down five from the day before. 2,937 students and staff have recovered from the virus and one new case was reported for the day. 223 students and staff are currently in isolation or quarantine, the lowest that number has been since January 24. Of the 223, 38 are staff members, 117 are residential students, and 68 are non-residential.