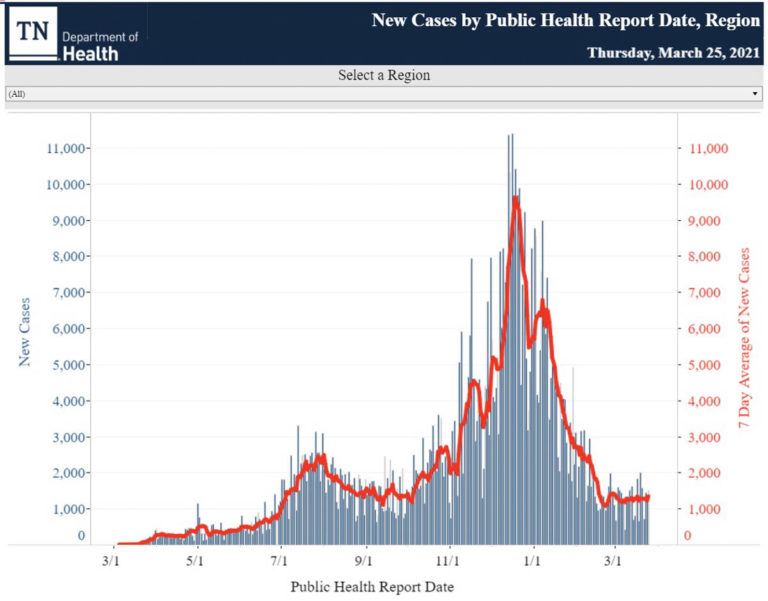 Welcome back to the weekly COVID updates and our first weekly update on a Friday. I’ve enjoyed shifting my focus to the increasing number of activities and openings happening in the city, but we have to remember the pandemic didn’t suddenly stop. There continue to be some encouraging signs, but there are other signals that make clear we are not finished with the virus.

It appears Europe is losing their battle to out vaccinate the spread. The U.S., after initially posting greatly improving numbers, appears to be holding about even in our battle. Please continue to be cautious. A few weeks from now, if we take care, we should be able to resume a much more normal life with much less concern for the virus.

Just over 126.2 million people across the world have had confirmed cases of COVID-19 and over 21.6 million cases remain active. There are roughly 800,000 more active cases today than the number I reported eleven days ago in the most recent update. While about 101.8 million have recovered, an additional 5.7 million cases were reported since my last international update. The current seven-day average of 524.1 thousand new cases per day is more than 100,000 higher than the last report. Current daily averages, which improved until February 20, are now roughly equivalent to the rate in early February.

Over 2,769,000 people have died of the virus, an increase of roughly 103,000 since the previous report. As of the previous report, eleven days ago, daily deaths were dropping. In the time since, that trend has reversed, and international deaths are rising once more. After declining to 8,452 deaths per day on March 12, the average has steadily risen, with the current seven-day average at 9,073 deaths per day. The rate is now similar to that at the beginning of March, but still well off the high of 14,470 set on January 26.

To turn our attention to a single-day snapshot, 10,418 additional deaths were reported for the day, with Brazil leading the world and U.S. following. That pattern has remained steady for several weeks. As compared to my last report, Poland replacing Russia in the top five is the only change. For the day, the countries with the five highest death totals for the day were Brazil (2,639), the U.S. (1,165), Mexico (579), Poland (522), and Italy (460).

Five of the nine countries with highest new case totals are found in Europe, along with nearly half the countries reported at least 1,000 new cases. Outside of Great Britain, most of the continent has struggled to get vaccines distributed and the reliance on the AstraZeneca vaccine proved damaging when most of the continent briefly halted its use due to clotting concerns.

The New York Times reports the following shot rates per 100 people for each of the continents: North America (25, but for the U.S., it is 40), Europe (15), South America (7.5), Asia (4.5), Oceana (1), and Africa (.7). The lower rates in southern hemisphere continents could prove to be a major problem as their winter approaches. As we see vaccine availability increasing rapidly in the U.S., it is important to remember this isn’t the case most places.

France is extending lockdowns, while New Zealand, one of the most successful COVID stories in the world, has imposed additional restrictions on those returning from other countries. From the New York Times, consider this stunning sentence: “Of the vaccine doses given globally, about three-quarters have gone to only 10 countries. At least 30 countries have not yet injected a single person.”

The United States has reported a world-high 30,775,790 cases of COVID-19, an increase of about 700,000 since my last report. About 23.2 million cases are considered inactive, while just over 7 million Americans currently have the virus. The number of active cases is down about 400,000 from the last report. Yesterday, an additional 67,046 cases were reported.

After declining sharply in the weeks following the first of the year, average daily case numbers have plateaued and may be showing signs of increasing. After hitting a post-surge low of 55,517 on March 16, the current seven-day average for new cases is 58,866, about the same as March 9.

559,747 U.S. deaths have been attributed to the illness, including about 12,500 in the eleven days since my last national report. The current seven-day average is 968 deaths per day from the virus. The daily average for deaths is the lowest it has been since November 5 when it was 967. The recent rapid pace of decline in death rates has slowed, with the average remaining in the upper 900s for the last three days. Yesterday, an additional 1,165 deaths from the virus were reported.

Among the same group of more populous countries, the U.S. dropped from eighth in per capita deaths from COVID-19 to eleventh since the last report. The U.S. ranks first in total testing, but continues to rank ninth in per capita testing. Since the last report, the U.S. dropped from fourth to sixth among countries in percent totally vaccinated, while the percentage increased from 11% to 14%.

The U.S. is now averaging about 2.5 million doses per day of the vaccine. New Mexico holds the top spot for first vaccinations given (34%) and is tied with Alaska in leading the country in those fully vaccinated, at 21%. Tennessee (22%) remains in 48th place for first vaccinations, ahead of Alabama and Georgia. For those fully vaccinated, Tennessee (12%) has moved from 49th to a tie for 47th with Arkansas, Texas and Alabama.

Numerous states are removing restrictions imposed to contain the pandemic, while many Americans are traveling once more. Tourism groups are pushing congress to reduce travel restrictions, while over 1 million Americans have flown each day for the last two weeks. The New York Times reports at least 31 states will open vaccines to all adults by mid-April. Rutgers has become the first major university to announce that all students must be vaccinated before arriving on campus next fall. Interestingly, the current demand out pacing supply for vaccines is likely to reverse in coming weeks and the U.S. will have excess vaccines, producing a dilemma for the Biden administration as to whether to begin giving away vaccines or to hold them back in case they are needed for booster shots.

Yesterday, the state of Tennessee reported 1,519 new cases, bringing the total of confirmed and probable cases to 806,011 in the state. The current seven-day average for new cases in the state sits at 1,341 per day. The average has remained remarkably stable for the last two weeks, remaining in the 1200s before rising to its current level yesterday.

An additional 65 people were hospitalized yesterday, leaving the pandemic total at 19,529 hospitalized at some point. While current COVID-19 hospitalizations in the state dropped to 813 according to the most recent data, the number of patients has risen over the last week from 659. Current hospitalization levels are similar to early March. COVID-positive Tennesseans in the ICU have risen to 244 and ventilated patients are just off lows at 101.

The state reported four deaths from COVID-19 yesterday, bringing the state total to 11,796 since the beginning of the pandemic. The average number of daily deaths in the state is 16, twice what it was a week ago. A significant portion of that increase is due to back-to-back days (Tuesday and Wednesday, on which the state reported 34 and 45 deaths, respectively. 45 was the highest daily death toll reported since February 26 (56).

Testing in the state has increased in the last week, ranging as high as the 30,000 range more than once. Positive test results remain well below previous levels. The state reported about 19.6 thousand tests yesterday with a positive test rate of 6.49%. Johns Hopkins University has the state seven-day average at 8.6%, down from 9.4% reported a week ago.

The most encouraging news may be on the vaccination front. While the state still lags other state efforts, the number of vaccinations given is increasing. A week ago, the state was running in the 250,000 range, but the current reports indicate 297,660 shots were given in the last seven days. 2,406,107 total shots have been given and 20.55% of Tennesseans have been given a first shot, while 855,284 (12.5%) are fully vaccinated.

The Knox County Health Department is reporting 94 new confirmed cases of COVID-19 in Knox County today, the highest single day number since March 4 (95). Current case totals include 41,347 confirmed cases and 7,770 probable cases. The average new case number for the last seven days is 64 per day, a increase over the previous seven days (47). 47,495 cases are considered inactive, while 1,017 Knox County residents are currently positive for COVID-19. The number of active cases has increased for three consecutive days and is now at its highest point in 12 days.

39 COVID-positive Knox County residents are currently hospitalized, bringing the pandemic total to 1,314. While much lower than peaks seen at the beginning of the year, the number has been rising and is its highest since March 11 (40).

The state is reporting an 8.6% seven-day average positive test rate for Knox County, down substantially from the 13.1% I reported a week ago. To date, 180,259 shots have been given to Knox County residents, including 28,844 in the last week. 25.41% of county residents have gotten at least one shot, and 64,343 (13.7%) county residents are fully vaccinated.

Charity Menefee led yesterday’s press briefing for the Knox County Health Department yesterday and was joined by UT Medical Center’s Dr. Keith Gray. She pointed out that vaccine eligibility is now open to anyone over 16, including on the Knox County Health Department registration system. 50,000 reservations have been made on the system since the beginning, but only 5,600 remain to be scheduled.

The case metric remained green, though she noted there has been a plateau in daily case numbers. Regarding testing, she said lab turnaround time is still short (a day and a half), but testing numbers continue to drop locally and that benchmark is rated yellow. Vaccination rates are increasing, and she urged everyone to get vaccinated. The benchmark is green. The hospitalization metric continues to be rated green for deaths, she noted the recent decrease and the average number has dropped beneath 1 per day, but it will continue to be rated as yellow.

Dr. Gray said this may be his last briefing and he expressed thanks to the Knox County Health Department for their work. He said he is optimistic, but we need to remain vigilant. He said the drop in hospitalizations has been dramatic since the beginning of the year. Area hospitals now allow two visitors at a time for each patient. All hospital procedures have resumed.

During the question/answer session, Charity said they are encouraging high school students (16+) to get their vaccines, but they have no clinic designated just for them. They can only take the Pfizer vaccine at this time. Dr. Gray said his examination of the data indicates that Knox County is not seeing the dramatic disparities by race that other areas of the country have reported for either illness or vaccinations and he thanked the Knox County Health Department for their work in reaching out to local minority groups.

The University of Tennessee is reporting a steady increase in active cases over the last three weeks, with 108 currently active. New cases on campus are also trending upward, with 19 reported yesterday. Isolations have increased to 363, though no clusters have been reported in the last 10 days. Those participating in “required” testing programs declined again and is now at 45.9%. She said they are lifting restrictions for buildings with over 75% participation rates.

In the Chancellor’s update, Dr. Plowman strongly encouraged students to get vaccinated since the state has dropped age requirements. Dr. Gregg said UT will get more vaccine and want to encourage students to take advantage of that. He said UT may do mass vaccination clinics soon.