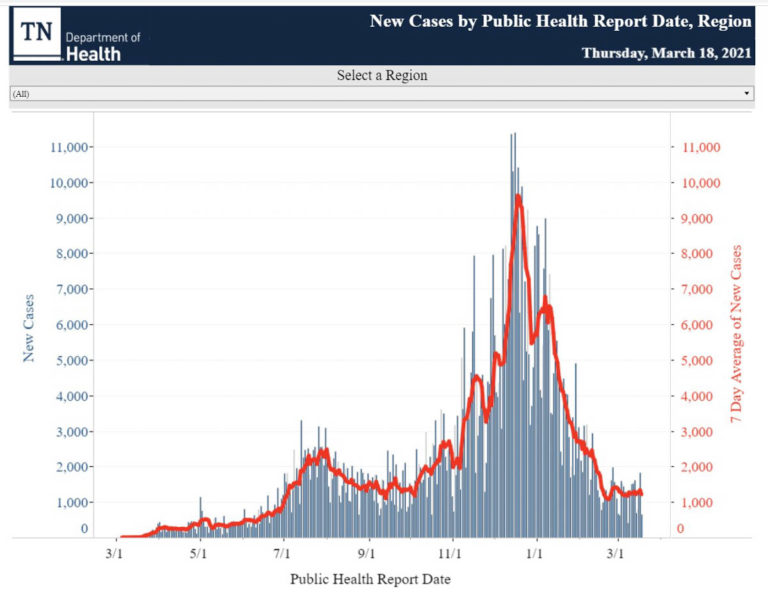 Tomorrow marks the beginning of spring and (unlike today), it promises to be sunny and cool, just like an early spring day should be. We are celebrating in our family by bringing my fully vaccinated uncle to his first family meal in a year. The isolation has not been kind to him, as is the case for many of our elderly family members. I am the only family he has seen in person (other than waving through his window at Knox High) since last March.

We will continue a bit longer to limit gatherings with the whole family, but Urban Woman and I are now fully vaccinated and it will just be us and the young ones who, of course, won’t be vaccinated for many months, but haven’t been around others. It feels a bit like normal, but also strange after a year apart. But we are happy to reach one small marker in the return.

After a single day at a more elevated level, testing fell once more to low levels in the state, having the inevitable effect of a low new case number. That said, the lower test levels are still producing reasonable positive test results, so they are not meaningless.

The state reported 661 new cases for the day, bringing case totals to 663,230 confirmed cases and 133,394 probable cases. 772,665 cases are considered inactive, while 12,278 Tennesseans are currently confirmed COVID-positive. This marks the tenth consecutive day active cases have remained between 12,000 and 13,000. The seven day average for new cases is 1,216 and has remained in the 1200 range for most of the month.

Thirty-five additional COVID-positive Tennesseans were admitted to hospitals across the state yesterday, bringing the total to 19,298 hospitalized since the beginning of the pandemic. As with case numbers, the precipitous decline in hospitalizations has leveled off. 659 Tennesseans are currently hospitalized with the virus, marking the eighth consecutive day in the 600s. For the same period, ICU and ventilator numbers have remained roughly in the area of 200 and 100, respectively, and currently sit at 204 and 105.

The state reported 23 additional COVID-19 deaths yesterday, bringing the state total to 11,681 since the beginning of the pandemic. As was the case yesterday, the seven-day average remains at eight COVID deaths per day in the state, a number similar to last July for the state.

Tests reported for the day totaled 7,869 and included a 6.8% positive test rate. Testing in the state appears to have fallen into a patter of about 8,000 tests reported most days, interspersed with 20,000 test report days. While the state frequently reported 40,000 or 50,000 per day in December, 20,000 seems solid for our current rate of spread, but we can’t seem to sustain that. The positive test rate is much better, but bears watching. If it goes up, we may see another increase across the board in other numbers. Johns Hopkins University has the seven-day average positive test rate for the state at 9.4% and increasing.

The number of vaccinations reported by the state slipped a bit, but remained in the 250,000 range. The state reports 2,075,483 shots have been given to Tennesseans and 246,757 were given in the last seven days. 18.18% of Tennesseans have gotten at least one shot and 727,744 (10.7%) are fully vaccinated. Among the 50 states, Tennessee is in a six-way tie for 43rd best in first vaccinations and in a three-way tie for 47th in the number fully vaccinated.

Thirty-three people continue to be hospitalized, which is the same number as yesterday. 1,297 Knox County residents have been hospitalized with the virus at some point in the last year. The number currently hospitalized has been in the 30s for ten of the last twelve days, reflecting the same stabilization seen at the state level.

Three additional deaths were reported today, the most for a single day in over two weeks. As mentioned previously, while the death rate should be lower going forward, a larger percentage of those who die will likely be in the younger groups as far more people in the older groups have been vaccinated. Of those reported today, two were in the 65-74 age group, while one was in the 75+ age group.

From the Knox County Health Department press briefing yesterday, little notable information has not previously been reported here. Dr. Buchanan pleaded with the community to continue following the five core actions and to remove their names from the health department waitlist if they get the vaccine elsewhere.

Chancellor Plowman took the opportunity of her weekly UT press briefing to muse about the past year, from the early fear and confusion, through the plans to bring students back to campus in the fall and spring. She noted that as well as things have gone, active cases have approximately double over the last week from around 30 to around 60.

Most of the increase is due to clusters related to gatherings, one of the most recent involving the UT football team. She pleaded with everyone to only gather safely. She made clear that the plans for fully in-person instruction on campus next fall is contingent on continued improvement in numbers.

This will be my final daily report, with weekly reports starting next Friday including coverage of international, national, state, and local COVID-related news. If you would like to monitor the situation yourself in the interim, here are the sites I use most frequently: