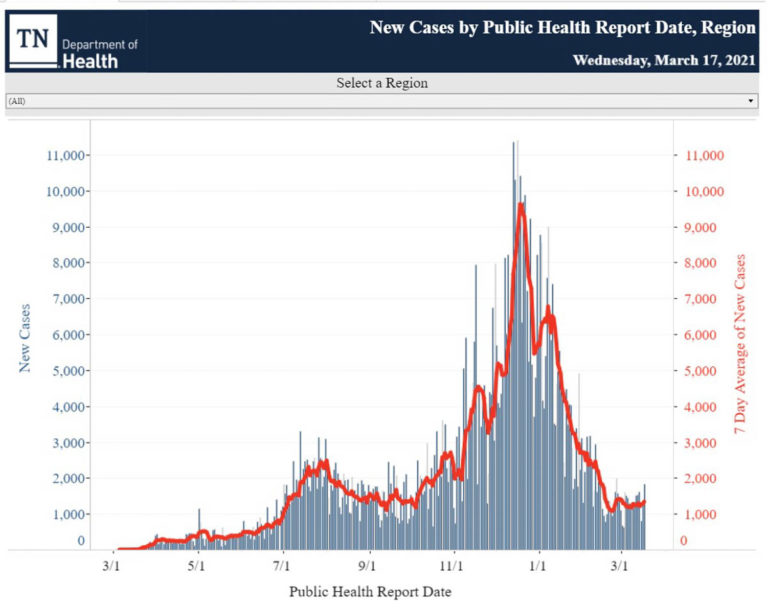 Even as signals mount that the return to something more normal looms, there are reminders that we aren’t there just yet. Cases and deaths are rising internationally, cases have leveled off in the U.S. and in Tennessee at similar levels to what we called a “surge” last July. We are getting close, and vaccinations could keep us from another surge, but quitting now can lead to bad results. Please continue to be careful and get a vaccine as soon as you are able.

The state reported 1,826 new cases of COVID-19 yesterday bringing state totals to 662,715 confirmed cases and 133,248 probable cases. 771,464 cases are considered inactive, while 12,841 Tennesseans currently test positive for the virus. Up almost 400 from yesterday, the active case count in the state has been stable for the last eight days, after dropping steadily for weeks. Over the last seven days the state has averaged 1,338 cases per day, its third consecutive day of small increases.

An additional 33 COVID-positive Tennesseans were admitted to hospitals yesterday, bringing the pandemic total for the state to 19,263. The latest report includes 663 current hospitalizations, down nine from the previous day, but marking the seventh consecutive day the number has fallen in the 600s. The precipitous decline in hospitalizations seems to have, at the least, paused. 197 COVID-positive Tennessee residents are currently in ICUs and 105 are on ventilators.

The state reported 8 additional deaths yesterday, bringing the pandemic total to 11,658 COVID deaths in the state. For the last seven days the state has averaged 8 deaths per day, the lowest it has been since July 4 (7). Considering we were averaging 135 deaths per day just six weeks ago, the number is truly remarkable.

The number of reported tests recovered to its typical post-holiday level of around 20,000 yesterday, with the state reporting 20,986 tests, with the pandemic total just over 7 million. The positive test rate for the day was reported at 6.83% and seems to have plateaued or to have risen slightly in recent days. Johns Hopkins University has the seven-day average at a higher 9.1% for the state.

The number of vaccinations for the most recent seven-day period continues to run over 250,000, with the state reporting 261,424 over the most recent seven-day period. A total of 2,037,675 shots have been given. 17.9% of state residents have gotten at least one shot, while 714,963 are fully vaccinated. The state dropped from a tie for 47th to 48th in first dose administration in the U.S. and after having tied for 49th for those fully vaccinated yesterday, the state is now in sole possession of 49th place.

Dr. Buchanan confirmed two local reporting changes at last night’s Board of Health meeting. First, the county will join the state in not reporting results on weekends. The change affirms my decision to move the summary report to Fridays (starting next week). Additionally, she confirmed that local vaccination totals would be updated Monday through Friday, rather than twice a week as was the case initially.

The Knox County Health Department is reporting 71 additional cases of COVID-19 today, the highest the number has been in the last five days. New cases totals for the county now site at 40,877 confirmed cases and 7,543 probable cases. 46,962 cases are considered inactive, while 860 county residents have an active case of the virus. To this point the county has trended differently from the state regarding active cases, as ours have continued to track downward.

Hospitalizations in the county have, however, tracked similarly to those in the state, with an apparent plateau having been reached in the 30s. The Health department reports 33 COVID-positive Knox County residents hospitalized as of today, up two from yesterday, which was up three from the day before. Nine of the last eleven days the number has been in the 30s. 1,292 Knox County residents have been hospitalized with the virus over the last year.

The state reports that over the last seven days, the county has averaged 9.3% positive test results. Vaccination numbers for the county indicate 148,210 shots have been given to Knox County residents. 20.48% of county residents have gotten at least one shot, and 53,630 (11.4%) county residents are fully vaccinated.

Both first vaccination and full vaccination rates remain ahead of state numbers. This rate of vaccination is not far off the average U.S. state rate, which is currently 22% and 12%. Additionally, local vaccination rates increased by 46% last week over the previous week, from 14,936 the week before, to 21,813.