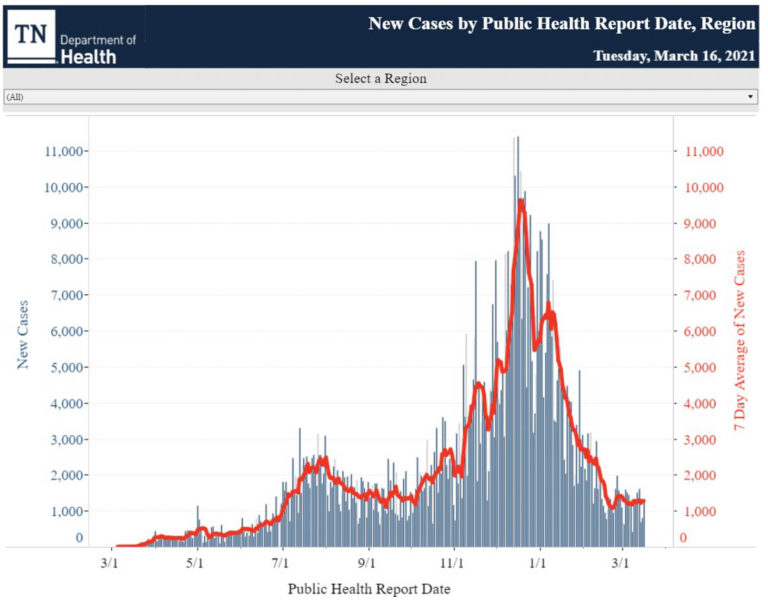 After 9 months of living in the city, Urban Boy says he wants to learn more about nature and might like to be a veterinarian (or a policeman with a dog). Urban Girl says birds sounds annoy her with all that chirping business outside the window. I’m not sure what it all means and where they will land, but I’m starting to imagine long walks along the trails in Smokies. It’s getting to be that time of year.

The state reported 1,342 new cases of COVID-19 yesterday, bringing state totals to 661,487 confirmed cases and 132,650 probable cases. 770,011 cases are considered inactive, while 12,476 Tennesseans are currently confirmed COVID-positive. The number of active cases has plateaued at about the level the state hit in late June 2020. The average number of new cases is 1,271 and that number has remained steady for the last two weeks.

While hospitalization rates have dropped, COVID-positive Tennesseans do continue to be admitted to the hospital, including 53 yesterday. 19,230 have been admitted to the hospital at some time during the pandemic, and 674 are currently hospitalized. This number reflects an increase of 15 from the prior day and marks the second consecutive day of increases. Numbers in ICUs (205) and on ventilators (109) also increased. The numbers remain a fraction of their previous highs, but the declines seen in previous weeks have, at least, paused.

Twelve deaths were reported from COVID-19 yesterday, continuing at a much lower level than two months ago. The seven day average for deaths in the state is now 9 deaths per day. It’s the first time this number has been below 10 since July 7, 2020.

The testing rate continues at a very low level, with the state reporting 8,867 tests yesterday, with a pandemic total now crossing 7 million. The state, which drew national praise for its testing program early in the pandemic, now ranks 29th in per capita testing. The state reported a jump in positive test percentages for the day at 9.28%. Johns Hopkins University has our seven day average at 8.7%.

The state seems to be sustaining the increased pace of vaccinations, as the seven-day rolling total is the highest I remember for the second consecutive day. 275,937 vaccinations have been given in the last seven days. The state has given a total of 1,997,911 shots, with an increasing number of those the J&J single-dose vaccination.  17.56% of state residents have gotten at least one shot and 701,316 Tennesseans are fully vaccinated. Despite the increased pace of vaccinations, Tennessee continues to rank low in U.S. comparisons. The state is tied for 47th in first dose administration and tied for 49th for those fully vaccinated.

The Knox County Health Department is reporting 47 additional confirmed cases of COVID-19, leaving current totals at 40,806 confirmed cases in the county and 7,502 probable cases. 46,765 cases are inactive, while 947 Knox County residents are currently confirmed COVID-positive. It’s the first time that fewer than 1,000 county residents have had confirmed cases since October 10 (993) and is the lowest total since October 2 (924). Since active numbers were calculated differently prior to October 1, any further comparisons going forward are not possible.

The state is reporting an 11.5% positive test result rate for the County, a 3% increase from just the day before. Vaccination numbers have been updated for the county and indicate 144,289 shots have been given here. 19.86% of county residents have gotten at least one shot, and 52,077 (11.1%) county residents are fully vaccinated. Both first vaccination and full vaccination rates remain ahead of state numbers.