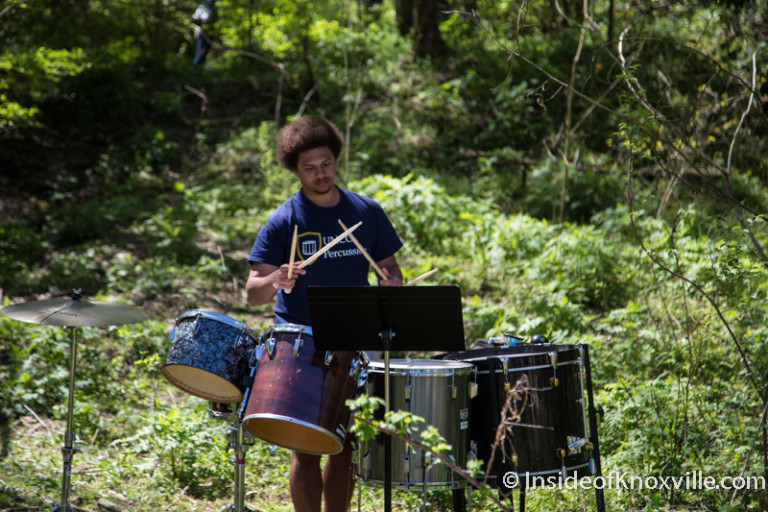 For many downtown restaurants,  hotels and other businesses, the weekend the Big Ears Festival comes to town is their biggest of the year. 20,000 tickets were sold to the festival in in 2019, with fans and musicians traveling from all fifty states, as well as two dozen countries. Attendance was growing at 20% annually prior to the pandemic and the economic impact was estimated at $6.7 million. And that does not measure the long term impact of coverage for the festival and city in publications like the New York Times, Rolling Stone and the Guardian.

Given all of the above, many local restaurants and other businesses which struggle through the winter, received a gut punch when the festival was cancelled in 2020. The festival takes a year or more to put together making a 2021 festival also an impossibility because of the uncertainty surrounding the COVID epidemic. I spoke to Ashley Capps to learn more about how the organization has weathered the last year and what we might expect in coming months and beyond.

He said calling off last year’s festival was very painful, but became the obvious call as concern regarding the virus was increasing rapidly. For this year, he said it just didn’t feel smart to try to do a version of the festival with the ongoing uncertainty. He said there will definitely be a festival in 2022 and it felt right to press pause for now in order to make that festival the best it can be.

As it has been for every organization, particularly performance-based entities, the year has been a strange one. After coming to terms with the potential duration of the pandemic, they never considered moving the festival to the fall. Initially assuming 2021 would mark the return of the festival, everything was booked for this month and the festival was planned as a two weekend event.

By the fall of 2020, it was clear a large festival would not be practical for this spring. A shift in focus for 2021 to smaller, more manageable events, with continued bookings for 2022 produced some interesting upcoming local experiences, and a half-booked 2022 festival a year in advance. The past year strengthened the foundation, Capps noted, with an expanded Board of Directors and allowing time for everyone involved in the festival to slow down enough to give thought to long term goals and plans.

He said there was never a consideration of ending the festival series, saying they are a lean organization and that helped them weather the year. He also noted their supportive fans, many of whom opted to allow their 2020 ticket price to become a donation, rather than requesting a refund. Sponsors also remained supportive. The support served to “focus our attention on how much this means for the community and renewed our commitment to keeping it moving forward.”

He didn’t want the time to pass without offering something to the community and he feels they’ve come up with the perfect piece in John Luther Adams’ Inuksuit performed by “acclaimed Knoxville-based contemporary music ensemble,” Neif-Norf (I profiled them here). The group has performed the piece in the past and Big Ears presented a performance in 2016 at Ijams. Neif Norf director Andy Bliss, a UT professor, has also previously collaborated with the composer. The photographs in this article are from that amazing day.

The piece itself is a percussive collaboration designed to be performed outdoors and to incorporate sounds of the natural world as a part of the aural experience. As such, the musicians are stationed widely apart, generally throughout a wooded area. Participants are encouraged to move along trails and spaces between performers throughout the duration of the 70 minute piece, allowing for the sounds to shift, merge, and shift again. Each person enjoys a different experience.

The obvious advantages to performing the piece at this time include the combination of an outdoor setting, with social distancing possible for both musicians and those enjoying the music. Designed to celebrate the natural world, with the advent of spring and in a hopeful moment in the pandemic, it is a celebration of both.

As a small bonus, “The concert will open with Yaz Lancaster’s 2019 composition, sequoia, a 10-minute piece scored musicians performing on an array of ceramic flowerpots. The work is a paean to the mighty endangered sequoias and a plea to interact with the natural world with greater grace.”

Two performances of the piece will be presented on April 18 at 2:00 pm and 5:00 pm at the beautiful Knoxville Botanical Gardens. The performances are free and while each will be the same, the public is welcome to attend either or both. The performances were made possible by grants from the Aslan Foundation and Moxley Carmichael.