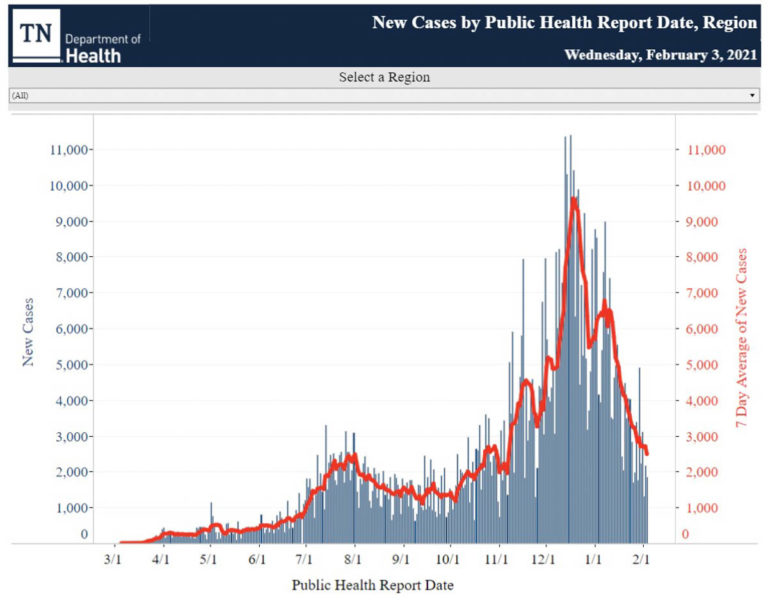 Welcome to Friday-eve as Urban Boy is fond of saying. Of course, he is a fan of calling Monday “Friday-eve-eve-eve-eve.” Teach a boy his days of the week and how to count and create a monster. Of course, he’s just counting down the days to retirement in any case. As I write, he is rolling his snazzy school chair back-and-forth past my desk, using it as a sled. I guess his Friday-eve is going OK. I hope yours is, too.

Yesterday afternoon, the state reported 1,856 new cases of COVID-19, bringing totals to 620,684 confirmed cases and 112,532 probable cases. 693,707 are inactive, while 29,476 Tennesseans have active cases of the virus. New cases and active cases continue to plummet. The average number of new daily cases over the last seven days is 2,487, the lowest it has been since November 6.

86 additional COVID-positive Tennesseans were hospitalized, bringing the pandemic total to 17,362. After leveling off for three days, the free-fall in hospitalization numbers continues, with 1,483 currently hospitalized with the virus, down over 60 from the day before. Continuing their slower decline, 430 with the virus are in ICUs, while 236 are on ventilators.

Deaths continue to remain stubbornly high despite the drops elsewhere. If the other numbers are accurate, and they appear to be, deaths should begin a decline very soon. The state reported 133 deaths yesterday, bringing the state total across the 10,000 mark to 10,033. In doing so, Tennessee becomes the 14th state to report at least 10,000 deaths. For the last seven days the state has averaged 102 deaths per day.

Testing continues to be reported at a very low rate, which appears to reflect a lack of demand. The state reported 12,728 tests yesterday, as the pandemic total approaches 6.4 million. The positive test rate seems to have stabilized just above 10% after dropping dramatically. Yesterday’s number was pegged at 10.53%, which Johns Hopkins University has the seven-day average at 13.1%.

While the pace has increased in the state over the last two weeks, we are still not near a pace to vaccinate all residents by year’s end. At the current pace, 100% of Tennesseans would be vaccinated by 590 days from today, or by September 27, 2022. To finish the process by late this year, we would need to start administering 60,000 shots a day right away.

The Knox County Health Department reported 100 additional cases today, bringing county totals to 37,590 confirmed cases and 5,886 probable cases. Of these, 40,684 are considered inactive, while 2,302 Knox County residents have known active cases at this time. The active number continues to drop and remains at the lowest level since December 6.

The current hospitalization census for COVID-positive Knox County residents also continues to drop, with 78 currently in the hospital, bringing the pandemic total to 1,148. The current number is the lowest since November 14 (76).

Two additional deaths were reported today, including one person between the ages of 45-64 and another 75+. As with the state, deaths have yet to follow cases, hospitalizations, and positive test rate in declining. The first four days of February have outpaced the first four days of January 14-9 in total deaths in the county.

The state is reporting a 14.3% positive test result rate for the county. The number has consistently remained several points above the state percentage.

In related news, Paul’s Oasis was fined $7,000 and lost its beer license for 60 days due to repeated violations of the Knox County Board of Health Mandate that restaurants and bars serving alcohol must close by 10 pm (It is now 11pm but was earlier when the citations were given.). The fine must be paid in order to resume selling beer.

Charity Menefee started today’s meeting by acknowledging Black History Month and expressing thanks to African American organizations which have helped the KCHD throughout the pandemic.

She said the focus both this week and next is on second doses for those living in congregant settings. She said this will likely drop the totals of vaccines given over the next week. She said there will be other opportunities with other providers for first vaccines. That information should come soon. More than 45,000 doses (first and second) have been administered in the county since the December rollout, which she noted, is more than the total number of cases since the beginning of the pandemic.

She confirmed the above numbers and reviewed the benchmarks (reported yesterday and available here). She said we are averaging about 139 new cases per day, which is encouraging but, she said, too high. She said testing continues to be low and they hope that means there is a low level of disease impact. Test turnaround time is about two days. She called the reduced levels of hospitalizations as “still high.” There have been 56 deaths in this period, which is down slightly.

After a drop to begin the week, the Knox County School system is, once again, reporting an increase in active cases and isolations or quarantines. The system reported 187 active cases at the end of the school day yesterday, up from 170 the day before. Of these, 134 are students and 53 are staff members.

All metrics remain the same, with student and teacher attendance rated green, cafeteria and bus service rated green, and custodial service rated yellow, while substitute availability remains red. The current list for virtual-only instruction includes one additional school since yesterday, with the inclusion of the L&N STEM school:

The University of Tennessee is reporting 107 active cases. While the total is unchanged from the previous day, the internal numbers shifted a bit to include 92 students and 15 staff members. 2,637 students and staff have recovered, while 9 new cases were reported.

Isolation and quarantine numbers continue to remain stable at 275, down seven from the day before. Of the 275, 46 are staff members, 92 are residential students, and 137 are non-residential students. No additional clusters were reported, leaving that number at three, with one on campus and two off campus.