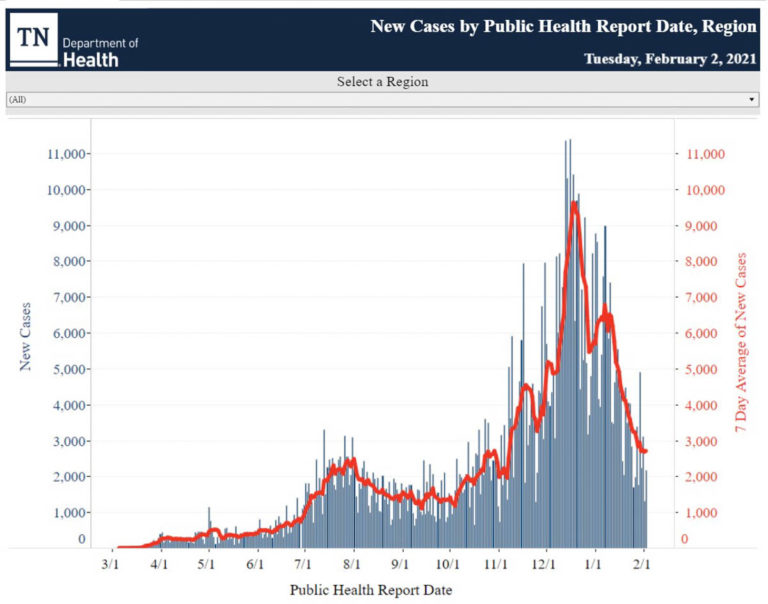 Quitting is always a tricky proposition. When has a relationship run its course? When does it make sense to walk away from a job or a career? When do you recognize that something you have pursued for a long time no longer makes sense?

I’ve been thinking about this recently regarding my COVID coverage. I am not ready to stop, but the time will necessarily come. I started out of necessity. No story mattered more at the local level as it has impacted everything I write about regarding downtown Knoxville. Additionally, many of the topics I usually covered disappeared. There were suddenly no concerts, plays, or festivals. There wasn’t really a choice.

As we approach the anniversary of my coverage of the virus, I will be watching for an apparent long-lasting reduction in cases and deaths, a long-lasting decline in hospitalizations, and a vaccination program that has reached some sort of critical mass. I’ll be looking for when the balance tips toward a return to more normal activities, when other news is more pressing than the medical update. We are not there, yet, but there will have to be a time to begin the process of returning this website to “normal.”

The topic recently took on more relevance as I saw some of the primary sites tracking the virus begin to shut down or return to their original functions. Rt.live, which had been a staple for many, including some of you, with their updates of spread via Rt values, has announced they feel their function is now better served by others and they have ceased pulication. The first source to which they refer former users, the COVID Tracking Project, has announced they too will stop their work early next month.

Tennessee reported 2,172 additional cases yesterday, bringing pandemic totals in the state to 619,612 confirmed cases and 111,748 probable cases. Of these, 688,963 are considered inactive, while 32,947 Tennesseans currently have an active case of the virus, the lowest number of active cases since November 13. The seven-day average for new cases is 2,708, reflecting a slowing in the rate of recent declines.

104 additional Tennesseans were reported hospitalized with COVID-19, bringing the pandemic total to 17,276 hospitalized with the virus at some point during the pandemic. 1,547 are currently hospitalized, less than half the peak reached in early January, but higher than the day before, as the steep declines seem to have paused. 446 are currently in ICUs and 248 Tennesseans are on ventilators. Each of these numbers have also paused around current levels for the last few days.

Deaths in the state continue at high rates even as all other numbers have fallen. Tennessee reported 147 deaths yesterday, bringing the state total to 9,900 who have died of the virus since the beginning of the pandemic. For the last seven days the state has average 106 deaths per day. The anticipated decline in deaths given recent declines in cases and hospitalizations has yet to arrive.

The state reported 10,080 tests yesterday, 20% to 25% it was routinely reporting in December. The total number of tests given is over 6.3 million and the positivity rate for the day was reported as 12.81%. Johns Hopkins University reports a seven-day average of 13%.

According to the New York Times vaccine tracking site, Tennessee isn’t doing as well as many states on getting the first shot out but is faring better than most at getting the second shot accomplished. The state ranks 44th on first shot distribution, but 7th on second shot distribution. At the current pace, 100% of Tennesseans could be vaccinated in the next 574 days, or by August 31, 2022.

The Knox County Health Department reported 105 new cases of COVID-19 among county residents, bringing our totals to 37,490 confirmed cases and 5,817 probable cases. 40,397 county residents have an inactive case, while 2,422 people have an active case of the virus. The active number is the lowest it has been since December 6 (1,982).

1,150 COVID-positive Knox County residents have been hospitalized at some point in the pandemic and the number is currently 80. Numbers of hospitalizations have plummeted locally since early in January, as they have at the state and national level. Today’s number is the lowest since November 15 (79).

Updated metrics for the county include yellow ratings for new cases, testing and hospital capacity. The rating for new deaths remained red.

No word on the new website and waitlist option for the county.

Active cases at UTK stabilized for the day, dropping by one after a recent steady increase. The University is now reporting 107 active cases, including 91 students and 16 staff members. 2,627 are considered recovered, while 8 new cases were announced. 282 are in quarantine or isolation, up from 270 the previous day. Of these, 133 are non-residential students, 102 are residential students and 47 are staff members.