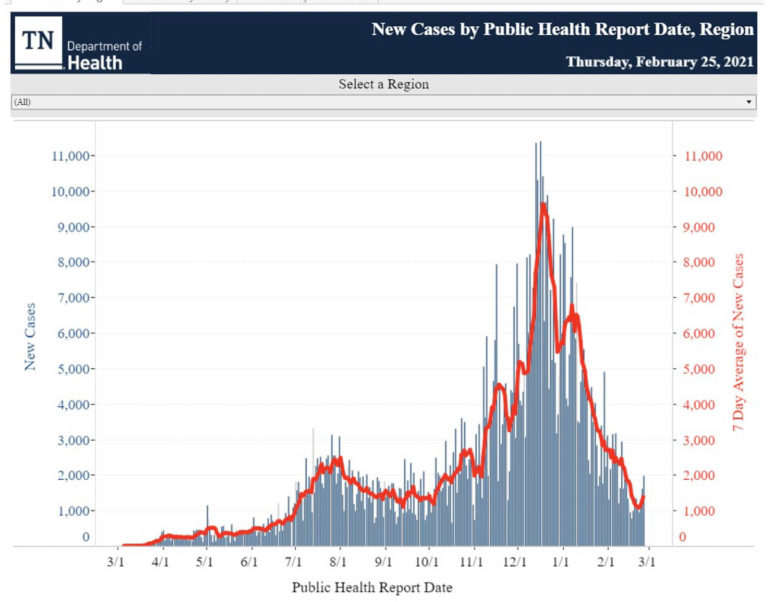 Welcome to Friday and 40 days and 40 nights of rain headed our way. Or maybe six, but it’s a lot. I usually try to find some little hook to give you in front of each article. Today’s hook is serious. It is there if you look at international, national, or state daily COVID-19 case graphs. After precipitous declines at every level, there is a slight turn upward. The seven-day average for new cases has increased three consecutive days in Tennessee and in the U.S. It has increased five consecutive days internationally.

Will it be simply a pause on our return journey to normal? Will it grow into a significant set-back as we struggle to vaccinate enough people to ward it off? The answer lies, to some degree, in our hands. If we have decided the pandemic is over and we can now party like its 2019, we could quickly find ourselves in trouble. If we continue the steady work of vaccinating while avoiding gatherings, wearing masks, remaining socially distanced and the rest, this may simply be a blip. What will you do?

The state of Tennessee reported 1,994 new cases of COVID-19 yesterday afternoon. Pandemic totals in the state have now reached 646,494 confirmed cases and 124,446 probable cases. 745,200 cases are considered inactive, while 14,419 Tennesseans currently have an active case of the virus. It’s the lowest number of active cases in the state since October 4 (14,229).

The continuing drop in active cases may be reversed in the coming days if the trend in new cases reverses course, as it is showing some signs of doing. The seven-day average in Tennessee has risen for the last three days. After dropping almost every day since January 10 (6,511), and hitting a recent low of 1,075 (2/22), the seven day average has increased to 1,377. It should be noted that testing has increased over those three days.

New hospitalizations also seem to be reversing course and climbing, once more. The state reported 76 new COVID-19 hospitalizations yesterday, bringing the state’s pandemic total to 18,506. Total current state hospitalizations also appear to have stopped dropping or, perhaps to be rising slowly. There are 988 COVID-positive Tennesseans in the hospital, up 18 from the number reported the day before. 267 of these are in ICUs and 135 are on ventilators.

The state reported 55 deaths from the virus, bringing the pandemic total to 11,321. The seven-day average for deaths from the virus peaked at 135 on February 5, before taking a rapid downturn to a low of 24 on February 19. The incredible two-week drop, while wonderful, is a reminder that these numbers can change rapidly. In the last seven days, that number has risen to 38 (it was 40 the day before).

While we have reason to expect the death rate will not rise to previous levels, as major portions of the oldest and most vulnerable populations are vaccinated, deaths can and will continue to rise if we return to previous behaviors. Our county has experienced a significant number of deaths among the 65-75 age groups in recent weeks and that population will not be significantly vaccinated for weeks.

As noted above, part of the explanation for the higher case numbers is a return to higher testing numbers. The state reported 25,704 tests for the day, bringing the state pandemic total to about 6,735,000, or remarkably close to an average of a test for every citizen in the state. Yesterday’s total was the highest in about two weeks and, in very encouraging news, the tests carried a 6.45% positivity rate. It’s very close to the goal of 5%. Johns Hopkins University is reporting a 10.3% average positive rate for the last seven days, down from 11.4% just a few days ago and due, no doubt, to the increase in testing.

I solved some of the mystery of shifting numbers on the state vaccination site. The state updates every number on the except the current day initially, then later in the day updates the daily numbers. I was catching it in transition, and I think I’m on track with them, now, though I’m still not sure their data is completely aligned.

The state is reporting 1,245,604 vaccinations have been given, including 13,346 yesterday and 167,785 for the previous seven-day period. 430,568 Tennesseans are fully vaccinated, while 11.58% of state residents have had at least one shot. The pace has essentially recovered from the reductions last week and is about 40% to 50% of a pace that would cover us by the end of the year.

At the current pace of vaccination, the entire state would be vaccinated 518 days from today, or by July 29, 2022.

55 Knox County residents are currently hospitalized, bringing the pandemic total to 1,245. The hospitalization rate, after dropping sharply from a high of over 200, has stabilized in the 50 – 70 range, where it has remained for the last 18 days. The number has been in the 50s for the last week. Today’s number is up three from yesterday.

The rate of deaths in the county, while slower than the months of December and January, continues to to be high relative to all other months. In the first four months of the pandemic, for example, five people died locally of the virus, while today, four deaths were reported, bringing the county total to 535. Of the four who died today, one was between the ages of 65 and 74, while three were 75 or older.

The Knox County School system is reporting 91 active cases of COVID-19, up one from yesterday’s record low for recent months. The number includes 67 students and 24 staff members. 3,274 students and staff have recovered from the illness, while 857 are currently in quarantine or isolation. The quarantine/isolation number is up seven from yesterday but remains around the lowest level since the first days of the semester. Among the 857, are 780 students and 77 staff members.

Teacher and student attendance, bus service and cafeteria support continue to be rated green, while custodial support maintains its yellow rating and substitute availability at red, where it has been for most of the year. All schools are currently offering in-person instruction.

The University of Tennessee is reporting 78 active cases of COVID-19, down nine from the day before. The number has remained in a tight range for weeks. 2,885 students and staff have recovered, and the university confirmed three new cases. 377 are currently in isolation or quarantine, including 38 staff members, 222 residential students, and 117 non-residential students. No additional clusters were reported.

Provost Dr. Tom Zomchick led today’s briefing, while joined by others. He reported that in-person commencement will be held May 7,8 and 9. For the first time, commencement will be held in Neyland Stadium. By moving it there and having multiple ceremonies, the gathering will be made safer. The number of guests each graduate may invite will be limited. Those who graduated in 2020 but didn’t participate in a ceremony will be allowed to participate as much as is possible.

Dr. Gregg reported from U.T.’s vaccination clinic today where he reported they will vaccinate 900 people today. The weekly clinics are open to the public and will continue through the end of the semester. Signups are available here. The university will follow current phased guidelines.

Regarding the most recent cluster, a Phi Mu House, he said the cluster happened as the result of 1 positive test which necessitated 26 close contacts to isolate or quarantine, including all residents of the house. It resulted from the living arrangement, rather than an inappropriate gathering.

He encouraged participation in the pooled testing program, saying it is too low, even though it is required. He said that students who are not participating can expect negative consequences in short order. He stressed it is important for the university to maintain a safe environment.