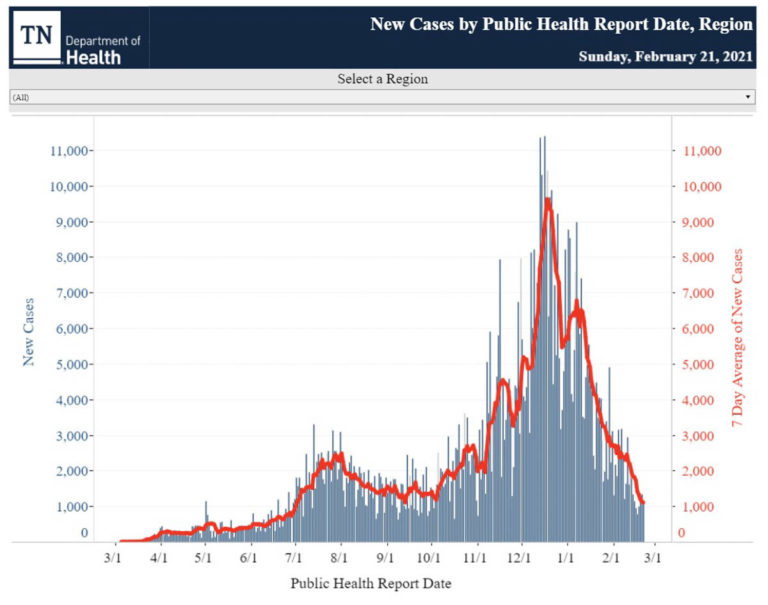 I hope you enjoyed the great sunshine and semi-warmth, yesterday. We have another couple of days of great weather this weekend and a week from today March arrives, the month when warm weather, green leaves and persistent flowers start winning the day. Get outside and celebrate. Keep working to stay well. If we can hang on a bit longer, summer will look so much better this year than last. If we let up a little too early, maybe not.

112 million people across the world have been diagnosed with COVID-19 since the beginning of the pandemic. The total includes about 2.6 million diagnosed within the last week. The decline in rate continues at a slower pace, with 2.7 million diagnosed the week before. The seven-day average for new cases is 360,381. While the number is about 25,000 lower than the week before, the average increased slightly yesterday, the first time a single day increase has been recorded since January 11, the peak of the new daily case rate. The current rate is like mid-October.

Almost 87.4 million people are considered recovered from the virus, while close to 22.2 million have active cases. Active case numbers dropped about 320,000 from the same day last week, continuing the downward trend, though at a slower pace than last week. Last week was the first week reported active case decline since January’s peak, with a drop of about 400,000.

Almost 2.5 million people have died of COVID-19 since the beginning of the pandemic, including about 65,800 in the last week. The number is about 13.8 thousand fewer than the previous week and the drop escalated over the previous week. The seven-day average for global deaths has dropped to 9,402, down over 1,800 from the same day a week earlier, and significantly down from the January 24 peak of 14,441. The current rate is similar to mid-November.

The U.K. is beginning to ease restrictions as case numbers and deaths have dropped there. Schools and family gatherings will be given priority as shops and restaurants remain closed. In a contrast to the U.S. where no private gatherings have been restricted, in the U.K., “two families or a group of six friends will be allowed to meet outdoors” starting in late March.

Australia begins its vaccination program today. The country has fewer than 40 active cases and fewer than 1,000 people have died during the pandemic. Hong Kong also began its vaccination program this week, with enough vaccine promised to inoculate its entire 7.5 million residents. Up to 50% have said they will not take the vaccine and distrust of the Chinese produced Sinovac is high.

The U.S. has reported just under 28.8 million cases of COVID-19, including about 500,000 in the past week. The rate continued to slow this week with about 200,000 fewer cases than the week before. About 19 million Americans are considered recovered from the illness, while about 9.3 million active cases are reported (down 200,000 from a week ago).

According to the numbers on Worldometers, the U.S. has now crossed the half-million mark in deaths from the virus, with 511,302 dead, including 13,886 within the past week. About 3,100 fewer Americans died this week than the week before.

Of all the things said along the way, I always remember President Trump saying that if we held deaths under 100,000, we would have done a good job. I remember, because at the time I did not think there was any way that many U.S. residents would die of the illness. At 500,000 deaths, the question seems less whether we did well and more whether we will learn from this and do better next time.

The U.S. is averaging 1,983 deaths per day, down from 2,569 a week ago. For the first time since the peak on January 26 (3,449), the average increased slightly yesterday (+18). The current average for deaths is similar to what the U.S. experienced in early December.

The U.S. continues to lead the world in cases (28.8 million to India’s 11 million) and deaths (511.1 thousand to Brazil’s 246.6) and the lead continues to expand. Among countries with at least one million in population, the U.S. remains third in per capita cases behind Slovenia and Czechia.

Among the same group, the U.S. now ranks seventh in deaths per million, up one spot, after surpassing the death rate of Bosnia and Herzegovina. The U.S. ranks first in total testing, but has dropped to 8th in per capita testing. In vaccinations, the U.S ranks third in those fully vaccinated, behind Israel (33.7%) and Seychelles (22.3%), at 5.7% fully vaccinated. The U.S. number increased from 4.2% a week earlier.

U.S. COVID-19 hospitalizations have dropped to their lowest level since November. The Novavax vaccine has fully enrolled its phase 3 testing volunteers. The vaccine is shown to be over 89% effective and could be deployed in late spring or summer. Live music is slowly re-emerging, though sometimes in different forms, such as the recent popup jazz concert at a field hospital in New York City. The stimulus bill looks to be headed for a vote within the next three weeks and appears to be supported only along partisan lines.

It’s another piece of accumulating data that this isn’t “just the flu.” Early statements that COVID deaths would simply replace other deaths and would only have a marginal net negative impact simply were not true. It is also important to note that this update to life expectancy does not include the second half of last year – which was much more deadly. The most recent similar decline came during World War II.

737,635 cases are now inactive, while 16,369 Tennesseans have an active case of the virus, about 7,500 fewer than one week ago. It’s the lowest number of active cases in the state since October 7.

An additional 32 COVID-positive Tennesseans were hospitalized yesterday, bringing the pandemic total to 18,267. The number of COVID-positive Tennesseans in the hospital continues to decline, if in an uneven and more gradual pattern. 1,008 are currently hospitalized, while 280 are in ICUs, and 164 are on ventilators. Hospitalizations dropped just below 1,000 on Saturday before rebounding. The number remains at less than a third of its peak earlier this year and is 109 fewer than a week earlier.

Since the last article, the state reported 7 deaths on Friday, 51 on Saturday, and 18 on Saturday. After dropping to 24 on Friday, the seven-day average for deaths rose to 29 per day as of yesterday afternoon. The current state average is similar to that reached in October.

Testing levels averaged a bit over 10,000 a day over the weekend, typical for recent weeks, but about 20% to 25% of pre-holiday levels. About 9,100 tests were given yesterday, bringing the state pandemic total to almost 6.7 million. The state reported a positive test rate of 8.11% for the day. Over the weekend, Johns Hopkins University reported a spike in our seven-day average positive rate, from 8.7% late last week to the current 11% rate.

As of yesterday’s update, the state is reporting 1,111,118 doses of the vaccination have been administered in the state, including 1,582 for that day and 87,185 for the previous seven days. The previous week the state reported over 180,000 vaccines were given. The massive drop is attributable, at least in some part, to the bad weather which interrupted supply chains. 366,665 Tennesseans have gotten both shots and 10.56% of the population has gotten at least one.

In the three days since the last report, the Knox County Health Department reported 101 new cases on Saturday, 62 on Sunday and 67 today. The total of 230 is 102 short of the previous weekend. Five of the last six days have seen new cases fall under 100. The 51 new cases reported yesterday is the lowest number since 44 were reported on October 17.

New pandemic totals for the county include 39,457 confirmed cases and 6,770 probable cases. 44,037 cases are now considered inactive and 1,665 Knox County residents currently have an identified active case of the virus. This is now the lowest number since November 15.

Fifty-seven COVID-positive Knox County residents are currently hospitalized, bringing the pandemic total to 1,228. When the number dropped to 51 yesterday, it became the lowest number in the hospital at a given time since October 7 (also 51).

While deaths have declined significantly in recent weeks, the health department reported four new deaths over the weekend (Saturday through Monday), which is twice as many as the previous weekend. Of the new deaths reported, one person was between the ages of 65 and 74, while three were over the age of 75.

The state is reporting a 12.9% positive test rate for the county, down from 13.3% reported a week earlier.