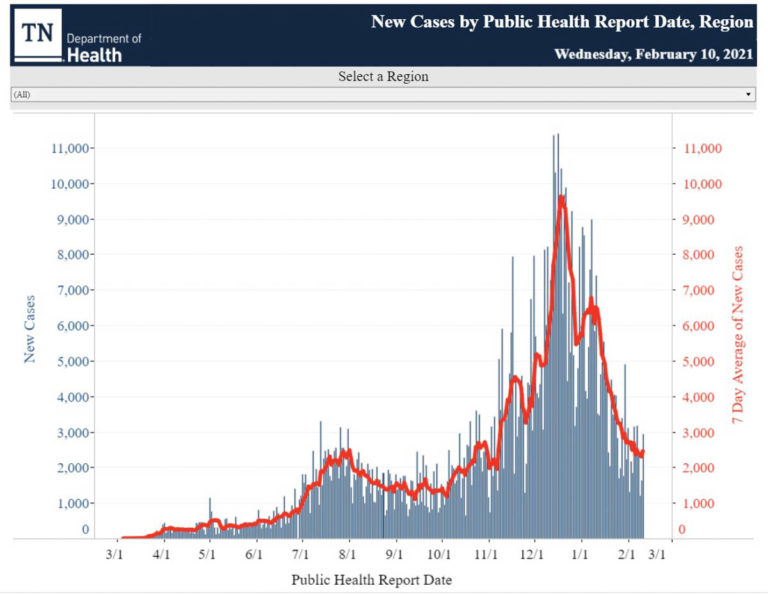 I hope you grabbed a little of that warm sunshine yesterday. Urban Boy and I made it to Krutch Park for a little fun. Meanwhile, dreary cold days of winter appear to be good for rising ambitions. Urban Boy (age 5) recently upgraded his professional aspirations from “retired” to “paleontologist.” The boy loves him some dinosaurs. Urban Girl (age 11), meanwhile, has moved from a vague “being rich,” to potential part-time pay as a professional sleep study participant. At least the pandemic is producing big dreams in the family!

The state reported 2,947 new cases yesterday, bringing pandemic totals to 632,860 confirmed cases of COVID-19 in Tennessee and 117,149 probable cases. 714,067 are considered inactive, while 25,611 Tennesseans have an active case of the virus. The average over the last seven days for new cases in the state is 2,457, up about 150 from yesterday. The dramatic decline in new cases seen over recent weeks seems to have at least paused.

An additional 91 Tennesseans were hospitalized yesterday with the virus, bringing the pandemic total to 17,786. The number of Tennesseans currently hospitalized with the virus dropped slightly from the previous day to 1,260. 368 are in ICUs, while 203 are on ventilators. While the dramatic drops in hospitalization numbers seen in the last five weeks seem to be leveling off, there is reason to hope the decline can resume, as many in the population most likely to require hospitalization are now getting vaccinated. In Knox County the number is put at 25%. The same might be hoped for deaths.

The state reported an additional 100 deaths from COVID-19, bringing the state pandemic total to 10,731. Average daily deaths have fallen off the peak, but have remained stubbornly high, currently averaging 99 per day. Every indicator suggests this number should drop significantly in coming days.

The Knox County Health Department reported an additional 136 cases of COVID-19 in the county today. After the precipitous decline in county cases, numbers seem to have stabilized, with new case totals falling between 100 and 200 on 20 days over the last month. The new cases bring the county totals to 38,497 confirmed cases and 6,248 probable cases.

42,099 cases are counted as inactive, while 2,134 Knox County residents currently have an active case of the virus. Active cases may have also plateaued, with active case numbers ranging from about 2,100 to 2,300 for the last seven days.

67 Knox County residents are currently hospitalized with the virus, bringing the pandemic total to 1,183 hospitalized at some point during the pandemic. Hospitalizations have ranged from a low of 58 (2/8) to a high of 86 (2/1) for the month. Current numbers seem to be suggesting a stabilization in this metric, as well.

Vaccination numbers will be updated for the county tomorrow. Of interest to me, given the above gender disparity, is that 63.7% of vaccinations have gone to women. I’ve asked the health department about the skew in vaccinations by gender. It could have to do with female over-representation among the populations vaccinated to date.

Covenant Health now has a signup system of their own and seem to be accepting appointments from those in approved groups. You can find more information and attempt to sign up here.

There was other significant local news in the last twenty-four hours. Of great concern is the report that 975 vaccinations have been lost. The KCHD held a gut-wrenching media briefing yesterday announcing the loss. A lot of questions remain as the state said they did send the shipment.

The KCHD said they believe the vaccines were discarded locally, but it is unclear how certain they are in that regard. Also, Pfizer is supposed to have a tracking device in each container, raising the question of why the company can’t give a definitive answer as to the location of the vaccines. The cases are unmarked and include no shipping information as a security measure. I’ve submitted further questions directly to the Health Department as they cancelled today’s media briefing (due to having held the unscheduled briefing yesterday).

Also since the last report, a ruling was rendered regard repeated violations of the Knox County Board of Health regulation on 11pm closures for businesses selling alcohol. The city asked for a suspension of Billiards and Brews Beer beer permit for 75 days. The hearing officer, citing the repeated disregard for the law, suggested the owner is unrepentant and therefor revoked the permit all together. You can read the full case summary and decree here.

Mayor Kincannon issued a statement regarding the revocation:

Billiards & Brews is by far the single most flagrant violator of the Board of Health’s pandemic safety measures. Testimony from the Knoxville Police Department, in fact, showed that the bar’s 18 citations over three months set a record for the most in recent memory. The bar owner and managers repeatedly made conscious decisions to violate the law, and those decisions – during a health emergency that has killed more than 500 Knox County residents – put our community unnecessarily in greater danger.

Another hotspot on the local COVID-19 radar in the last twenty-four hours was the meeting of the Knox County School Board. Required mask wearing was a topic added at the last minute to the agenda, reflecting specific concerns that athletes could perform while not wearing masks, but not so arts students. The policy was continued, but not before many members of the community, one of whom as in tears, pled variously for no mask requirements, no contact tracing, and no more “red” status for schools.

After dipping to 170 active cases yesterday, the Knox County Schools report active cases have now risen to 183. 130 students and 53 staff members are included. 2,985 students and staff have recovered, while 1,894 are currently in quarantine or isolation, up over 230 from the day before.

Of the 1,894, 1,708 are students and 186 are staff members. The struggle many parents must face when children are sent home to quarantine, no doubt fuels some of the frustration expressed at last night’s board meeting.

The only change in metrics from yesterday reflects and improvement, with the metric for substitutes taking a rare turn as yellow, after remaining red for most of the year. Perhaps some substitutes have gotten vaccinations and are are more comfortable returning to schools? It could also be that lower apparent spread in the community has brought some back. As was the case yesterday, only one school remains on virtual-only status:

The University is reporting a minor increase of three active cases to from the previous day to 88. The number has been relatively steady just below or above 100 active cases for the last two weeks. It’s a similar level to which the university population settled last semester after the initial surge.

2,724 students and staff have recovered from the virus, while four new cases were confirmed yesterday. 307 students and staff are currently in quarantine or isolation. The number isn’t dramatically higher than previous days, but the total is the largest reported by the university since December 2 (438). Included in the 307 are 51 staff members, 150 residential students, and 106 non-residential students. The last three days have seen residential totals top off-campus student totals for the first time since last September.

Two additional clusters have been identified. Both are on-campus sorority houses. Alpha Chi Omega had a cluster identified February 7, and Zeta Tau Alpha had a cluster event the next day. University officials have said that the more communal nature of Sorority Houses makes them much more likely for cluster events than the differently designed Fraternity Houses on campus.