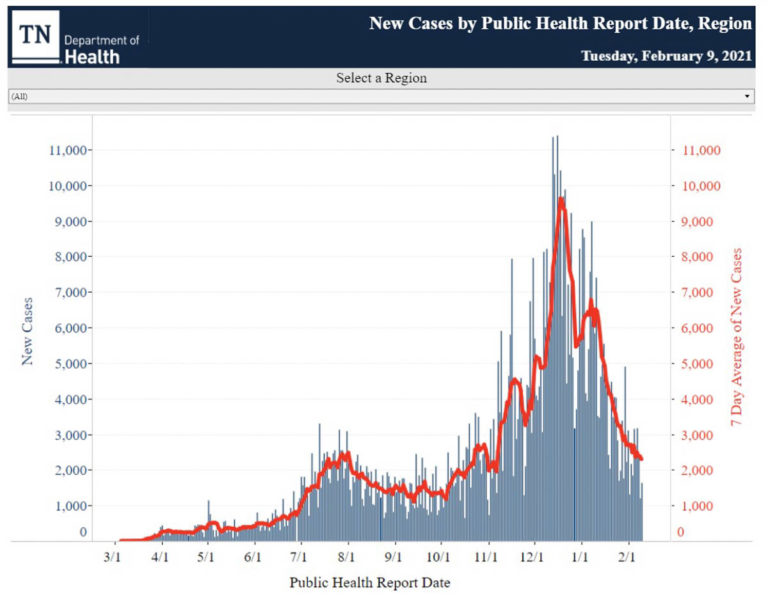 I hope your week is going well. Today is one of those little gifts we get in east Tennessee during the month of February. Grab the sunny 61 degrees and get outside for a long walk while you can! We will likely see more snow before we see 60 degrees again. Enjoy!

New cases reported in Tennessee yesterday afternoon totaled 1,636. The state has now reported 630,739 confirmed cases and 116,723 probable cases. Of these, 710,742 are inactive, while 26,089 Tennesseans have an active case of the virus. Active case numbers have dropped by about 6,500 in the last week. Average daily new cases, currently 2,300 per day, down about 400 from a week earlier.

An additional 91 COVID-positive Tennesseans were admitted to state hospitals yesterday, bringing the pandemic total to 17,786 hospitalizations. The number of COVID-positive patients currently in the hospital dropped by one from the previous day to 1,282, while ICU and ventilator numbers each rose slightly to 386 and 207, respectively. The sharp downturn in hospitalizations seems to have leveled off or at least slowed.

65 addition deaths from the virus were reported yesterday, upping the state total to 10,631 deaths from COVID-19 since the beginning of the pandemic. Average daily deaths have dropped from a record 135 five days ago to the current seven-day average of 105 per day.

Testing dropped further from the previous day’s low number to 8,984, about 20% of pre-holiday levels. The state has given a total of almost 6.5 million tests since the beginning of the pandemic. For the day, the state reported an 11.44% positive test rate, while Johns Hopkins University pegs the seven-day average at 10.5%.

Through yesterday, the state reported a total of 876,342 vaccines have been given, including 7,618 the previous day, and 165,886 for the week. 273,867 Tennesseans have gotten both doses of the vaccine. At the current rate, every Tennessean could be vaccinated in the next 539 days, or by August 3, 2022. The rate of vaccination seems to have stabilized at a higher number than a few weeks ago. To have a chance at completing the vaccines by the end of the year, the state needs to roughly double the current rate.

The Knox County Health Department is reporting an additional 101 confirmed cases of COVID-19 in the county. Totals have now reached 38,361 confirmed cases and 6,202 probable cases. Inactive cases now total 41,890, while 2,164 people have active cases of the virus. While the number of active cases is within one-to-two hundred of recent levels, it marks the lowest number reported since December 6.

After precipitous declines, hospitalization numbers have risen for the second consecutive day, from 58 on Monday, to 62 on Tuesday and 70 today. Numbers remain far below highs and even lower than a week ago, but there does seem to be an indication that hospitalizations may be, at the least, leveling off in the county, as they are at the state level. The pandemic total for hospitalizations from COVID19 in Knox County is 1,181.

After significantly reduced numbers of daily deaths in recent days, the Knox County Health department reported seven COVID-19 deaths today, the highest daily total so far this month. Of the seven, one person was between 18-44 years old, two were between 45-64, and four were 75 years old or older. Total deaths from the virus have reached 509 in Knox County.

The state is reporting a steadily improving 11.4% positive test result for Knox County. Benchmarks had not bee updated as of the time of this publication. You’ll also notice the trendline reflecting the entire pandemic has been replaced with two trendlines, including one for the last 14 days and one for the last 28 days. The two reflect the recent decline, though the fourteen-day trendline shows the decline has slowed slightly.

The most recent vaccination numbers for Knox County, and updated on 2/9 and reflect 56,424 shots have been given in the county. 17,409 Knox County residents are fully vaccinated, while 38,942 have had the first shot only. 8.28% of county residents have had at least one shot. The numbers should be updated again on Friday.

The Knox County School System is reporting 170 active cases among students and staff, down five from the previous day and below recent highs. Of the 170, 125 are students and 45 are staff members. 2,963 have recovered and 1,663 are in isolation or quarantine.

Isolation and quarantine numbers have dropped sharply in recent days, including a drop of about 250 from the previous day. Of those isolated or quarantined, 1,508 are students and 155 are staff members.

Metrics have settled into their most common pattern for the year, with student and staff attendance, and cafeteria and bus support in the green, while custodial support is rated yellow and substitute availability is red. After having all schools offering in-person instruction yesterday, Vine Middle School was added to the virtual-only list:

For a second day in a row, the University of Tennessee is reporting 85 active cases, including 70 students and 15 staff members. 2,716 in the university community have recovered from the virus and nine new cases were reported. 51 staff members, 128 residential students, and 110 non-residential students are currently under quarantine or isolation, for a total of 299. The total reflects an increase of ten over the previous day.

No additional clusters were reported, and weekly testing information will be updated early next week.