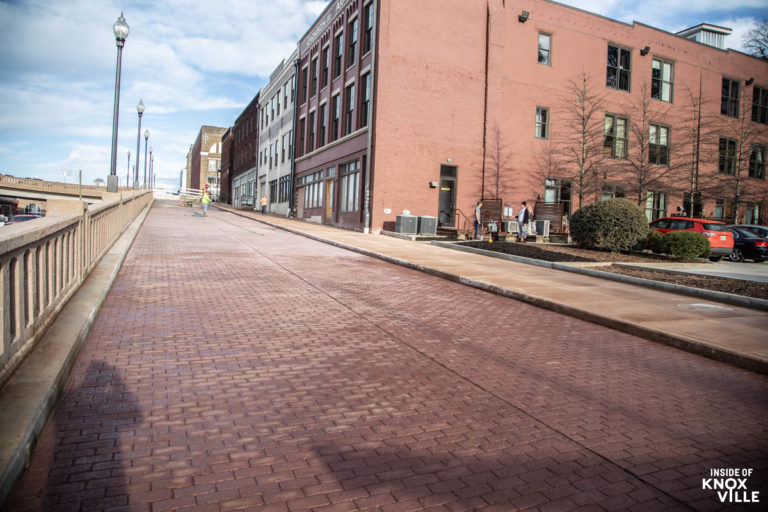 The Jackson Avenue Ramps were built 100 years ago. In that time they have had major repairs only once as a result of a TDOT determination a portion was unsafe in 2009. The first meeting to discuss the current replacement was held in 2006 and nearly ten years later, in 2015, TDOT accepted the proposed design that would eventually come to fruition.

The project, initially intended to be completed by September 2020, was delayed by three months. The western ramp is now open and the ramp on the east side of Gay Street should be open within the next couple of weeks. Ironically, the project which seemed so ill timed for Merchants, may have fallen at the perfect time, as business was already severely impacted by the pandemic. With the ramps open and hopes high for pandemic improvements by spring or summer, the Old City businesses may be poised for a significant rebound.

Each side of the ramp features pristine and wide sidewalks which, for those of us who remember walking the old sidewalks, is a welcome improvement. The ramps have the original bricks from the previous ramp repositioned on the top half of each ramp, with the lower half of each side formed with stamped concrete to simulate the look of the brick.

An effort was made, beyond the bricks, to extend the older look of the viaduct. Light fixtures along the outside of the ramps is the older style, similar to what is found on Gay Street. Additionally, the brick on the underside of the western ramp was selected to match the older brick, and the cement on the side balustrades were sandblasted to emulate a weathered look.

The businesses that had formerly lined the viaduct were forced to move out during construction, but those retail spaces are available once more. Regarding those businesses and the others impacted by the long closure, Mayor Kincannon said the efforts

show that we are trying to support local businesses while improving infrastructure. This may not have been the worst time to get this work done. We appreciate the business’ patience. We have to ensure safety, but design and aesthetics matter. We are grateful the project is functional, but beautiful.

The underside of the western side of the viaduct has some possibly usable space and Rick Emmett, Downtown Coordinator for the city, said the city will entertain possible uses for the space. The underside of the eastern portion of the viaduct will contain KUB utilities and equipment and will not be usable. Access to the portion of underground Gay Street, some of which is usable on that side, will continue to only be available via the bottom floor of the Emporium.

As she prepared to step inside Sweet P’s for some carry-out barbeque, the mayor added,

I think the bridge looks beautiful and I am sure it will activate the area for driving and walking around downtown. This will invite people to come explore the Old City and Jackson Avenue. I invite everyone to come and enjoy.

According to Ryan Henley with Vaughn and Melton Engineering, the east ramp should be open in a couple of weeks.