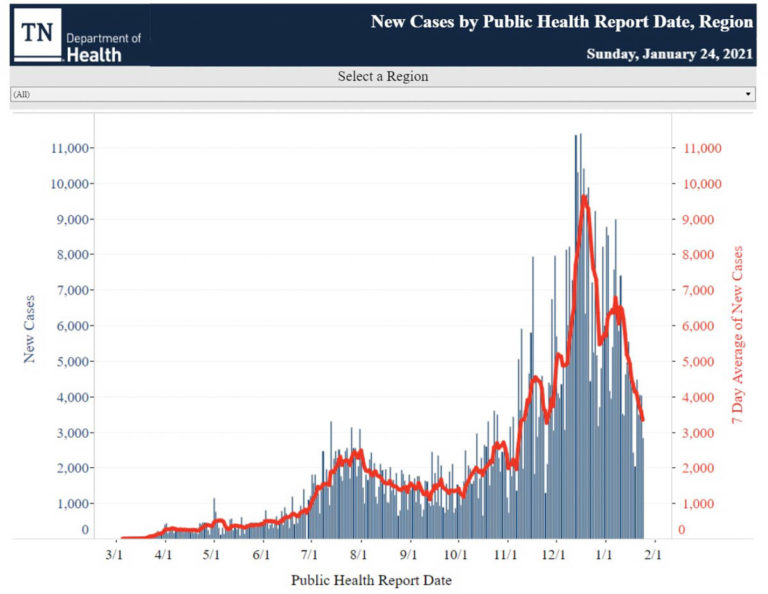 I hope you had a wonderful weekend. I was able to get out and explore a couple of different parks I hadn’t tuned into for a while. Family movie night this weekend included “Big,” which the kids really enjoyed. It did leave me wondering if the meaning of PG has shifted a bit. Quite a bit of language and a sex scene I’d forgotten about. I think most of it went past Urban Boy though he was curious why that woman took her shirt off. I may be failing at Parenting Redux.

A couple of thoughts as we start our discussion of the weekly numbers: It is clear we are seeing real declines in the pandemic globally to locally. A decline in cases might be explained by a decline in testing, but why would testing suddenly and sharply decline around the world? Even the U.K. where the new, much more contagious variant was first spotted is seeing declining case numbers. How?

Further, it isn’t simply case numbers. The percentage of people testing positive is dropping just as sharply. The number of people in hospitals is declining. It seems to me that deaths will soon follow. This we know. What we do not know is why. The decline was pronounced and simultaneously across the world. In nature change like that has a cause. So far, I’ve seen articles recognizing the change, but not speculating as to the cause.

It matters because if we knew the cause, we would gain insight into how the virus works. It also would help us predict whether we might see the same reversal upward at some point soon or distant. While the news is excellent and we are all pleased, it is critical to remember the virus is still very active and as many people as ever continue to die. The levels to which the virus has declined would have seemed horrifying just a couple of months ago. We have to continue to fight spread on a personal level if we’ve any hope of sustaining the gains and making it to some form of herd immunity via the vaccine.

As of this writing, 99.8 million people around the world have been diagnosed with COVID-19. The number will reach 100,000,000 today. The number has increased about 4.3 million from last week. That number reflects the decline in the pace of new cases, with 4.7 million new cases the previous week and 5.2 million the week before.

The peak day for the week was January 20, with just over 679,000 cases, well beneath recent single-day peaks. Four separate days the previous week reported higher numbers. Current daily numbers are not approaching the peak set on January 8, of almost 843,000 cases. Over the last seven days, new cases have averaged 588.5 thousand per day, down sharply from 674.9 thousand a week ago and 734 thousand-per day two weeks earlier.

The rate of deaths seemed set to level off this week but rose slightly. The previous single-day high, set the week before, was broken twice this past week, with the new single-day record for deaths coming January 20, with 17,490 deaths reported that day. Average global daily deaths reached 13,997, up about 300 per day over the same day a week earlier.

While we know the new U.K. variant is more contagious, the CDC is now investigating claims that it may be more deadly. Data is very preliminary. The British strain is expected to be the dominant strain the U.S. by March, but indications are it can be stopped with our current vaccines, though some data is indicating that may not be so with a recently identified South African mutation. It should be noted that, often, mutations make a virus less deadly and contagious.

Some of the global downturn in cases is due to strict lockdowns in some of the most impacted countries, such as the U.K., where three weeks into a lockdown, the countries numbers are dropping, though not as quickly as some had hoped. Mexican President Andrés Manuel López Obrador has tested positive for COVID-19. France is considering a third national lockdown, while Austria is mandating industrial grade masks for citizens in shops, public transit and businesses. The measure has reportedly been accepted by Austrians without much reaction.

The United States has reported just over 25.7 million cases of COVID-19, including about 1.2 million new cases in the last week. The weekly pace has been steadily declining, with 1.6 million the week before and 1.8 million two weeks earlier. Just over 15.4 million Americans are considered recovered, while almost 9.9 million have active cases of the virus, up about 300,000 over the previous week. Close to 430,000 Americans have died of the virus, up about 22,000 from last week.

Deaths in the U.S. are showing signs of a plateau at the least, and perhaps the beginning of a decline. The 1,851 reported yesterday brings the seven-day average to 3,183, up slightly from a few days earlier, but down from 3,416 last week and 3,306 the week before.

Five states reported more than 100 deaths yesterday. The states remain largely the same as last week, except for North Carolina replacing South Carolina at the top. Last week the two states swapped places, as well. The states leading in COVID-19 deaths for the day were California (298), Texas (222), New York (176), Florida (126), and North Carolina (109).

In pandemic totals, the same five states remain atop the list for most cases per capita: North Dakota, South Dakota, Utah, Tennessee and Rhode Island. Mississippi has now replaced South Dakota in the states with the most COVID-19 deaths per capita. The five worst states in death rate are now New Jersey, New York, Massachusetts, Rhode Island and Mississippi. Tennessee dropped from 19th to 20th in per capita deaths, marking the second consecutive week it has dropped a spot in that comparison.

President Biden is implementing travel bans on countries with high rates of transmission and, particularly, with wide-spread presences of new mutations. Countries include most European countries, South Africa, and Brazil. Former President Trump had lifted bans on Brazil and European countries two days before leaving office. The ban applies to non-U.S. citizens.

Republicans are signaling they may not support the proposed $1.9 trillion dollar COVID package proposed by the white house, with some of them attributing the opposition to Biden’s lack of outreach to them on the bill. If sustained, their effort may force Biden to choose between the bi-partisan approach he has espoused and a party-line vote to get the relief out quickly.

Moderna is “tweaking” its vaccine to be more responsive to new strains of the virus. In addition to promising to deliver 100 million shots in the first 100 days of his administration, President Biden is saying the pandemic will be controlled enough to open most schools in that same time period.

Over the three days since the last article, Tennessee reported 4,064 new cases Friday, 4,029 Saturday, and 2,841 on Sunday. The daily average continues to fall and has now reached 3,342 per day over the last seven days, a drop of over 1,100 cases per day compared to the same day a week earlier which, in turn, was about 1,000 fewer than the week before. State totals have now reached 603,856 confirmed cases and 104,861 probable cases.

654,335 Tennesseans are considered to have recovered from the virus, while 45,523 have active cases, down over 20,000 from the same day a week earlier. While 59 additional COVID-positive Tennesseans were hospitalized yesterday, bringing the total to 16,481, the number hospitalized in the state continues to drop. 2,109 are currently hospitalized with the virus, 595 are in ICUs, and 364 are on ventilators, all far below the peaks set earlier this month. The number in the in the hospital has dropped about 22% in the last week alone.

Deaths reported since the last article include 93 on Friday, 42 on Saturday and 40 yesterday. Total deaths in the state have now reached 8,859. The average number of deaths has dropped to 66 per day over the last seven days. Though it rose slightly over the last few days, a week ago the average was 87 and two weeks ago on the same day it was 109.

Testing has stabilized in a lower range than prior to the holidays, with just under 26,000 tests reported yesterday, bringing the state total to almost 6.2 million. Positive test rates also continue to fall, with the state reporting a 9.78% for yesterday’s tests. Johns Hopkins University reports an average of 14.5% positive tests for the state, compared to a 17.5% rate a week earlier.

The state dashboard for vaccinations has been updated to 1/21/2021 and now reports 438,577 total vaccinations have been given in the state, including 21,211 the previous day and 104,104 for the previous seven days. 89,399 Tennesseans have received their second dose. The New York Times reports that 5.2% of Tennesseans have gotten at least one dose, which ranks Tennessee’s vaccination program as the 28th most effective in the 50 states. At our current rate, all Tennesseans would be vaccinated in the next 918 days or by July 28, 2023.

Since the last article, the Knox County Health Department has reported 160 new cases of COVID-19 on Saturday, 231 new cases on Sunday, and 142 new cases today. County totals are 36,374 confirmed cases and 5,341 probable cases. Of these, 38,354 cases are considered inactive, while 2,917 Knox County residents have an active case of the virus. Active case numbers are at their lowest since early December.

Hospitalizations continue to drop rapidly with 103 COVID-positive Knox County residents currently hospitalized, bringing the total to 1,100 since the beginning of the pandemic. The number hospitalized has been roughly cut in half in just three weeks.

The state is reporting a 15.2% positive test rate for the county over the last seven days, an improvement from 17.9% a week ago and almost 23% the week prior. The county continues to work through only the earliest phases of vaccination, including medical workers, first responders and those over 75 years old.

Metrics for student and teacher attendance, cafeteria staffing, and bus service remain green, while the custodial metric has shifted from yellow to red and the substitute metric remains red. Some schools have returned to in-person classes, while two were added to the virtual-only list. Schools currently offering virtual only learning include:

The University of Tennessee is reporting 65 active cases, including 55 students and 10 employees. 2,564 have recovered, while the university reported 8 new cases Saturday, 7 new cases Sunday and 9 new cases today.