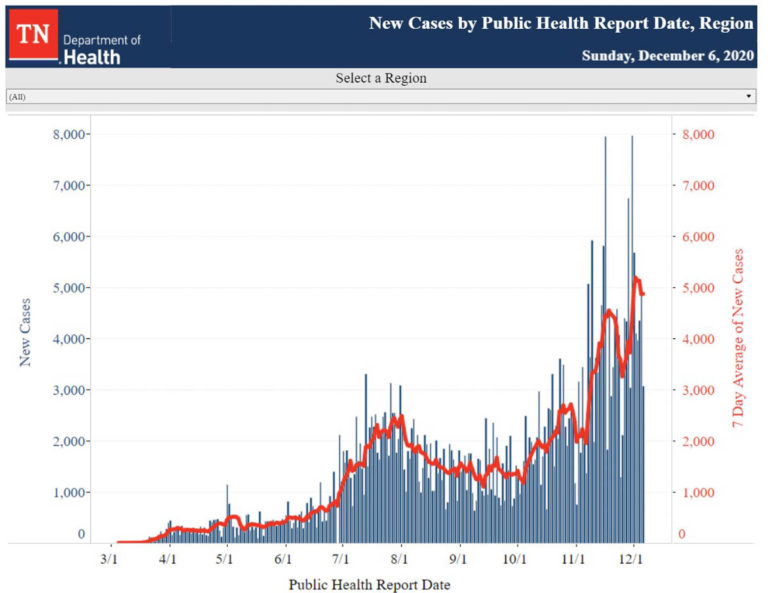 Welcome to another week as we edge closer to 2021 and, hopefully, a fresh start. Please keep your hope up, your guard up and dig deep from your well of kindness as we navigate a difficult winter.

The dip in case numbers last week was short-lived and likely a reflection of the drop in testing and reporting in the U.S. during the Thanksgiving holiday weekend. The previous single day high of 663,288, set on November 20, was exceeded twice this week, with a new high of 688,333 set last Thursday, December 3. The current seven-day average for cases is 610,356, a new record and roughly 28,000 more cases per day than a week ago.

Global deaths also continue to track upward and set new records. The previous record of 12,286 deaths in a single day, set the previous week, was exceeded twice this week, with the current record of 12,834 set December 3. The current average for international deaths each day is 10,809, up from 10,209 a week earlier.

Amid evidence of a slowing in European cases, most of the countries have instituted serious lockdowns of portions of their countries, including Sweden, which now limits gatherings to eight people, Austria, which has shuttered its entire hospitality industry until the new year and Italy, which has banned travel between regions, closed ski slopes until 2021 and imposed a national curfew. Here’s a good detailed run-down of some of the current restrictions across the various countries. It is a strikingly different approach to that taken by the U.S.

Australia, on the other hand is lifting a number of its restrictions, though, for perspective, their version of open up is more restrictive than many U.S. states have ever been, with 50 people now allowed at weddings, up to 5,000 allowed at outdoor events and churches allowed to host more worshipers. The state of Victoria which had an outbreak that led to many restrictions has now gone 38 days without a reported case.

Vaccines are, of course, the global obsession and the first vaccines will likely be given in the U.K. tomorrow. The first doses are scheduled to be administered to nursing home staffs and people over the age of 80.

Almost 15.2 million Americans have been diagnosed with COVID-19 since the beginning of the pandemic, up about 1.4 million from a week earlier, reflecting an increase in pace over the previous week in which the U.S. added 1.2 million cases. Almost 8.9 million cases are considered inactive and just over 6 million cases are active, up about 600,000 from that number a week earlier. Just over 289,000 Americans have died of the illness, a number that includes about 16,000 deaths in the last week.

The United States is averaging 2,260 COVID-19 deaths per day, a new pandemic record, surpassing the previous high average of 2,259 set on April 21. The average is up from 1,481 a week ago, though that total was likely depressed by reporting over the holiday. The previous week, the average was 1,548. Reported deaths continue to cycle with yesterday’s list of leading states only having two states in common with the same day the previous week: Illinois (99), Florida (93), Texas (70), Minnesota (64), and California (55).

In a silver lining of the pandemic, a surge has been reported in medical school applications and is being dubbed the “Fauci effect.” Rudy Giuliani has tested positive for COVID-19 and is hospitalized. The timing is very unfortunate, as the president’s lawyer has traveled to numerous states, met with hundreds of people including elected officials, and has done so often unmasked for the last week. As a result of his recent visit, the entire Arizona state legislature has been shut down.

While the various vaccines are the current source of the most hope, there is also angst over how to fairly distribute the vaccines to various states and the people within each state. There is also news that the number of doses will be short of what had been anticipated. CNN surveyed various states about the numbers of doses they now understand they will receive and how those doses will be distributed.

Of the states they surveyed, West Virginia gave the most detail and it was discouraging. They expect to “receive 60,000 doses of the vaccine from Pfizer on December 15 and 26,000 from Moderna the week after. The state can order up to 16,000 new doses from Pfizer a week and up to approximately 5,000 from Moderna each week.” Each person must receive two does to be vaccinated and West Virginia will start by giving the vaccine to “healthcare workers, long-term care facility staff and residents, plus emergency response and first responders.

The problem, clear for this state, but likely similar for other states is that there are 100,000 people in this first category. At the rate of vaccine availability described above the final shots for this first group will arrive January 26. A week later the immunization will be in effect for the final group. At that time, just over 5.6% of the state’s population will have been vaccinated. This is going to be a long roll-out. We need to hope other companies begin distribution and/or manufacturing rates rise dramatically.

Hospitalizations continue the months-long trend upward, with nearly every day setting a new high. As of Saturday, the last day for which numbers are complete, 2,506 COVID-positive Tennesseans were in the hospital, a record. 653 of these are in ICUs and 335 are on ventilators. ICU beds are most stressed at 11% availability, but that is slightly better than the end of last week.

Testing, after a large, reported total of nearly 56,000 for a single day about a week ago, has trended sharply downward. After settling into the low 20,000s last week, yesterday the state reported only 15,466 tests. For the day, the state reported a positive test result rate of 16.49%. Johns Hopkins University is reporting a seven-day average of 16.9% for the state.

In Tennessee news, state leaders announced we should receive the first shipment of vaccines by December 18. State Representative Byrd was hospitalized with the virus. Governor Lee signed an order yesterday allowing the state National Guard to assist hospitals in any functions for which they are trained.

Since the last report, the Knox County Health Department reported 303 new cases on Saturday, 397 on Sunday and 196 today. The 397 cases reported on Saturday constitute a new high for the county. New case totals for the county include 20,728 confirmed cases and 1,189 probable cases. 19,272 cases are considered inactive, while 2,456 are reported as active. (If you see local headlines saying the number of active cases jumped dramatically, those articles were posted before the county caught an error.)

The recent increase in deaths continued through the weekend, with three deaths reported Saturday, two deaths reported Sunday and another today. The three deaths on Saturday were all among people over age 75. The two deaths on Sunday were both people between 64 and 75-years-old. Today’s reported death was a person between the ages of 45 and 64. COVID-19 deaths in the county now total 189.

The state reports a 20.4% positive test rate for Knox County.

In local news, citing COVID safety concerns and a desire to lead by example, Knox County Commission Chairman Larsen Jay announced over the weekend that Knox County Commission meetings will go virtual. He also recently toured UT Medical Center’s COVID ward and talked with hospital personnel before an emotional interview with WBIR. You can read his statement about the visit on his FB page.

The Knox County School system is reporting 215 active cases of COVID-19, including 139 students and 76 staff members. The number reflects a drop of two active cases from the previous report, which was the high for the school year.

1,081 students and staff have recovered, while 2,494 remain in quarantine or isolation. It seems likely the second number, which includes 2,170 students and 324 staff members, will drop this week as new CDC guidelines shortening quarantine are put into place.

All metrics for the school system are green, with the exceptions of custodial and substitute staffing, each of which remain red. Six schools are currently on virtual-only learning: