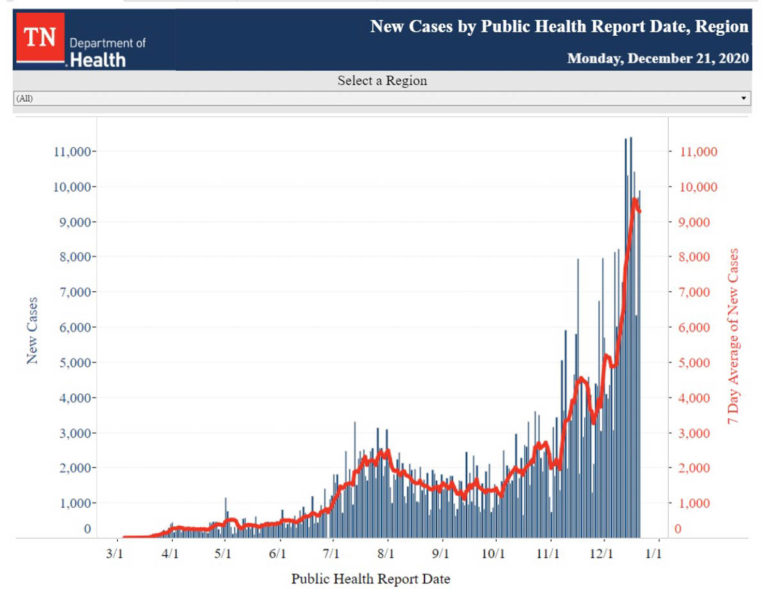 As we move through another week, the news continues hot and heavy on the COVID-19 front. Still, there are other things happening and a lot of them are exciting. I’ll keep covering those as much as possible going forward and here’s hoping that as next year moves along, the COVID-19 numbers are dropping as rapidly as they’ve risen and I’m writing about it less and less. That trend may not start for a couple of months or more.

In the meantime, get out and find some of the joy around us, look forward the good things to come and be thankful for the good things in our lives. If you missed it, I posted a look at some of the beautiful downtown Christmas windows earlier today and I’ll post another installment later this week. I also took time out to be interviewed by South of Scruffy‘s Ben Fields and you can give that a listen, if you like.

Yesterday, Tennessee reported 9,891 new cases of COVID-19, bringing the pandemic numbers to 474,343 confirmed cases and 55,235 probable cases. Of these, 438,036 are considered inactive and 85,406 Tennesseans currently have an active case of COVID-19. The number of active cases is a new state record and new records continue to be set each day. The state is averaging 9,280 new cases per day.

51 additional Tennesseans were admitted to the hospital yesterday, bringing the pandemic total to 13,796 who have been hospitalized at some point during the pandemic. The number of COVID-positive Tennesseans currently in the hospital has dropped slightly over the last two days, pausing a months-long trend of setting new highs each day.

The state reported 65 additional deaths from the virus yesterday, bringing the total to 6,136 over the last nine months. The state is now averaging 85 deaths each day.

There are currently 2,771 hospitalized with the illness and 758 of these are currently in ICUs, while 396 are on ventilators. While the total number has dropped slightly, both the ICU and ventilator numbers are new records for the state. Current availability for hospital beds is now 16%, while ICU bed availability sits at 9%. A new level of hospital reporting provided by the state shows that in east Tennessee (our 16 county area), about 25.5% of hospital beds currently in use are being used by COVID-positive patients. In ICU beds, the percentage is 43.7%.

There are currently 150 COVID-positive Knox County residents in the hospital, a new record. 712 have been hospitalized as a result of the illness at some point in the last nine months.

The Knox County Commission voted affirmatively last night to disband the Board of Health and immediately replace it (intended to be with the same members) with a design that prevents the Board from issuing mandates and makes them advisory only. It moves the responsibility back to Dr. Buchanan from whom the same group removed responsibility earlier in the pandemic. The measure must pass a second reading, scheduled for January.

Dr. Buchanan began the meeting by thanking everyone involved in vaccine distribution. She said 2200 doses of the Moderna vaccine this morning at the health department. She said it is an exciting and historic moment. She said those vaccines will be used for priority groups which they are charged with addressing, including their mass-testing team. She said they will follow CDC and state deadlines.

It will be “a while” before the vaccine is available in the wider community. She said news has been very encouraging and she warned against getting information from social media as there is much information to be found there.