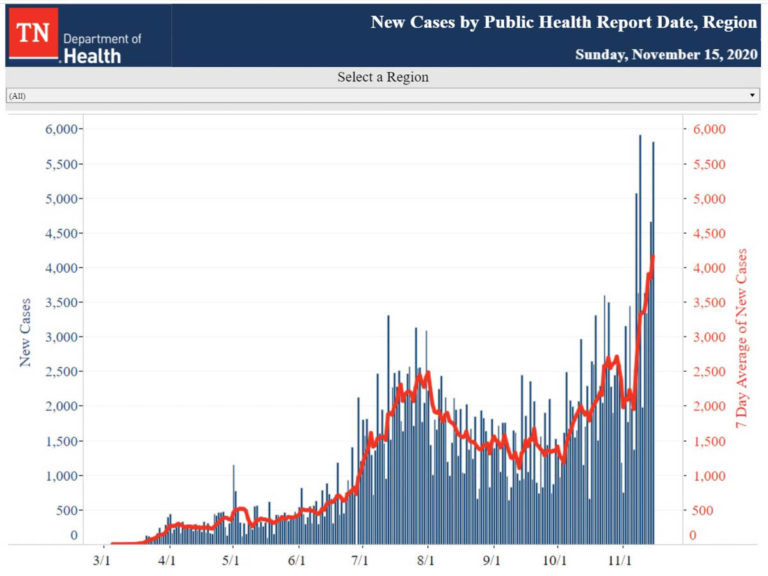 Welcome to another week. I hope you grabbed the chance to take a nice walk, enjoy our beautiful fall colors or watch the SpaceX launch. We enjoyed “Sandlot,” hot chocolate and a game of monopoly in which the young ones finally felt sorry for me and let me win. Oh, and we had a great leaf fight. Be kind to yourself and to others as we navigate our way through this difficult time.

Just over 54.8 million people across the world have been diagnosed with COVID-19, an increase of about 3.9 million from a week earlier. Of these, just over 38.1 million have recovered, over 1.3 million have died, and about 15.4 million remain ill. About 63,400 died over the course of the last week and the number of active cases is about 1.7 million higher.

51 countries exceeded 1,000 new cases yesterday, the same number as a week earlier. Twenty-two of the countries are European, seventeen are Asian, five are South American and three are African. Of the Asian countries, there is a broad spread, with groups of countries in the middle east, southeast Asia and other parts of Asia.

Last week’s best news was word on Monday morning that Pfizer has a vaccine almost ready that is showing a 90% effectiveness rate. This morning produced similarly good news as Moderna announced its vaccine has a 95% effectiveness rate. Not only is this a slightly higher effectiveness rate, but it is easier to distribute as it doesn’t need extreme low temperatures to be preserved. They hope to get the vaccine to medical workers in December and larger scale distribution to the public would likely come next spring. They anticipate providing a billion doses world-wide in 2021, which would vaccinate about 500 million people, or about 7% of the world’s population.

Elsewhere across the world, the story is renewed lockdowns and calls for lockdowns as the current levels of both cases and deaths dwarf the point at which lockdowns were instituted previously. In Germany, bars and restaurants are take-away only, though schools are open as the country considers locking down harder. France, which currently only allows citizens to leave home for specific reasons, such as work, but has schools open, is struggling with public disregard of the restrictions. Pubs, restaurants, gyms and non-essential shops are closed in the UK.

Approximately 11.4 million Americans have been diagnosed with COVID-19, an increase of over 1 million cases in one week. Just over 6.9 million cases are now inactive, while almost 4.2 million people have active cases, up almost a half million over the same day a week earlier. Over a quarter of a million people have died in the United states because of the virus, with the number at 251,945 as of this writing. About 8,100 died over the last week.

The United States, as it has for months, continues to have far more new cases than other countries, currently running about as many new cases per day as the next four countries below it added together. The seven-day average for new cases in the United States is 152,136, up from 111,226 a week ago. Prior to this past week, the single-day record was 132,840 cases set on November 6. The week that just ended saw the U.S. break that number six out of seven days, setting new records three times, with the current record now at 187,907 set on Friday, November 13. As a comparison, the U.S. locked down last spring when averaging roughly 34,000 new cases per day.

In real numbers, the U.S. has more cases (11.4 million to second place India’s 8.9 million) and deaths (252,000 to second place Brazil’s 166,000) than any other country in the world. The U.S. now ranks 7th globally in per capita cases among those with more than 1,000,000 in population, surpassing Panama this past week. The U.S. dropped to ninth in per capita deaths after being passed by Mexico. The U.S. has regained first in total tests with over 168 million and ranks sixth per capita in testing among more populous countries, up from 7th last week.

Deaths, which were slower to rise than cases, continue to increase. The U.S. is now averaging 1,156 deaths per day, up from 979 a week ago. It is the highest seven-day average reported since August 5, but still roughly half the peak from mid-April. Only two states reporting the most deaths yesterday were the same as last week. This week’s top five death totals by state from yesterday were Texas (76), Illinois (74), North Carolina (50), Massachusetts (36) and Pennsylvania (32).

In his first public remarks since the election, on Saturday President Trump addressed the coronavirus situation, touting his administration’s accomplishments. Speaking of a vaccine which will be widely available next year, he said it will be free to Americans and that he will not institute a nation-wide shut down. He said the U.S. government has provided $1.95 billion to Pfizer for development of the drug. Pfizer said they have received no funding from the U.S. government.

He further said the vaccine will be available to the entire country by April, a timeline not supported by most observers. He said the exception would be New York state because they have expressed distrust in the vaccine. Amidst calls for cooperation between the current and in-coming administrations on combatting the virus, Dr. Fauci said President Trump hasn’t attended a White House Task Force meeting in months.

As more states are imposing mask mandates and other restrictions, Michigan got particular attention this weekend as it closed bars and restaurants to in-door dining, encouraged people to work from home and closed other businesses. Dr. Atlas, the current apparent head of the White House Task Force responded that, “The only way this stops is if people rise up. You get what you accept.” Michigan’s governor was the victim of a plot in October to kidnap or kill her over her restrictions.

The surge of coronavirus cases continues in Tennessee. The single-day pandemic record of 5,919 cases set last Monday was nearly matched over the weekend. Reported cases for the three days since the last report were 3,733 on Friday, 4,662 on Saturday and 5,817 on Sunday. The seven-day average, just over 2,900 a week ago, is now 4,155 per day.

The state reported daily death totals over the weekend of 64 on Friday, 25 on Saturday and 16 on Sunday. Friday’s number of fatalities from the illness ranks as the fifth highest daily total of the pandemic. All five of the top daily totals have happened in the last four weeks. The state is now averaging 43 deaths per day from COVID-19 and the total deaths have reached 3,893.

An additional 25 people were hospitalized with the illness yesterday, bringing the total hospitalized since the beginning of the pandemic to 11,141. Tennessee hospitalizations reflect the national trends of records or near records, with 1,787 COVID-positive Tennesseans currently hospitalized, 491 in ICUs, and 219 on ventilators. A month ago, those numbers were 1,182, 355 and 167. Each of the numbers are up slightly from Friday except for those on ventilators, which dropped by six. Capacity state-wide (with possible local exceptions) appears adequate at this time.

Just over 45,000 tests were reported yesterday, with a 12.37% positive test result rate. As a reminder, the goal is for that number to be below 3%, which indicates those needing testing are largely getting it. The state has given a total of almost 4.1 million tests and currently ranks 13th in per capita testing among the states. According to Johns Hopkins University, Tennessee’s average positive test rate is now 12.8% and continuing to rise.

On Saturday, the Knox County Health Department reported 125 new cases in the county. On Sunday, the county set a record with 253 new cases for the day. That record was broken today with 324 new cases. It’s the first time our record daily cases have been broken on two consecutive days. The 702 cases this weekend approaches the pandemic total for the first four months of the pandemic (912).

The new numbers bring the pandemic totals in the county to 15,663 confirmed cases and 860 probable cases. 14,441 are considered inactive and the active total has reached 1,951. This represents the highest total of active cases since the formula was revised at the beginning of October.

84 COVID-positive Knox County residents are now hospitalized, the most at any single point since the beginning of the pandemic. The total hospitalized at some point is now 530.

No deaths were reported on Saturday, with 2 Sunday and another today. Of the three, two people were over 75 years old and one was between 64 and 75. Twenty-six people have died of the illness in the county in the first 16 days of the month.

According to the state website, Knox County now has a seven-day average 13% positive test result rate, up from 11.6% as of Friday.

The University of Tennessee is reporting 76 active cases, down from 97 on Friday. 1,911 students and staff have had the virus and are now considered to be inactive. For the last three days, the university has confirmed 34 new cases. Isolation and quarantine numbers are down, as well, with 390 total, including 67 staff members and 323 students. No additional clusters have been reported.

The Knox County School System is reporting a higher number of active cases (this number is from Friday afternoon), at 97, up from 88 the previous day. The number includes 67 students and 30 staff members. It breaks the previous day’s record for the highest single-day total since the beginning of the academic year.

658 students and staff are reported to have recovered, while 1,534 are in quarantine or isolation. That number is also near a record for the academic year (1,589 set on November 9), and includes 168 staff and 1,366 students. Custodial and Substitute metrics remain red, while teacher attendance has returned to yellow from green.