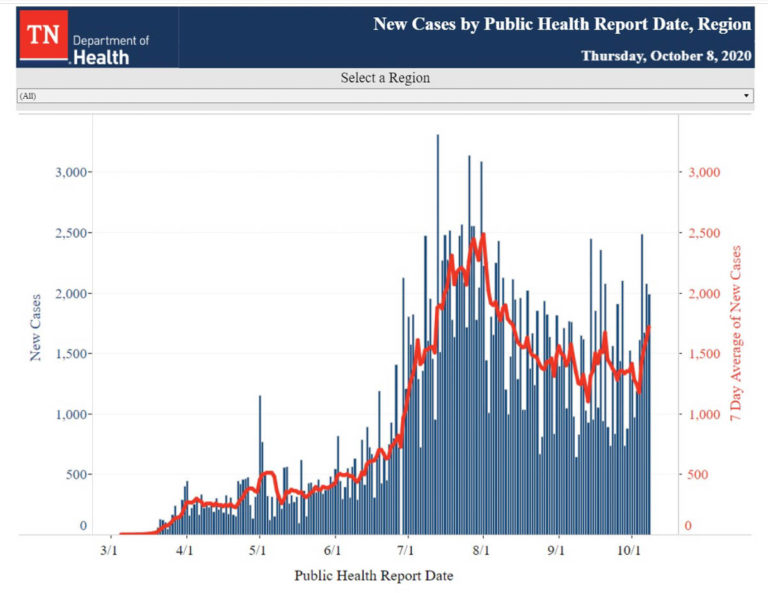 It’s Friday and we’ve got a soggy weekend ahead, followed by Fall Break for all the public school students in the county. I know the two in my house are abuzz with excitement. Nine months ago we were planning to take them to San Francisco for their break. It’s another of the many losses we’ve all experienced. To give them some attention, I’m going to ease up on publication next week. As of now, my plan is to post the mid-day update and skip the morning articles for the week. We’ll see how it goes. I hope you have a great weekend and all the families with school children have a safe and happy week.

Yesterday, the state of Tennessee reported 1,992 new cases of COVID-19. Pandemic totals now include 200,013 confirmed cases and 9,344 probable cases. 189,990 people have recovered and 7,408 people remain ill. The state had the 7th highest total of new cases for the day and the current seven-day average is 1,717 per day, the highest it has been since August 13.

Reported deaths surged yesterday to 63 for the highest number of deaths in a single day since the beginning of the pandemic. The total dead is now 2,705 in the state. The current seven-day average for deaths is 29 per day.

The state reported just over 27,000 tests yesterday to bring the total tests given to about 3,081,000. The state reported a 6.88% positive test result rate for the day. Johns Hopkins University is reporting a 6.4% seven-day average.

Hospitalizations continue to be a source of concern, as each of the last five days have set or tied a record from the highest number of COVID-positive Knox County residents. Today the number was reported as 54, a new record and up 3 from yesterday. The increased hospitalizations have not yet produced a surge in deaths. One additional death was reported today, bringing the pandemic total to 86 deaths attributed to COVID-19 in Knox County since the beginning of the pandemic.

The number of confirmed active cases at the University of Tennessee plummeted, then shifted to a slow decline for the the past two weeks. The university is currently reporting 61 active cases, including 59 students and 2 staff members. New daily cases, which have been under twenty per day for the last two weeks, were reported at 9. A week earlier, the same day, the university reported 90 active cases.

As a result of the above, isolations and quarantines have plummeted and then slowed to a steady decline. There are currently 268 in quarantine or isolation, including 29 employees and 239 students. This number is down from 319 a week ago. There have been no additional clusters.

Dr. Plowman began by urging everyone get a flu shot and reminded students and staff that it is required. She thanked everyone who enjoyed last weekend’s football game responsibly. She reviewed today’s data.

Dr. Gregg said, as he has before, that it is great to see the decline in cases, but he fells the number will increase with more comprehensive testing. He reminded students that while numbers are down on campus, hospitalizations are up in Knox County and that they may spread it to more vulnerable symptoms. Testing, he said, is steady, but they are still seeing students who test positive off-campus, not reporting as they are required to do so.

Dr. Plowman said three additional dorms were pool tested this week. She reminded students that they signed a contract to submit to the testing protocol. She said failure to participate in saliva testing or follow-up testing will result in punishment. Dr. Gregg said of the dorms they have tested, they have had 76%, 51%, 41% and 63% compliance rates. Testing yesterday at Fraternity Park resulted in a 59% compliance rate.  Dr.Gregg emphasized that unless there is comprehensive data, it will be hard to draw accurate conclusions regarding the situation. 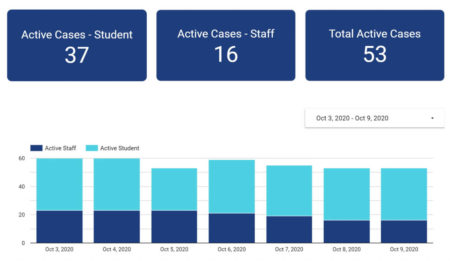 The Knox County School system is reporting 53 active cases, including 37 students and 16 staff. Unlike previous weeks, the number has declined through the week. The current number reflects a drop of 2 from yesterday and, most significantly, a drop of 12, or about 19% from last week. 346 are reported to have recovered.

There are currently 934 in isolation or quarantine, including 841 students and 93 staff. This also reflects a significant drop from a week ago, when the total was 1,064. All metrics remain green with the exception of custodial staff and substitutes which remain red. No additional school closings have been announced, with Austin East set to return to in-person instruction after the break.