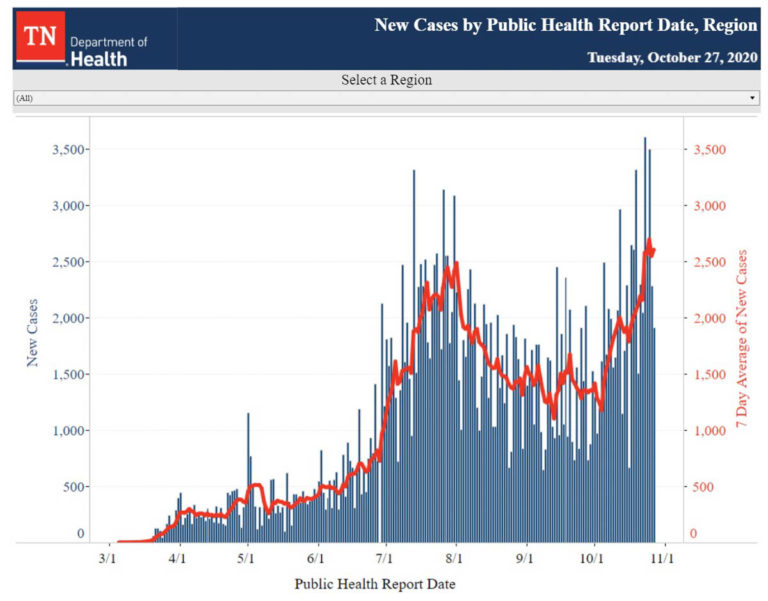 Halfway through the week and under a week until election day. How are you doing? Are you finding some joy along the way? I’m enjoying the fall color, which is shaping up to be beautiful in East Tennessee. Even the rain for the next couple of days feels kind of cozy. Cooler temps are on the way, the hum of football on the television on Saturdays feels normal, even if the schedule has been a bit rearranged.

Even reading to the kids is a nightly comfort, as we’ve just finished our fourth book together (Hatchet) and are starting the fifth. They seem to favor survival stories, for now. Don’t we all?

The state also reported 44 additional deaths for the day, bringing the pandemic total to 3,207. After hovering in the range of twenty to thirty per day for about ten weeks, the number has quickly escalated, setting a pandemic high for the average two days ago and breaking it yesterday. The new average number of daily deaths in Tennessee is 36. Yesterday’s number was the 8th highest in the U.S. for the day.

77 additional COVID-positive Tennesseans were admitted to hospitals yesterday, bringing the total to 10,062 who have been hospitalized at some point. Hospital data has become murky. Clearly, the numbers are increasing, yet several of the last few days, a decrease is reported, only to be revised upward 24 hours later as more hospitals report. Yesterday I reported 1,223 hospitalized, 368 in the ICU and 159 on ventilators. State numbers for that day now read 1371, 389, 170, which tells quite a different story.

Interestingly, the state never revises the numbers on its front interface. Starting tomorrow, I’m going to report the numbers from two days previous, as they will be more accurate. Using the revised number for yesterday, the number of COVID-positive Tennesseans in the hospital has increased 73% in the last six weeks. Today’s numbers reflect a decrease from yesterday but, I assume, will be subject to upward revision. As stated above, I will report them tomorrow.

Reported testing numbers, as you would guess from the decreased case numbers, declined sharply yesterday to about 16,500 from 22,700 the day before and 41,600 two days previous. The total for the pandemic is almost 3.6 million. The state reported the positive test rate for this group at 11.43%. The seven-day average, as compiled by Johns Hopkins University, remained at 9.6% for the second day, the highest it has been since April.

The Knox County Health Department is reporting 105 new cases for the day, the fifth consecutive day over 100. It’s the first time the county has reported 100 or more cases on five consecutive days since early September. The new cases bring the pandemic totals to 12,828 confirmed cases and 626 probable cases.

Each of the newly reported deaths were people over the age of 75. For the first time in many months, perhaps since the beginning of the pandemic, over half of the deaths reported are among those who are over 75 years old. The split is now 52 people 75 or older and 51 people below the age of 75.

The state website reports the Knox County seven-day average for positive test results to be 8.9%, up from yesterday’s 8.5%.

The Board of Health meets this afternoon at 5pm and if you’d like to watch it live, it is available on the Knox County Youtube channel or on CTV or the CTV website. Of course, I plan to bring you a run down of the meeting tomorrow.

The University of Tennessee is reporting 60 active cases among students and staff, a drop of three from yesterday. There have been seven additional confirmed cases of COVID-19. The number of students and staff in isolation or quarantine continues to ebb and flow at a relatively low level. There are currently 304 in isolation or quarantine, including 37 employees and 267 students. The number is up slightly from yesterday and is at its highest in the last five days.

There have been no additional clusters.

The Knox County Schools are reporting 72 active cases, up from 64 the previous day, but consistent with recent levels. The number includes 27 staff members and 45 students. 500 students and staff have recovered from the illness

The number of staff and students showed a sharp increase from the previous day, with 909 in quarantine or isolation. The number includes 115 staff and 794 students. It’s the highest the number has been since October 8. Both cases and isolations have shown a jump after fall break, as compared to before the break.

All metrics remain green with the exception of custodial availability (yellow) and substitute availability (red). All schools remain open to in-person learning.