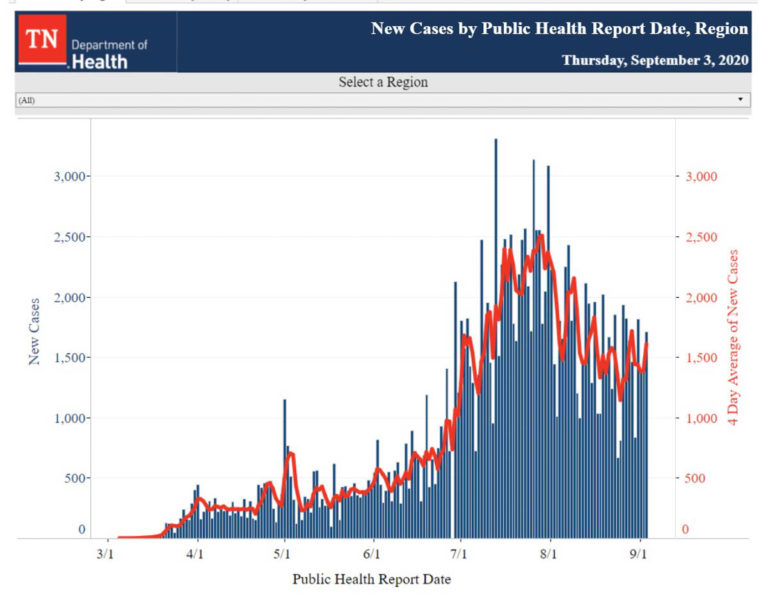 Congratulations: You’ve made it to Labor Day. We can make an argument that fall has arrived, after Monday, and that hot temperatures will soon be easing, leaves turning, and actual (albeit sparsely attended and socially distanced) college football will be on television. Fire up the grill, turn on the tube and act like the world isn’t standing on its head for a few hours!

As you make your plans, if you intend to gather with others, please do so carefully. The virus doesn’t care if we’re on holiday and Knoxville has seen spikes after several previous holidays. Watch your sports, enjoy some barbecue and celebrate those who labor in this country, and remember those who would like to be a part of the labor workforce, but have temporarily lost their place.

Some of the information has been moved to the dashboard, but entries there appear, at this time, to be a day or two behind the rest of the site. County level information is available here, and I’ll use some of that in our county report, though their case numbers, etc. don’t always align perfectly with what our Health Department reports. I’ll report what I can find. If you notice differences in how I report, this is likely why.

Yesterday afternoon, the state of Tennessee reported 1,715 new cases and 18 additional deaths, to bring those totals to 159,546 and 1,815 respectively. There are 897 COVID-positive Tennessee residents currently hospitalized, with 83 added overnight, but a net decrease of 15 from yesterday. The number of total hospitalizations continues a slow recent decline.

The four-day moving averages of cases is now at 1,608 and remains dependent on the level of testing completed in the state. The number of cases is about the same as mid-August. I would expect testing and, as a result, cases to dip over the next week due to the holidays. The state reported results for almost 27,000 tests yesterday, a number in line with testing efforts during the summer. Total tests given is now closer to 2.3 million. They’ve removed the state-wide positive test numbers (as far as I’ve been able to find), but Johns Hopkins pegs us at 7.6%, a slight improvement over yesterday.

The Knox County Health Department is reporting 134 new cases and no additional deaths, leaving those total pandemic numbers at 7,028 cases and 62 deaths. 4,814 people have recovered and 2,407 remain ill. There are currently 41 COVID-positive Knox County residents in the hospital and 274 have been hospitalized at some point. There are also 255 probable cases.

The encouraging news is that the number of hospitalizations have fallen over the last few days after a recent steady rise, now at about the same level as a week ago. The concern is that cases numbers are clearly rising, perhaps fueled by UT cases. Today marks the third consecutive day of over 100 new cases, which hasn’t happened since July 30 – August 1.

As mentioned above, there is a county section of the state website. The daily case numbers and other data varies slightly and I have more faith in the local numbers. That said, they are very close and there are a couple of pieces of information not included on the Knox County Health Department site which are included on the state portal. Included there is a seven-day average for the county, which now sits at 107 new cases each day after dropping as low as 75 on August 26. They also report that, over the last seven days, Knox County has averaged just over 1,000 tests per day, with an average 9.6% positive test result rate.

The Knox County Schools are reporting 45 active cases, including 28 students and 17 staff. This reflects a slight improvement from yesterday’s total of 48 and reflects reductions (due to recoveries) in both student and staff numbers. A total of 93 have now recovered, meaning five new cases were added to the list overnight.

There are currently 587 in isolation/quarantine, including 504 students and 83 staff. This number continues to grow, up by 15.8% overnight. An important note here is the proportion of students in isolation is growing, with the entire overnight increase among students, moving that number from 423 yesterday, to 504 today.

For students, that represents an overnight growth rate of 19.1%. The concern, as I’ve said before, is the rate of increase. 500 students is just over 1% of the approximately 40,000 students attending in-person classes in the county – relatively small. At this rate of increase, however, the number would double every four days. That would mean about 1,000 students in quarantine by early next week and 2,000 by the end of the week, etc. The rate of increase is what must be slowed for schools to remain viable.

The Knox County Schools has now added a metrics page which clearly defines what would move one of its metrics to a new color. For example, an attendance rate of below 90% would send the teacher or student attendance benchmarks to red level. It’s helpful in order to understand what the various colors mean. The “red” levels are mostly levels at which school closures have happened in the past, due to illness. As of now, the colors remain the same for each of the metrics: Green for all, except yellow for custodial staff and red for substitutes.

University of Tennessee News and Briefing:

The University of Tennessee is reporting 369 active cases, up from 308 yesterday, for a 19.8% overnight increase. At this rate, active cases would double every four days. Only six employees are counted among those numbers. 1,647 students and staff are in quarantine or isolation, up from 1,442 yesterday, representing a 14.2% increase overnight. The number, continuing at that pace, would double every 5 days.

There has been a shift in student isolation patterns, with increasing numbers of students isolating on campus and almost matching the number isolating off campus. The current breakdown is 827 off campus and 754 on campus. The increase on campus presents increasing logistical issues for staff. About half the isolations are due to contacts and about half have either been diagnosed or have developed symptoms.

Chancellor Plowman reviewed the data for UT, noting the sharp increases. She said the only good news on the UT numbers is the continued flat numbers. Dr. Gregg said the contact tracers are learning that group gatherings continue to drive the numbers, either for those who attended or those they came into contact with later. Some have been from small gatherings where appropriate care wasn’t taken.

Clusters have been added and continue to be centered in sorority houses. She said the rising numbers will begin straining resources. A new hotel is being added – the entire hotel – which will be used for quarantined or isolating students. Staff is being added and reassigned to the effort for tracing, data and food delivery. A plan is being developed to isolate students within their houses. Dorms may have vacant spaces consolidated to use for quarantine, which may require some students to move. She said everyone must remain flexible.

Dr. Zomchick noted that faculty is also going to need to be flexible with more generous policies on work. He said students are more stressed, may be ill or have ill family members, may be asked to move more than once during the semester. Dr. Plowman pointed out that she is teaching a class and a student is in quarantine, so she must make sure the camera and software is working so he can continue to participate.

Dr. Gregg who directs the campus response said the biggest challenge in recent days has been the rapid increase in cases. Contact tracing is a challenge as they attempt to contact everyone. They are attempting to move students as rapidly as possible. A big problem is students who are testing positive off campus and not completing isolation forms.

He said the volume of calls from parents and others has also presented a challenge. Some students have told parents about a positive test, but not filled out the proper forms with the University. Parents then wonder why the university isn’t helping them. They encouraged students to get tested on campus at the Student Health Center, which expedites the process.

Dr. Plowman said the university is at an inflection point. She thanked the students who are working to stay well and pleaded with the others to do the right thing and avoiding situations where they might be exposed. She reiterated that testing done on campus is returned more quickly, and students can get the help they need. She also reminded students that they should quarantine while they wait on test results.

Dr. Gregg said the issue with the sorority houses is that they are small and have communal living in close quarters. He said the bathrooms are commonly used and are smaller. Dorms are different because they are larger and people occupy a small space with fewer others. Residence halls are less like a house and more like an apartment building.