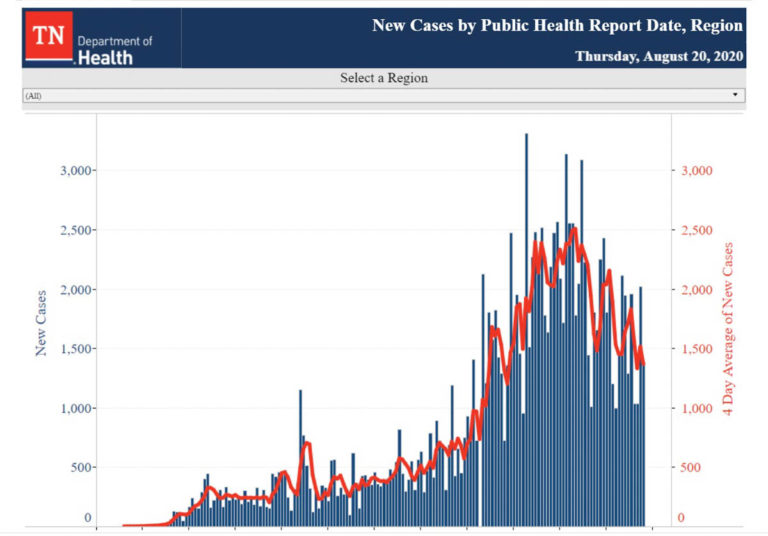 Welcome to the weekend! We’ve made it through another week of updates and we’re ending the week with all numbers; international, national, state and local looking promising. Celebrate (but keep up the work)! I think we may be head for a Karate Kid kind of weekend with a final moment of “summer” before the school year starts on Monday. The week has been spent gearing up for the digital challenges of next week. I’m thankful that we have this option that so many do not have.

While the numbers in all the categories we’ll discuss remain very large, there is encouragement at every level. Reported worldwide daily cases have continued to decline slowly after peaking a week ago at almost 264,000 new cases per day. Yesterday’s number of new cases is about 5,000 lower than yesterday but, most importantly, it is about 20,000 lower than the same day last week. The seven-day average fell by about 2,700 overnight to 251,719.

Deaths also continue to decline, though more slowly. With the rapid decline in cases, it seems reasonable to expect that the drop in deaths might escalate, as well. The 6,182 deaths yesterday was about 500 fewer than the day before and almost 400 from the same day the previous week. After a recent peak of almost 5,900 deaths per day, the average for the last seven days is now 5,634. The same four countries remained at the top of the list for deaths, though re-shuffled slightly: Brazil (1,234), the U.S. (1,090), India (981), and Mexico (707).

The countries driving most of the worlds new cases also remained the same, albeit shuffled slightly: India (68,507), the U.S. (45,341), Brazil (44,684) and Colombia (11,541). Twenty-nine countries reported at least 1,000 new cases for the day. Ten of those countries are in the Americas. France, in reporting almost 4,800 new cases has once more moved into the top ten in the world in daily cases and the most recent total is higher than any day since April 14. Its daily average is now roughly the same as mid-to-late April.

After crushing its horrific curve, Spain now has the fastest growing case load in Europe. This article looks at what happened post-lockdown. With a new case rate running in the low double-digits, Hong Kong has announced a massive testing program to start in September. European countries are reversing course with travel and closing the doors, once more. The WHO hopes the coronavirus pandemic can be over within two years.

Just as is the case internationally, there is good news in the numbers and, in fact, the two are related as the U.S. is responsible for much of the improvement in global numbers. The 45,341 new cases yesterday represents a drop of about 9,400 cases from the same day the previous week, accounting for almost half the global drop. The seven-day moving average for the U.S. is now 46,589, well off its July 25 peak of over 69,000.

As with international numbers, deaths are also falling in the U.S., but at a slower pace than new cases. The assumption would be that a sharp reduction in deaths could come soon. The 1,090 deaths reported yesterday is 194 fewer than the same day the previous week. The seven-day average is now 1,001, down from 1,080 a week earlier. Three states reported more than 100 deaths yesterday: Texas (204), California (135), and Florida (118).

No Mets and Yankees this weekend as professional sports continues to struggle through the pandemic. Meanwhile, the SEC is struggling mightily to ensure league schools the chance to play. Meanwhile colleges and universities are facing impossible dilemmas as they decide next steps.

Following international and national trends, Tennessee’s number of new daily cases is also declining. A total of 139,175 cases have been reported since the beginning of the pandemic and 1,375 were reported yesterday. The seven-day moving average (from worldometers.com) peaked at 2,484 on August 1 and has declined since, now sitting at 1,524 per day.

1,488 Tennesseans have died of the illness and an additional 36 deaths were reported yesterday. In this statistic, Tennessee’s pattern does not parallel the world and country, as the number of deaths has continued to rise. The seven-day moving averages of deaths is now 25 per day, the highest it has been at any point. Assuming the reduction in cases found is a true reflection of a reduction of the spread of the virus, we might expect deaths to also soon trend downward.

An additional 1,882 people were reported to have recovered yesterday, bringing that total to over 100,000 at 100,967. The number of active cases is now 36,720. This puts the number of active cases about 1,300 fewer than a week ago. 87 additional people were hospitalized across the state yesterday, to bring the pandemic total to 6,156. The number currently hospitalized continues to track downward after peaking at nearly 1,200 on July 29. There are currently 965 hospitalized and that number should also continue to decline if the decline in cases numbers is truly reflective of our situation.

Locally, the Knox County Health Department is reporting an additional forty-six cases to bring the total to 5,701. Almost matching the recent low set two days earlier, the trend is clearly down for new cases in the county. For the second consecutive day, there were also no new deaths, leaving that total at 52 and continuing a slowing trend there.

UT Chancellor Plowman gave her second update of the week today and reported there are now 110 positive cases at UT, with 103 students testing positive and 7 employees. Employee cases are very flat, but student infections continue to rise. There are 408 students and staff currently isolating and many are doing so off campus. Of UT’s 30,000 students, only 6,500 live in on-campus housing.

Students were implored to behave responsibly and to cooperate with contact tracing efforts, including taking the calls (they also get emails). They emphasized they have the capacity to go all digital if needed, but that decision would be based on a wide range of variables from area hospital status to community spread, positivity rates and more.

Dr. Plowman emphasized that students who jeopardize the health of the community by hosting large gatherings will be held accountable. She also expressed confidence that students could rise to the task, referencing her father, who joined the army to fight in World War II at their age, as an example of how their age-group can rise to meet a moment. She acknowledged this is not the experience students had hoped for for the fall, but encouraged everyone to make small sacrifices to keep everyone as safe as possible.