Dr. Gotcher chaired the meeting and he and Dr. Buchanan joined remotely as they had been requested to testify before the Joint Government Operations Committee’in Nashville. The mask mandate was not on the agenda because the committee had decided to only address it if there was a need. The meeting began with Mayor Jacobs requesting that the mask mandate be added formally under other business and it was added.

The benchmarks were presented as updated on the website today and numbers were reported as noted in the earlier article. The first benchmark regarding new cases was moved to green as there had been no three consecutive days of statistically significant increases. Testing was left green as turnaround time is dropping. Public Health capability was kept green as they said virtually all new cases were contacted within 24 hours and contacts within 48. Health Care capability remained yellow out of caution. Benchmark 5, for deaths, was changed to green as there was a decline in deaths over the last seven days from 11 the previous week, to 6 this week.

The CDC’s recommendation that contacts not be tested was raised by Dr. Shamiyeh, who said it confused him. Charity Menefee and Dr. Buchanan said they continue to offer tests to contacts, though it is their choice as to whether or not to be tested. Dr. Buchanan implied it seemed odd to her, as well, but speculated it may be due to supply chain issues.

Dr. Shamiyeh presented hospital data and case data and provided all the charts found here. Of note in his presentation, Hamilton County, which had been on a downward trajectory has moved back up as school has come into session. He said there had been no deaths at UT hospital since his last report. He noted that new cases were slowing down and so the pace of adding each thousand, both in Knox County and surrounding areas. Hospitalizations have declined and with it the number of COVID-19 positive patients on the census. He noted, once again, that the dramatic local downturn followed the mask mandate and that the resulting projection is much better than it was previously.

Regarding the mask mandate, Mayor Jacobs said he gets a lot of questions about what data the mask mandate is based on and, particularly, when it can end. Dr. Buchanan said where we are as a community, with UT and public schools are opening, it may not be a good time to make a change. She said she is not aware of communities setting a data point for dropping the requirement.

Dr. Gotcher brought up positivity rate, noting it had been discussed before. He mentioned the benchmarks as a possibility. Dr. Buchanan said she would try to get information from other places with mask mandates, though there are not many across the state. She said looking around the country might be possible, though looking at one data point might be a mistake. She noted that Memorial Day and 4th of July brought increases two weeks afterward and said we don’t want to remove the mandate and realize we moved too early.

Dr. Shamiyeh mentioned the advent of flu season is also a variable. He also noted that people need consistency. He said the masks are the only reason he can see for a turnaround and he fears a yo-yo situation if we drop requirements and the uncertainty it would produce. Mayor Jacobs said the drop in cases could just be a naturally occuring bell-shaped curve and not a result of the mask mandate.

Dr. Hurt said that nationally and internationally when restrictions have been lifted, illness has increased. She said there isn’t absolute correlation, but anecdotally, the charts look compelling. She said she knows people are tired, but feels the community has to hold the line and that waiting is the prudent thing. Dr. Buchanan said complaints have gone down.

Dr. Shamiyeh brought up for discussion that communal living is challenging in the face of COVID-19 and mentioned dorms. He noted that other colleges have spiked very quickly. He said we don’t get do-overs if we mess up. He said he feels UT has a good plan, but a super-spreader event combined with communal living could result in a spike.

He said UT could have trends in a different directions than the rest of the county and that creates a data challenge. He noted this is not really a campus town and suggested that what is best for campus may not be best for the county and vise versa. He noted that the students make a big impact, however, on the community and that if UT goes to all virtual instruction, it will hurt the local economy. He feels we are all in it together and said it is worth considering that the Board may need to take action to help them.

Mayor Jacobs said the county and city, as well as the Health Department works closely with UT and Dr. Buchanan and Charity Menefee said they speak multiple times a day. They said communication about new cases is quick and the initial interview goes through the Health Department, but contact tracing is handled by the University.

Dr. Shamiyeh said he is hearing concerns that restaurants are functioning as bars to serve the students after ten. He said, perhaps a 50 person maximum gathering might be fine for the county’s general population, but it might not be the best for campus. He mentioned perhaps asking Dr. Plowman if she needs anything from the Board. Dr. O’Brien made the point that the Board cannot make decisions for UT.

It was noted that the board received a letter was received from a group of UT faculty, but the contents of the letter were not stated. Dr. Shamiyeh said he felt a recommendation could be made, though a mandate could not be issued. Dr. Sousa said the UT concern is for off-campus activity, which is in the parameters of the Board’s control.

Mr. Sanders, with the Law Department said he was looking into that and whether a curfew could be imposed to prevent gatherings after 10. He clarified that he was asked about “gentleman’s clubs” last week, but he had broadened his inquiry for places that might produce late-night gatherings. Dr. Hurt reintroduced the possibility that if there is a 10 pm curfew on bars, it should apply to all alcohol sales.

Dr. O’Brien asked Mr. Sanders whether the board had the authority to make geographic distinctions. He said the more specific the board gets, the more likely there will be an issue. Dr. Gotcher said he’d gotten a call from Dr. Plowman asking about dropping the gathering number to 25. He said he felt that would be difficult at this time given improving numbers to become more restrictive. It was agreed the board would ask Chancellor Plowman to either make a weekly report or appoint someone to do so.

Dr. Gotcher discussed the meeting with the Senate committee they addressed today. He said Senator Daniel wanted to know how the Board was formed, their credentials and from whence they derived their authority, to which Dr. Gotcher directed him to the TN Code. Dr. Gotcher said it was very cordial and lasted about fifteen minutes. 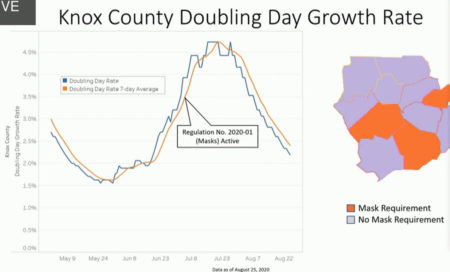 Knox County Case Growth with Mask DateIt was noted that the governor’s executive order allowing Zoom meeting was set to expire before next week. Mr. Sanders said he understood it would probably be extended. Mr. Sanders then stated that the public forum must begin weekly and formats were discussed. Mayor Jacobs said it can be handled. It was unclear when the thinking shifted regarding weekly vs. monthly public forums.

Dr. Gotcher said he didn’t see any feedback regarding the forum and asked Mayor Jacobs if he had seen any. Mayor Jacobs said the public did appreciate it and the reason for going monthly was because it was cumbersome. Dr. Hurt noted that they see comments on FB, get emails, phone calls and more, but the forum is another assurance to the public that they are heard.

Dr. Shamiyeh asked what changed regarding the original agreement to have the forum monthly. Mr. Sanders noted the board decided to follow commission rules in the absence of their own and County commission rules require a forum at each meeting. Dr. Shamiyeh noted this board is different and asked if their decision to do a monthly forum was not a rule. He noted the group is supposed to be driven by data while listening to the public, unlike elected bodies which are more bound to follow the will of the people. He said doing it once each month allows the group to stay on task.

Mayor Jacobs said they are performing a governmental function and have to follow those rules. Mr. Sanders said the Board of Health would have to adopt their own rules if they wanted to have a monthly forum. Mayor Jacobs acknowledged there is a cost in staff time. Dr. Buchanan said some of her staff could help, though she noted to the Board that her staff has other demands on their time and that they are stretched.

Dr. Gotcher said he is in favor of the weekly public forum. Dr. O’Brien said he felt once a month was enough and would like to see that rule adopted. Mr. Sanders shifted the conversation also suggesting that limiting it to 30 minutes is arbitrary and that three minutes may be limiting. Dr. Hurt asked, separate from the sunshine law, is there a law or a rule that requires public forum. Mr. Sanders said there is no law, but as long as they are under county commission rules, it is required.

An invitation was also extended for a representative of the Knox County Schools to present reports in the future.