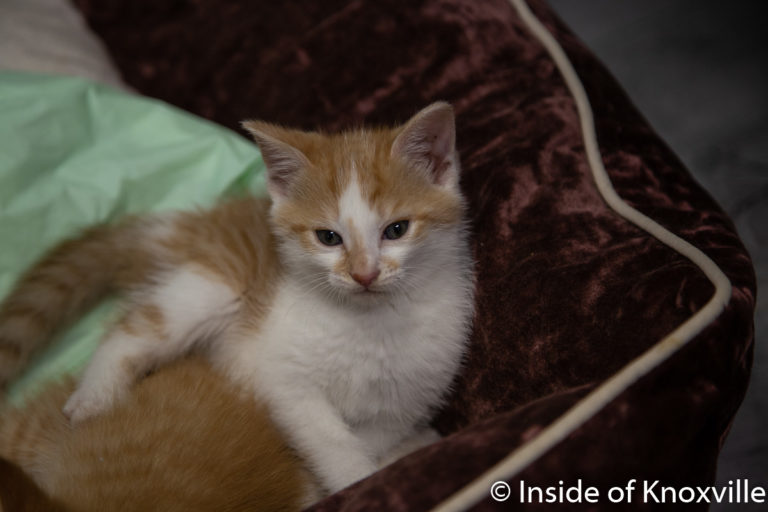 Tennessee appears to be at the cutting edge of the cat world. At least that’s how it appears. I stopped into Scruffy’s Cafe and talked with co-owners Talisa Cantrell and Emily Deas and learned that Tennessee has five cat cafes (with this opening on Friday), which places it atop the states with the most cat cafes. This is Knoxville’s first.

Talisa said it began last winter when she  and her partner (and now co-owner) William Ridenour flew out west to go snowboarding in Pagosa Springs, Colorado. Landing in Denver and with some time to kill, they did a quick search of things to do and found the Denver Cat Company, which is not, as you might guess a production line for cats. They spent some time drinking cider and playing with the cats. Talisa said they looked at each other with the same idea.

Back in Knoxville, where she worked in the mental health field, Talisa called her father and told him that she and William planned to open a Cat Cafe. He was very supportive and then he asked, “What’s a cat cafe?” She explained it’s a place where people can enjoy being with cats, eat a few snacks and maybe take home a new friend if a cat selects them.

They began making plans and finding a location. They connected up with Happy Paws, a local cat rescue organization. Once they had a space, they began a build out that would need to be safe and secure for the cats to roam around since they are a no-cage facility. She said they turn the idea of rescuing a cat on its head, saying sometimes it rescues you, for which they’ve claimed the hastag #whatrescuesyou.

They did a GoFundMe campaign to raise money and had a thousand shares within a couple of days and raised over $4,000, more than enough to get the business moving. Talisa got a message from Emily who said she’d had dreamed of doing this for years and wanted to meet her. She sent a Buzzfeed video in which she was featured. The two instantly connected and Emily became a partner, coming up with the hashtag and design for the logo which she is now painting on the side of their building.

The idea is simple on its face: book a time online (encouraged, but not required) and pay $10 during the week or $12 during the weekend to spend an hour playing with the kittens. While Talisa said that some people check in and run to the back, others linger a bit and get snacks. Snacks are currently available and merchandise is on the way. If you are chosen by one of the furry creatures, an adoption can be arranged.

It’s a strange time to open a business with the pandemic going on, but Talisa said in some respects, it’s ok. Both she and Emily emphasized  that its not just to help the cats, its to help people. It offers a safe and comforting space to spend some time and if ever that was needed, it would be now. Talisa said, “I’m glad we can be here for the community at this time. We want it to be the kind of place where you can forget about what’s outside, pet cats, and talk with others.” She said it’s a “happy space.”

She said some people come in and visit out front, but others make a bee-line for the back where she says “Kitty Paradise” awaits “beyond the golden doors. Once inside, customers will find kittens roaming about and making their people selections. There’s also a blue room which is a sort of symbolic space and reflects the mental health component the two want to incorporate. They are building a resource list of therapists and counselors and hope to use their space for support groups of various sorts. They’ve spoken to local professionals about coming in to help with those.

The two very much believe in animal therapy and think being around the kittens will have a calming effect on people. The two say they are here to make a difference for the people and the animals. As Emily put it, “At our soft opening this weekend, people kept saying this was better than their therapy. Our own cats were important to our mental health and we want that for other people.

The state is releasing $200 million for small businesses, soon. When available, details will be found here.