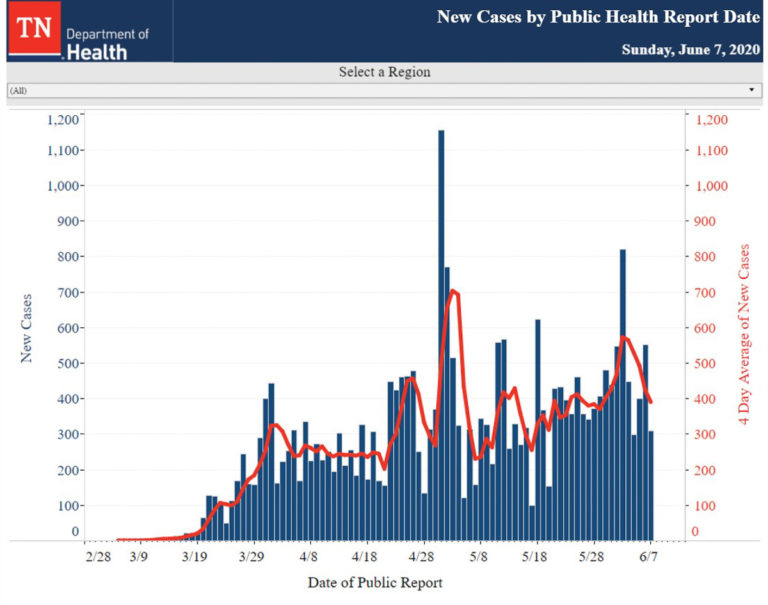 As we begin another week of COVID-19 reports, the county, state, country and world seems to be lurching simultaneously in opposing directions, with some evidence indicating the pandemic is worsening, even as the world economies that were shut down or curtailed to fight it are opening up, once more. Additionally, attention is divided as local protests of police brutality in response to the death of George Floyd have become national and international events. It’s a struggle to know where to train our attention.

There is really no way to characterize worldwide cases other than to say, after a period of leveling off, they are rising once more. While reliable numbers regarding testing worldwide are challenging to obtain, some of the increase may be due to increased testing. After seeming to level off for much of the month of May, U.S. testing does appear to be gradually rising. Other countries are presumably ramping up testing as they are seeing large increases in the illness, while other countries seem to be doing little.

Total worldwide deaths this weekend eclipsed the 400,000 mark, with 3,385 reported yesterday. Almost half the deaths yesterday were attributed to three Latin American countries; Chile (649), Brazil (542) and Mexico (341). In at least two of those three countries, charges have been leveled that large numbers of deaths are not being reported as COVID-19 fatalities when they rightfully should be. Worldwide deaths, which had seen a steady decline now have risen slightly over the last two weeks.

Brazil has been a particularly troubling example of misrepresenting, misreporting and bizarre denial. President Bolsonaro has routinely denied the seriousness of the epidemic from the beginning, only grudgingly allowed the country to curtail economic activity and was rapid to reopen. He has praised Sweden’s approach and seems to want to emulate it. He has stated that states are exaggerating numbers and this weekend the Health Ministry temporarily took down the website reporting the numbers only to return it with information that seemed altered, missing or confusing.

The country continues to have an abysmal testing rate (just over 4,700 tests per million vs. over 64,000 per million in the U.S.) meaning that, no doubt infections and deaths are not being found. Despite that, Brazil now has the second highest confirmed case total in the world with about 692,000, second only to the U.S. total of just over 2,000,000. They are third in the world in deaths with just over 37,000. Hospitals are on the brink of collapsing and mass graves are being used to bury the dead.

Even as Brazil is spiraling out of control, Chile posted the world’s highest death number yesterday with 649, surpassing both Brazil (542) and the U.S. (373). This is in a country with less than 10% the population of Brazil and about 6% the population of the U.S. It also has one of the highest rates of increase, with about a 5% increase just yesterday.

The rate of new daily cases in the U.S., which dropped steadily from late April to late May, has now stabilized and increased slightly. With the impact of dramatic drops in new cases in the heavily populated areas of the country having worked through the statistics, new infections are being more evenly distributed through a wider swath of less populated states.

Florida is among the latest states to be heavily hit, notching five consecutive days over 1,000 new cases daily. North Carolina has averaged just under 1,000 new daily cases for the last week. Arizona reported its highest total of the pandemic, with over 1,500 new cases. The state has seen three consecutive days over the 1,000 mark and state officials say it is not attributable to more testing, but rather to increased contact since lifting of restrictions saying, “The stay-at-home order lifted and people’s behavior changed on a dime and went back to … pre-pandemic behavior.”

Another outcome that is emerging for the virus, beyond short-term death or recovery, is the prospect of having debilitating symptoms for months. The Atlantic reports that thousands are so impacted and their discouraging outcome does not focus on the elderly or the high-risk. Called long-haulers, the story is intriguing and somewhat horrifying. It certainly runs counter to the narrative of “get it and get over it,” that has permeated some conversations.

The state of Tennessee concluded its worst week for new cases on Saturday, with a total of 3,505 new cases for the week. It just surpassed the previous high, the week of April 26th, in which the state reported 3,472 new cases. The encouraging news is that we started this week with 310 cases yesterday, lower than several days last week.

Tennessee also reported, as of yesterday afternoon, 26,381 total cases. The 310 new cases compare to 98 new reported recoveries, which added just over 200 active cases to the state’s load, bringing that number to over 9,100. There was one additional death to bring the total to 418, and nine people were hospitalized across the state. 7,347 tests were given to bring that total to 498,768. For the last six consecutive days, the positive test result rate is 5.6%.

Locally, Knox County, like the state, had its highest reported number of infections from COVID-19 since the beginning of the pandemic, with 73 new cases added last week. The increase for the week in Knox County was over 8%. Seventeen cases were added yesterday to bring the total to 496 since the beginning of the pandemic. The number of active cases is 96, with three Knox County citizens currently hospitalized. No new deaths have been reported. The largest group of positive tests have been for people in their 20s (over 21%), with people in their 30s (over 17%) falling just behind that group. There are ten probable cases.

Dr. Buchanan lead today’s press conference, expressing gratitude to this year’s graduates who have had to adapt in their senior year.

She stressed the importance of wearing masks. She said people have asked why they should do so when they feel fine. She said the virus is spread by droplets expelled from people’s mouths. People don’t have to have symptomatic to spread the virus. She said that 22.6% of our currently active cases are among people with no symptoms.

These people can spread the virus without knowing it. This is why masks are so important, as they catch droplets. She said you should wash your hands before putting the mask in place. It must cover your nose and mouth. It does not need to be more than a simple cloth face covering. A bandanna is fine. She acknowledged it can be stuffy and uncomfortable, but it protects others who may  be vulnerable to a severe case.