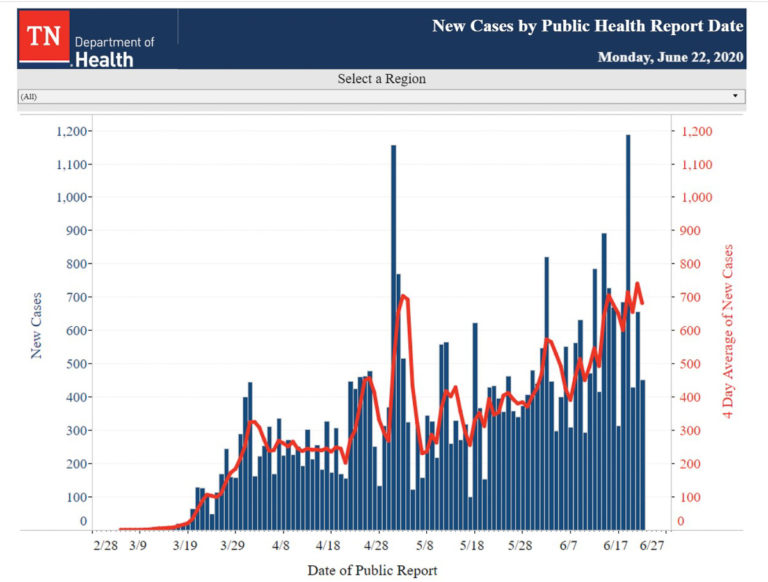 Businesses continue to re-open and new ones are opening. We’re moving around more and we’re making plans for school openings. For this progress to continue, we need to work together to stop the spread of COVID-19. Please do your part to keep yourself and those around you safe.

The number of daily cases reflected a slight drop, but the trend is clearly continuing upward. The seven-day moving average is now running almost 149,000 new cases per day. The average is higher than any single day before last Friday. The number of deaths, after declining for weeks, is now rising. Whereas the daily death rate had dropped to around 4,100 per day in late May, it now sits at about 4,800 per day a month later.

There were nineteen different countries reporting more than 1,000 new cases yesterday. Three countries had more than 10,000: The U.S. (31,496), Brazil (24,358) and India (13,540). The three top countries contributed over half the new cases in the world. Centers for the increases continue to be the Americas, the Middle East and Southeast Asia.

Around the world, Saudi Arabia is not allowing foreign travel to the annual Hajj, and is limiting its own citizens to a few thousand at most over the month. The annual pilgrimage usually draws over 2 million Muslims from around the world. Britain is easing restrictions, including reducing the two-meter distance suggested to three meters based on complaints commerce is not possible with the former. A Brazilian judge ordered President Bolsonaro to wear a mask in public or face a fine like everyone else. Following his failed tournament in which the number three tennis player in the world was diagnosed with COVID-19, the world’s number one tennis player, Novak Djokovic, has announced that he and his wife have also tested positive.

Clearly, cases are once more going up significantly. After moving our seven-day average down from a high over 32,000, it bottom out two weeks ago about about 21,300 new cases per day. We are now averaging about 29,200 new cases per day, an increase of about 37% over a two week period.

Equally as clear, deaths are declining. The total from the last two days is the lowest two-day total since March. After peaking at just over 2,200 deaths per day, we are now averaging just over 600 deaths per day. If we can continue to reduce deaths while opening up our economy, that will be seen by some as a victory. But there are questions.

For example, one theory on the reduction in deaths is that the largest groups being infected are in their 20s and 30s and less they are less susceptible to dying from the illness. But they are also the heart of our workforce. If enough of them are in quarantine, who is doing the work that allows our economy to be reopened? There are currently about 1.3 million active cases in the U.S. and those people are presumably quarantined. The number is growing. Additionally, look no further than downtown, where at least two restaurants have temporarily closed out of concern their employees may have been exposed.

The second question relates to what happens when people in this younger age group are infected. Do they infect their parents, grandparents and older co-workers before they realize they are ill? If so, that would be a delayed impact on the death rate. It is instructive that the world death rate, once dropping, is now rising again after a new surge in cases. Can we avoid the same pattern in the U.S.?

Testing has once more dominated the news, as President Trump said in his speech last weekend that he had asked for testing to be slowed so the numbers would be better. Then the White House a statement that he was simply joking and that should have been obvious. Today he said he doesn’t joke about such matters. So, who knows?

But testing does matter and having it accurately discussed does matter. An increasing refrain has been the idea that, sure America leads the world in cases (with 2 1/2 times the amount of any other country), but that is simply the result of the fact that it leads the world in numbers of tests given (it has given about 1.7 times as many tests as Russia, which is second). So, even using those numbers, if the difference was testing, we should not have 2 1/2 times the cases of anyone else in the world.

The best comparison, of course, is per capita tests and cases. The U.S. is one of the world’s most populous countries (#3), so maybe it is a factor of our population, plus extensive testing. In per capita cases (among countries with 1,000,000 or more in population), the U.S. does not rank first but, in fact, ranks 7th. So, if we are the 7th worst hit country in the world is that because of testing? No. In per capita testing we rank 16th.

Dr. Fauci said today there has been no slowdown in testing nor any request to do so. Noting the increases in cases today, Dr. Fauci said it cannot be explained by further testing because the rates of positive tests are not going down.

As noted above, the state of Tennessee reported the 17th highest number of new cases among the states, yesterday. The 451 new cases for the day, brought the total to 35,533 since the beginning of the pandemic and represented an improvement over the previous day’s total of 656. 500 people were moved into the recovered column, reducing our total active cases by 49 to 11,455.

An additional five people died, which reflects the national trend toward fewer deaths, but also brings our total to 531 who have died in our state. About 14,500 tests were given yesterday, bringing that total to right at 700,000.

Locally, after setting a single-day record yesterday with 24 new cases, we jumped 50% the next day, with the Knox County Health Department reporting 36 new cases today. This brings the total active cases to another record for our county, at 161, a concern for future serious illnesses, but also for contact tracing as each of those 36 have likely had significant numbers of contacts, given how much Knox Countians are now moving about.

The best news for the city continues to be the low hospitalization rate, which is now 3 Knox County residents currently hospitalized and the lack of deaths in recent weeks, with that number remaining at a total of five. As noted above, if we can maintain low hospitalization and death rates, while keeping enough employees healthy enough to run the businesses, maybe we can pull out of this. Here’s hoping.