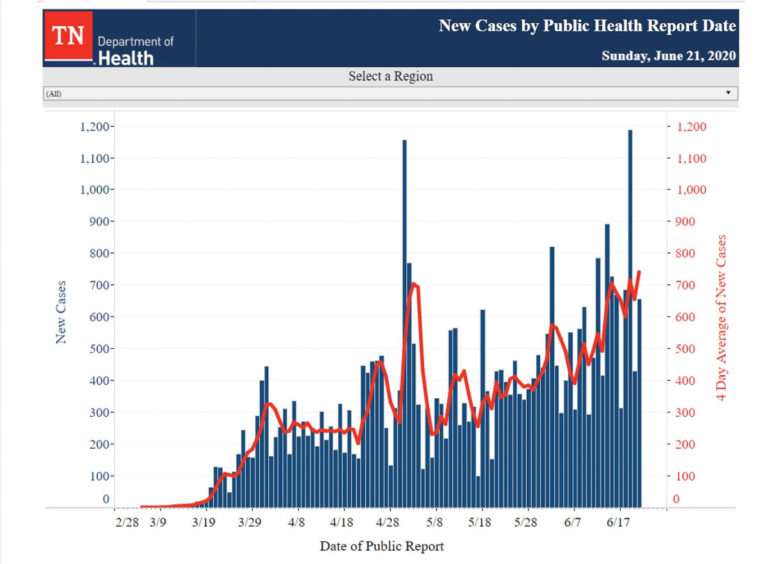 Welcome to another week, everyone. Cases continue to rise across the world, country, state and county. Here’s hoping for a better week than last week, which was by many measures the worst week for new infections since the beginning of the pandemic. There is good news, so far, with the continuing drop in deaths. We’ll look at why that might be happening and more.

There are 9,087,806 cases and 471,396 deaths across the world since the beginning of the pandemic. We’ve added our most recent million cases in just the last six days. The previous fastest pace to add a million was the previous million, which took eight days. Last week broke the record for weekly and daily reported cases in the world. Yesterday, 130,459 new cases were added, as well as 3,338 deaths.

Worldwide deaths, after about a six week decline during which much of the world’s economy was shuttered, has risen slowly in recent weeks. The seven-day average is 4,753, about the same number as early-to-mid May. The increases in reported deaths are coming largely thanks to increases in Brazil, India and Mexico, as well as to continuing (relative to the rest of the world) high numbers from the U.S. The four countries combined yesterday accounted for over half the deaths in the world. Brazil, India and the U.S. together accounted for about a third of the new cases in the world yesterday.

The situation in India has worsened to the point that people are dying after being turned away from overwhelmed hospitals. France is opening schools and joining other European countries in opening borders. A tennis tournament in the Balkans hosted by the number one player in the world, Novak Djokovik saw its final cancelled after the number 3 player in the world was diagnosed with COVID-19. The series of matches featured packed stands, no distancing and no mask requirements. Other cases are now being traced to the series.

Since the beginning of the pandemic, the U.S. has reported 2,360,593 cases of COVID-19 and 122,281 deaths have been attributed to the disease. New cases, after peaking at around 32,400 cases a day in early April, began dropping as the country was shut down, falling to about 21,500 by May 28. The seven-day moving average is now at roughly 27,700 and is rising sharply. States across the south and into the southwest are driving the surge in cases.

Deaths have continued to decline. After peaking at just over 2,200 in late April, the seven-day moving average has dropped to just over 600. This is one of the most fascinating parts of the story. No one knows for certain why the death rate has dropped more rapidly than the case rate. It could be that testing is identifying more mild cases and the number of severe cases is dropping. It could be that we are better protecting the most vulnerable populations.

Another plausible explanation was posited this weekend by a former director of the CDC who suggested the reason is that our current surge is among people in their twenties and thirties who are less likely to die from the illness. His projection is that the death rate will remain low until this group infects their older friends, parents and others and then we will see a surge resulting from their deaths. That would project deaths five or six weeks from now. If the current group is going to drive a surge in deaths, we should see that right away as the surge in cases began about two weeks ago.

In a continuing frustrating trend, some states are not counted each day. Yesterday Worldometers was unable to retrieve numbers from Mississippi (again), Rhode Island and Idaho. This distorts the picture and diminishes the accuracy of the numbers.

Health officials and former health officials continue to maintain the virus is not going away and the increases are not simply a result of increased testing. Meanwhile, New York City is reopening offices this week, even as it is being reported subways are outpacing predictions for increased ridership. Politico has a piece examining the differences between the European approach and the U.S. approach to the pandemic.

Like the country, the rate of infection is accelerating in Tennessee. The state set a record three weeks ago at 3,505 new cases, came close the week after at 3,470 new cases and shattered the two-week-old record last week by roughly 40%, with 4,905 new cases. As noted above, Tennessee had the tenth largest increase among the states yesterday, with 656 new cases.

Two people died from the virus, yesterday, and an additional 25 were hospitalized. The state reports just over 10,000 new tests were given yesterday, bringing that number to over 685,000.

Locally, Knox County reported its second-highest number of new cases last week, with 85, which was superseded by the previous week’s 93. This week has started with 15 cases on Sunday and 24 new cases today. This is the highest two day total for Knox County since the beginning of the pandemic and today’s numbers are the highest single-day increase.

There are 135 active cases as of today (which I think is a new high), four people are hospitalized and there have been no new deaths. There are 26 probable cases.

I was challenged on Facebook this weekend for selectively omitting facts. This particular person seemed to feel I was exaggerating the danger across the county by ignoring that “90%” of the active cases are in a group that makes up less than 5% of the population. He is referencing our Hispanic population. Two problems: Knox County does not report ethnicity for active cases, so we have no idea that number. Also, for total cases, the Hispanic population represents about 34% of positive test results. I can only cover so many different statistics and while this one has been alluded to numerous times in the questions, it has simply not been one that I found critical to report here. Now I have.

Charity Menefee chaired the meeting, thanking those who are answering questions from the media and public. She began by noting testing is still available 9 – 3 at the Knox County Health Department M-W-F. She also noted a testing option is open today on Magnolia.

She affirmed the above numbers. She acknowledged a notable increase and said it is concerning. She said they continue to stress for people to wear masks, physically distance, sanitize surfaces, wash your hands and stay home if ill. She said she knows some of these actions may not be desirable for everyone, doing so protects others and will allow us to open up and remain open.