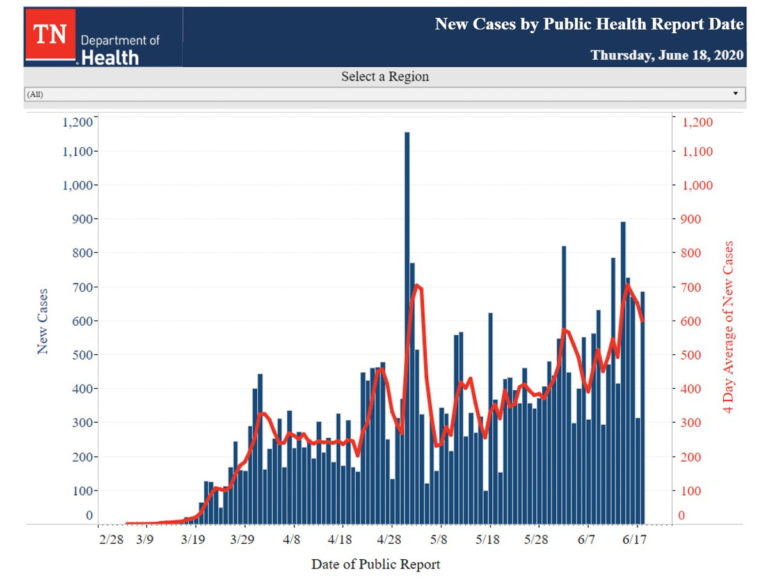 Welcome to Friday, everyone. I hope your week was acceptable and your weekend might bring some mild pleasures. How is that for adjusting expectations? Seriously, stay safe and find some joy. Life is too short to defer happiness. Grab it where you can find it. (But wear a mask.)

8,618,787 cases of COVID-19 and 457,275 deaths from the disease have been reported worldwide since the beginning of the pandemic. About 1.6 million of those cases are currently active. Yesterday, 140,528 new cases were reported, as were 5,123 deaths. The number of new cases represents a slight drop from the previous day, but continues the upward trend in cases worldwide and the number would have been shockingly high just a couple of weeks ago.

Worldwide deaths continue to increase in number after decreasing solidly during the month of May. With the total number of deaths crossing 5,000 yesterday, we’ve lost more than 5,000 people for three consecutive days. This had not happened in over a month. The current seven-day average for daily deaths is over 4,600 per day, up from about 3,900 per day almost a month ago.

Given the numbers in the above paragraph, it is clear that a few countries continue to report an out-sized proportion of the world’s cases, with the top three countries accounting for over 50% of the world’s new cases, yesterday. That said, the number of countries reporting at least a thousand new daily cases continues to be around twenty, with twenty-one on yesterday’s list.

While much of the list is comprised of North and South American and southeastern Asian countries, a couple of European countries continue to struggle. The UK has seen a dramatic reduction in cases, but reducing them further has proven difficult, while Sweden is reporting a significant increase in cases. The UK reported 1,218 new cases for the day to rank 20th, while Sweden reported 1,481 new cases to rank 15th. The increase for Sweden marks its second highest daily total since the beginning of the pandemic, with the highest coming last week.

The New York Times reports that seventy-seven countries have seen increases in daily cases over the last two weeks. A new study in Italy reveals that Coronavirus was present there at least as early as December.

There are currently 2,266,655 confirmed and reported cases and 120,738 deaths from COVID-19 in the U.S. since the beginning of the pandemic. Yesterday’s reported totals included 27,924 new cases and 747 deaths. The number of new cases is the highest of any single day in almost a month (May 21). But the true number yesterday was higher . . .

Four states simply chose not to report, at least at their normal times. There are no daily death numbers for Louisiana, Mississippi, Kansas and Missouri. Louisiana said they were not reporting in order to check their records and make sure there were no duplicates. Mississippi said there were problems with their system and later reported 381 cases (which are not included in the total above). I did not research the reasons Kansas and Missouri did not report. Maybe they decided if they didn’t report, the virus count would go to zero?

While cases appear to be rising, again, across the U.S., deaths are clearly still in decline. It doesn’t take a moving-average line like the one in the graph above to see that this marks the eighth consecutive week we’ve had fewer deaths. That is the good news. The question will be whether we can maintain that downward trajectory if the number of cases continues to increase. Witness world numbers above, where the death rate declined for about two weeks after the number of cases began increase from a previous plateau. Now both are on the rise.

In other national news, masks continue to be a political flashpoint, with California (they recorded a new high of cases on Wednesday) now requiring them indoors and in some outdoor settings, Arizona’s governor relenting and allowing cities to require them (Arizona also broke their daily record this week and a sheriff who publicly flouted stay-at-home orders, now has the virus). American Airlines banned a conservative activist and ally of President Trump who refused to wear a mask on the airlines. AMC theaters in announcing they would re-open next month said that masks would be optional in the theaters because they did not want to be involved in the political controversy.

Meanwhile, at least as early as yesterday, a line is formed outside the BOK Center in Tulsa for the president’s rally on Saturday night. No one that I saw pictured in line wore a mask and, though I’ve seen it both ways, the last word I’ve seen is that masks will be optional inside the arena. Oklahoma also reported its highest number of new cases for a single day this week. South Carolina set a new single-day record yesterday, which was the sixth time it has broken the record in the last ten days.

The good news is that, unlike some of our neighbors, we are getting the numbers out on time every day. That’s about where the good news ends at the state level. Yesterday afternoon, the state reported 686 new cases for the day to bring the total since the beginning of the pandemic to 32,829. It was the states seventh worst day, with four of the others coming in the last 16 days. Week before last was Tennessee’s worst week for new cases with 3,505. Last week was second worst with 3,470. This week will likely set a new record as we have 3,388 with two reporting days remaining.

The 686 new cases were largely offset by the 667 recoveries announced yesterday, leaving our total active cases, while probably at their highest levels so far, virtually unchanged at 10,880. There were twelve additional deaths in the state and twenty-nine people were hospitalized yesterday. There were about 7,800 tests reported for the day to bring that total to just over 652,000.

As of Wednesday, Vanderbilt University reported we’d reached the highest number of hospitalized COVID-19 patients since the beginning of the pandemic. They said the number reached around 400 and reflected about a 30% increase from the previous week, with the Memphis and Chattanooga areas seeing the largest increases. They said the situation is not yet acute.

Locally, the Knox County Health Department is reporting 21 new cases today, bringing our total since the beginning to 632 and increasing our number of active cases to 106. Two Knox County residents are currently hospitalized and there have been no more deaths. There are 26 probable cases. We now have 75 new cases for the week, which is more than the record we set week before last. That record was broken last week with 93 new cases. We have one reporting day remaining in this week.

Dr. Buchanan began today’s briefing by acknowledging Juneteenth and Father’s Day. She noted that we are now, per Board of Health’s decision, moving toward the state’s plan. She said a link comparing the two has been added to the Knox County Health Department website.

Charity Menefee, after confirming the above numbers, discussed the benchmarks, which are updated today. The only benchmark which had previously been anything other than green was the number of cases. That red light has now been changed to green because over the last two weeks our numbers have been stable, though still increasing slowly. She said they have not updated the testing benchmark because of data issues with reporting it for the previous week. She said anecdotally, they feel the numbers are good.

She acknowledged an increase in reporting time, but said it is still acceptable. All other benchmarks were deemed acceptable and will remain green for the week. She noted they are making plans to increase the number of contact tracers, though they have been successful at contacting everyone within the 24 hour time frame set as a goal. She also noted that hospitalizations remain small, but are increasing.