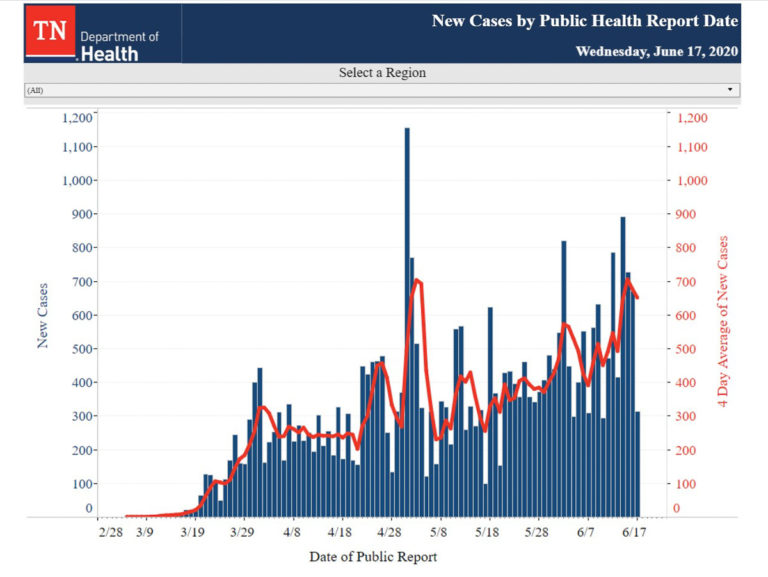 Well, Thursday comes with changes as Knox County will begin following the state plan as soon as practical to make the shift. The current orders for the state are very similar to the current guidelines for the county, but there will be some shifts. The primary difference going forward is that all decisions for the local populace will be decided in the governor’s office.

8,478,208 cases of COVID-19 have been confirmed around the world since the beginning of the pandemic. 452,225 deaths have been confirmed. Yesterday, there were 145,954 new cases reported and 5,264 deaths across the globe. For the second consecutive day, there were more cases confirmed than in any day since the beginning of the pandemic. Reported deaths continue to increase slightly. The seven-day moving average for deaths dropped to around 3,900 earlier this month and now sits around 4,600.

Looking through the countries in that top group, seven of the twenty-two are in the Americas, roughly (I’m doing mental geography, here) five are in the middle-east, four are in southeast Asia and three European countries have now risen into that group, led by Sweden, which is closely followed by Germany and the UK. The other countries are scattered around the world.

2,243,406 cases of COVID-19 have been reported in the U.S. since the beginning of the pandemic. 120,095 Americans have died. Yesterday an additional 26,071 cases were reported, along with 809 additional deaths. After hitting a low average of just over 21,000 new cases per day at the end of May, cases are now averaging 24,000 per day. The current increases are largely coming from states which were spared the worst of the outbreak in the early portion of the pandemic.

The best recent news in the U.S. has continued to be the number of deaths reported each day. This past Sunday saw the lowest number of reported deaths since March in the U.S. While deaths have increased in the days since, they appear to be following the same cyclical pattern seen throughout and the average has continued to drop, currently sitting at 687 deaths per day.

The shift of the virus to the southeast and southwest continues to be a trend. There were five states reporting over 1,000 new cases yesterday and three of them were well over: California (4,179), Texas (3,511), Florida (2,610), Arizona (1,827) and North Carolina (1,027). Here’s a way to put that in context: If these states were countries, four of them would have ranked in the top ten countries in the world for new cases, yesterday.

In addition to Texas, Florida and North Carolina in the top five, other southern states in the top twenty for the day included: Georgia (#6), Louisiana (#7), South Carolina (#9), Mississippi (#12), Virginia (#14), Arkansas (#15) and Alabama (#18). Tennessee was the odd southern state out yesterday, dropping to number 22.

New research out suggests that how long a person retains anti-bodies may relate to how severe a case of COVID-19 the person experienced. It appears the anti-bodies last for two months, and possibly longer. Some Texas counties are now requiring masks and Arizona’s governor has now allowed cities to put mask requirements in place. Hospital patient numbers have more than tripled in Arizona in just the last two weeks.

Vice-President Pence sounded a similar note on the White House website, “In recent days, the media has taken to sounding the alarm bells over a “second wave” of coronavirus infections. Such panic is overblown. Thanks to the leadership of President Trump and the courage and compassion of the American people, our public health system is far stronger than it was four months ago, and we are winning the fight against the invisible enemy.”

As mentioned above, Tennessee fell out of the top twenty list for new cases of COVID-19 for the day, yesterday, thanks to a significant daily drop in new cases. With 313 new cases reported, it was not the best recent day, but it was among the best. This brings the total to 32,143 since the pandemic began. With 572 people considered recovered as of yesterday, the number of active cases declined by about 250 to 10,861.

Four additional Tennesseans died yesterday and 34 more were hospitalized. Almost 5,600 tests were reported for the day, bringing the total to just under 645,000.

The biggest news for Knox County is that we are now in the process of phasing out of our local plan and joining the state plan. If you missed that article this morning, you can read here how that decision was made at last night’s Board of Health meeting. If you’d like to read for yourself what the latest executive order from the governor dictates, you can do so here. There are no official phases under the governor’s reopening strategy.

Locally, there are fifteen new cases of COVID-19 reported today by the Knox County Health Department, bringing our total since the beginning of the pandemic to 611 cases. There are currently 89 active cases and four Knox County residents hospitalized. There are no additional deaths and 26 probable cases.

One thing we did learn from yesterday’s Board of Health meeting is that Dr. Buchanan feels daily cases reaching the 20 new case level is a concern for her. We’ve known the benchmarks, but information as to what would trigger a change in concern for one metric or another has been less clear. That puts today’s fifteen in a new light and under the level of being concern.

What is less clear to me is whether an alarming change in the metrics would produce any local action. Now that we are under the state’s plan, if our local data seems worse than others across the state, would the Board of Health diverge from the state strategy? Hopefully our local numbers remain positive, for the most part, and we don’t have to find out.