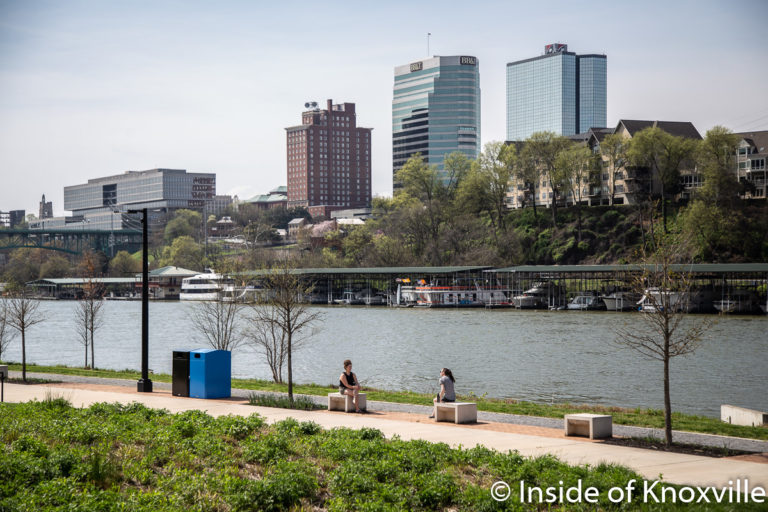 March 16 is just a metaphorical minute ago. It was the first day I wrote about the COVID-19 pandemic. I felt if I didn’t address it, it would be the elephant in the room. I’d talk about it, then get back to my normal topics of cool things happening downtown. Little did I understand that the elephant was bigger than the room. That this would be the new normal. Just over three weeks ago and it seems like ages. And from all indications, this will be our normal for many more weeks.

I hope you are taking care of yourself. The strain is getting harder for many people who are worried about their finances, their health, people they love. Please reach out to others to check on them. I’ve appreciated every time someone has done that for me and we are trying to do so for others. People are hurting and they need contact, as well as other kinds of support.

Midday numbers today include 1,346,004 cases and 74,654 deaths worldwide. These numbers represent a 4.2% increase in cases and a 5.6% increase in deaths. The numbers continue to indicate there may some international leveling off. Daily numbers of diagnosed cases, though still very high, seem to be dropping across Europe (including Sweden) and may have plateaued in the U.S. If these last few days turn into a trend, it will be very encouraging.

As indicated above, our national numbers may be showing signs they have peaked, meaning the numbers of new cases and deaths are not coming as rapidly as before. That said, the numbers continue to be very large. As of mid-day today, there are 377,499 cases in the U.S. and there have been 11,781 confirmed deaths. These numbers reflect a 11.2% increase in numbers of acknowledged cases and a 21.5% increase in documented deaths from the virus.

The percentages of increase have reduced slightly, but are so high that we are clearly not close to the end. Another statistical distortion to watch, going forward, if the pandemic behaves as the models predict: Our national numbers will rapidly improve even as cities and states across the nation get worse. This is because New York’s population is so massive that it can mask what is happening elsewhere when using national numbers. Their numbers have made the national numbers look worse and they will make the recovery look better.

The U.S. currently has more confirmed cases of the virus than any other country. It ranks third in the world in deaths. I’ve had readers and Facebook commenters imply that these numbers are distorted because we have such a large population. When looking at the data strictly per capita, the U.S. ranks number 21 in cases and 17 in deaths.

That, however, includes countries with populations less than 10,000, which isn’t a fair comparison given that the 7 cases in Vatican City (population 618) places them at number 1 in the world for most cases per capita. If we really want to look at meaningful per capita numbers, removing countries with total populations of 650,000 or less, places the United States at 9th in cases and 11th in deaths.

The other number that seems to give some people consternation is the number of tests. When criticism is given that the United States did not test enough, early enough, to slow the impact, the response is that the U.S. has now given more tests than any other country in the world. This is correct, with 1,955,000 tests administered. However, the per capita numbers are definitely the appropriate lens for this number, given that the wider spread the testing, the more intelligent the controls. By this metric, the U.S. ranks 40th in the world. Removing the countries with very small populations, the ranking is 19th.

At the state level, the most recent numbers released include 3,802 confirmed cases and 65 deaths. This represents a 4.7% increase in identified cases and a 47.7 percent increase in deaths in a 24 hour period. While the overnight rate of increase in deaths is alarming, if the number of new cases can continue to increase at the slower rate, the death rate will follow. Tennessee ranks 28th in the U.S. in cases, 30th in cases per capita, 26th in deaths per capita and 36th in tests per capita.

Questions raised by the numbers above include: Is our low rank in cases and deaths due to our low rank in testing? Have we avoided the worst of the illness? Have we just begun to deal with it at that the state level?

Also at the state level, Governor Lee says he has no plans to expand Medicaid (allowed under the Affordable Care Act, but never activated by Tennessee) in order to help those who have lost their insurance. He’s also said that he hasn’t made a decision yet whether he wants to extend unemployment benefits to the self-employed, contract and gig workers. He may make a further announcement about it this afternoon. According to the Tennessean, this includes about 185,000 workers statewide (including me, for example).

Locally, Knox County is reporting 126 positive tests, with 74 recovered and 3 deaths. 16 people have required hospitalization. This reflects a 5.9% increase in cases and a 200% increase in deaths in the last 24 hours. The numbers continue to be relatively small and the increases generally low (the 200% is distorted by the low numbers), which led me to reach out to the health department with a couple of questions:

Answer: It’s important to remember that our hospitalizations that we have reported are only the Knox County hospitalizations and the hospitals serve more than Knox County. We are viewing models every day and they are helpful. However, given that this is a novel virus pandemic that appears to be highlight infectious, it’s prudent to plan for the worst-case scenario.

2. How would that additional site be staffed?

Answer: Information about the site will need to go to the Medical Surge and Alternate Care Site Task Force. You can expect to get more information from them in the coming days.

Some recent models are suggesting that Tennessee will have fewer cases and deaths than previously thought and that the beds and ventilators will be adequate.

Dr. Buchanan began her press conference noting the two additional deaths and extending her sympathies to the families of those people. All three deaths, she said, came from people in high risk groups and included a 93 year-old woman, 86 year-old woman and a 63 year-old man. She says our local data is in line with national data, saying it underscores

Noting that the Safer at Home order has expired, she reminded everyone we continue to be under the governor’s Stay at Home order, which expires April 18. She said by that time, the county will evaluate numbers and determine what should come next. Saying some models look encouraging, but wanted to emphasize that those models are contingent on continuing to follow the orders in place.

There were no questions beyond clarifications.