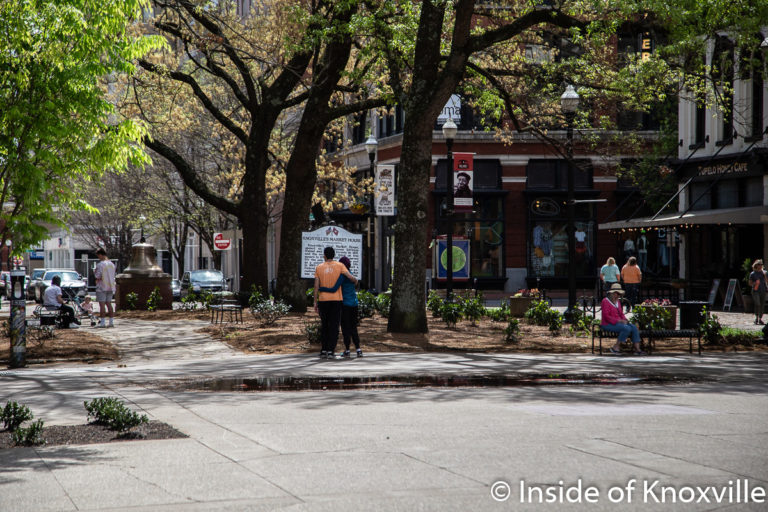 Market Square, A Quiet Spring in the Time of the Coronavirus, Knoxville, March 2020

It’s a beautiful spring day outside. If anything, the impact of the current pandemic has given nature a brief reprieve from human damage in some respects. The air is a little cleaner, the horizon maybe slightly more clear and the flowers are blooming as if nothing happened. I hope you can get outside to enjoy it while you social distance. I’ll be sending out more photographs of my wanderings very soon and I have some beautiful photographs to share.

There are currently 2,119,300 confirmed cases of COVID-19 worldwide. There are 141,945 confirmed and acknowledged deaths. Relative to yesterday, this reflects increases of about 4.5% and 9.9% respectively. Each of these increases is significantly worse than yesterday as the virus continues to traverse the world. This is the high end of a range we’ve bounced around in for a while.

Contributing to these numbers, the U.S. has the largest numerical increases in both categories in the world. Brazil, Russia, Ireland and Peru are the most prominent in seeming to be early in their curve, but having significant increases. Other countries with small, but rapidly increasing numbers include Pakistan, several Balkan countries, Peru, the Dominican Republic, Argentina and, perhaps, India, which could be a stunning disaster in the longer term.

The flip side is starting to get some needed attention: countries that did well. CNN has an excellent article on these countries that delves into what they did and when they did it. It’s the kind of information that we might help informs all other countries if and when we encounter a second wave. Among the star countries: Taiwan, Iceland, South Korea and Germany. In a nutshell, they were more prepared than other countries and acted quickly and aggressively. One small example: Taiwan imposed social distancing orders when it had only 329 cases whereas the United Kingdom imposed them when it had over 3,000 cases and much of the damage was done. For comparison sake, Taiwan’s population is just under 24 million and the UK has a population of about 67 million, so it is more like a third of the cases per capita.

As the debate regarding the timing and nature of opening our economy and travel restrictions back up, the numbers were not encouraging for the last twenty four hours. Yesterday (from the site I use, which I think tabulates from 10 pm to 10 pm EDT) there were 30,487 new cases diagnosed and 2,763 deaths, making it the deadliest day and one of, if not the highest for new cases.

The mid-day numbers are 653,751 cumulative cases and 33,434 deaths. These numbers represent a 24 hour increase of 5.7% in cases, which is significantly faster than yesterdays’ increase, though one day does not make a trend. The increase in deaths is a rougher estimate because it appears that the cumulative (though not daily) total now includes cases that were not previously counted, due to changes in what is accepted.

Should the above numbers become a trend, our conversations will have to pause about reopening. Assuming we have indeed peaked and yesterday’s increases were anomalies on the way down, we’ll continue to see conversations about partial reopenings either geographically or within certain industries. There seems to be agreement that “normal,” as defined as what we did before the crisis is not going to happen for a long time.

Here’s one of a number of articles suggesting that public gathering for large concerts and sporting events may well be a thing of the past until as late as the fall of 2021. Power Five conferences and the Vice President announced yesterday there would be no college football if campuses are not open. Simply that we would be uncertain if college campuses would be open in the fall is startling enough.

The latest numbers from the state of Tennessee indicate 6,079 confirmed cases and 135 deaths attributed to COVID-19. This reflects a 24 hour increase of 4.4% in cases and 8.9% in deaths. Relative to the previous day, these numbers show an increase in new cases and a decline in increases in daily deaths.

The biggest news in the state yesterday was that Governor Lee issued guidance encouraging schools not to reopen for this academic year. This follows a national trend among other states and it is probable that, although this is not a state-wide directive, most school systems will likely follow that guidance. Locally, Knox County and Oak Ridge Schools (and probably many others by the time you read this) have announced they will not reconvene for the year.

The Knox County Health Department is reporting 186 total cases, while deaths remain unchanged at 4. The increase in cases represents a numerical increase of 14 and a daily percentage increase of about 8.1%. These numbers are larger than those reported on previous days. There are currently 38 known and active cases and 21 people have required hospitalization at some point in their illness.