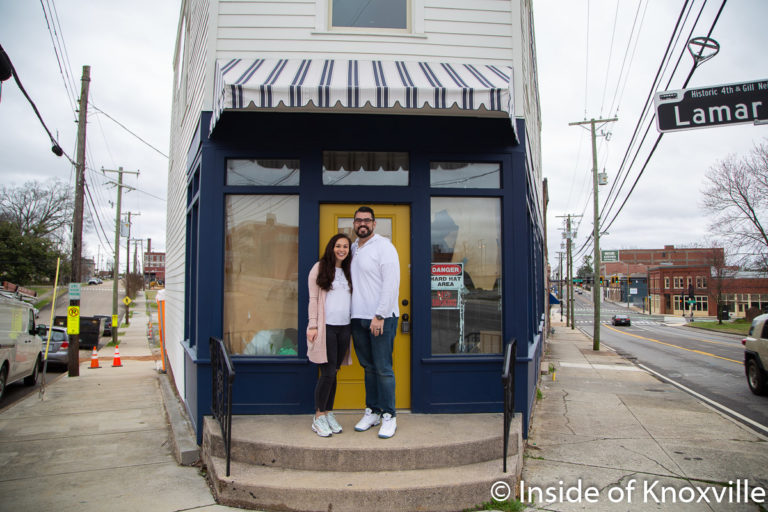 In these strange times, it’s important to know that good things are still happening, plans are being made, and dreams are being realized. With that in mind, I introduce the Donut Shop, a near-downtown business that plans to open soon at 724 North Broadway. It’s family owned, and the effort is being spearheaded by Avery Gentry and her father, Brian Gentry.

Brian is from Ohio, where he graduated from Ohio State. After a stint in St. Petersburg Florida, he moved back to Columbus where a friend helped him get a job with a telecommunications company. That company moved him here fifteen years ago, and he fell in love with the city. He feels he was given the gift of planting roots and developing relationships in Knoxville and he sees the Donut Shop as an continuation of that. After twenty-three years, he still works for the same telecommunications company, but is excited for this new venture.

Avery worked for a local donut shop during college. She graduated with a degree from Carson Newman in social entrepreneurship. She’d come home after work and she and her Dad would talk about her day and he’d  ask questions. During one of those conversations she said, “We could do that ourselves.” That was April 2017, and they began research the next day. They took courses at the Small Business Development Center. They were told their business plan looked great, but that no one would fund it and 95% of businesses fail.

However, they found their funding through Brice Chapman at Mountain Commerce Bank. With that backing, they began searching for a spot to call home. They love buildings that are shaped to a point and, last spring, two years after that original conversation, when they saw the building at 724, they fell in love with it and the location.

The family lives in East Knoxville, but Avery had worked downtown, and they really wanted to be in a historic district where, “a lot have people have walked these streets.” They also liked the size of the available space (they will have the downstairs while Jessica Rodocker has the upstairs for her First Neighborhoods Realty), which is just enough for a small shop, with 942 square feet. Leon Williams Contractors are doing the construction and Zarah Bates with Z Creative Group did the design.

Initially they were planning to start with cake donuts and add yeast donuts later, but they have now decided to go all-in from the beginning. All the donuts will be made from scratch in the shop on Broadway, and there will soon be a gluten-friendly option. Eventually, they plan a sugar-free protein donut. Coffee will be provided by Mahalo Roasters, with the possibility of later adding coffee from a grower the family knows in Matagalpa, Nicaragua.

When the shop opens you’ll find Avery adding the glaze and greeting customers as the general manager. The shop will offer seating for about fifteen, and they want people to gather and enjoy friendships and make new ones. There will be a bar top along the window facing Broadway and plugs for computers along with great wifi.

They hope to be open in April and they plan to open six days a week. They will experiment with hours, depending on business. Follow them on Instagram and Twitter.

Ed. Note: I felt like we needed a break from coverage of the virus, but I’ll continue to monitor the situation and will likely have more, possibly this weekend. I will not, however, have a ten day planner for the first time in years. I simply can’t encourage people to attend events at this time. Hopefully, we can all get behind a resurgence before too much time passes.