COVID-19: Knox County Health Department Briefing and Other Updates for 3/25/2020 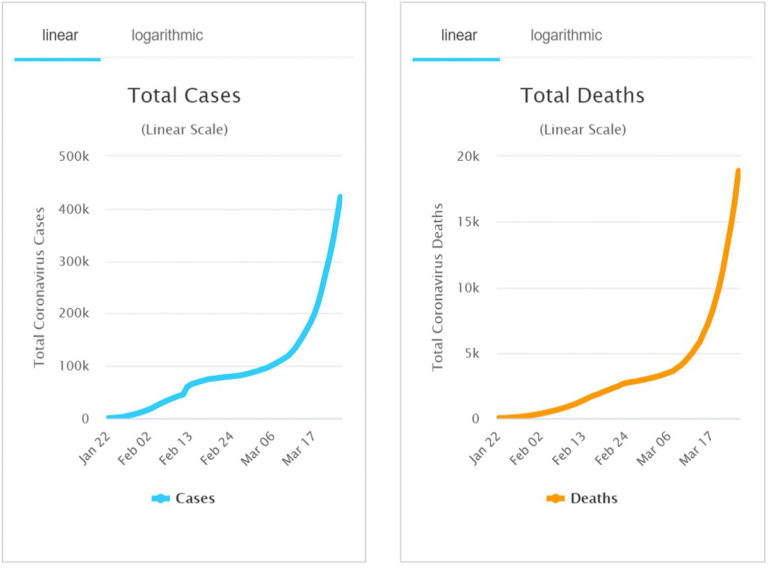 Rapid developments continue at the international, national, state, and local level. One of the growing frustrations is the limited coordination between the various levels and the cohort levels. National suggestions, state suggestions, state and local requirements, adjacent states with different requirements, and confusing press conferences are making the job of being as safe as possible more difficult.

At an international level, the numbers continue to track upward. Deaths in Spain (3,434) and Italy (6,820) have now surpassed deaths in China, which is pretty stunning when you consider that China’s population dwarfs that of the other countries. Worldwide cases are now up to 446,563 cases and 19,803 deaths.

Nationally, we currently have 60,038 cases and 808 have died. We added 11,075 cases and 225 deaths yesterday alone. The cases added probably still reflect a backlog of tests, but that effect should soon pass. However, the deaths are harder numbers. I’m not sure how deaths of people who were not diagnosed but are dying of the disease are counted, so those may be somewhat inaccurate as well.
The federal efforts continue to be suggestions, rather than required “shelter in place” or other orders. Some agree that the federal government should not issue mandates, while others are frustrated that they have not. National leaders have begun getting the virus. Senator Rand Paul has been diagnosed and clearly exposed others while waiting on his test results. One of those senators, Mitt Romney, entered quarantine but subsequently received a negative test.
The daily briefings have contained a mixture of helpful and confusing information. Most notable recently are the apparent disagreements between President Trump and Dr. Fauci in which President Trump seems to suggest more hope for rapid relief from particular medications than Dr. Fauci seems to feel is appropriate. President Trump has also increasingly suggested he’d like to see the country open for business and in church for Easter while Dr. Fauci and others are saying this is approximately when the virus will peak.
Guidelines coming from the press conferences also don’t seem to always align with CDC recommendations. The most recent example is the suggestion from yesterday’s news conference that people who have left New York City recently should self-quarantine for fourteen days. As far as I have been able to determine, the CDC website doesn’t seem to have any similar suggestion other than for people who have displayed symptoms.
So, it is confusing. Some of the confusion can be understood as this is a somewhat unprecedented situation and the information is changing rapidly. Some of the differences are emerging from different points of emphasis by those who think the danger to the economy, even to the level of a depression, is a greater or equal danger than the potential rate of death. Others feel that the best way to preserve the economy long-term is a near lock-down for a short period of time.
Also on the national level, congress has passed several economic relief measures. The most recent (early this morning) includes relief of about $2,000,000,000,000. It includes support for small and large businesses and $1,200 for each adult making up to $75,000 per year based on your most recent tax filing. Treasury Secretary Mnuchin has stated we’ll get checks in two weeks, while others say it will be closer to or in the month of May.
Closer to home, the Tennessee Department of Health is reporting that our state has 667 cases as of 3:00 p.m. yesterday. Numbers are updated at 3:00 p.m. each day. In Knox County, our health department has begun updating out numbers more often than the state. The Smoky Mountains National Park was closed yesterday due to crowding on popular trails. Governor Lee announced that schools will remain closed until at least April 24.
Health Department Press Conference, 12:30 a.m., 3/25/2020
The latest from the Knox County Health Department is that we have 20 cases, with 11 of those being between the ages of 18 and 49. According to Charity Menefee, Director, Communicable and Environmental Disease and Emergency Preparedness with the Knox County Health Department, in the 12:30 press conference today, six have recovered and four are hospitalized. She said the Health Department is conducting in-depth interviews with each diagnosed patient and then following up with their close contacts to give them guidance.
They continue to ask that people stay at home unless they are a part of an essential business or service. Noting that the majority are in the middle age range, she said it is too early to see if social distancing is working in this group. She said she feels we are “very early on the curve,” and we can’t predict when the number of cases will begin reducing.
She said the closure of businesses is formed using a national list of recommendations for situations such as this. She said these plans are already in place for situations like this. A question regarding UT offering to open dorms as hospital rooms, she said many conversations are underway and would not comment further. She reiterated that getting take-out food is safe as far we know and that we should simply wash our hands.
Asked about non-compliant businesses, she said reports are largely coming in through 311. She said they reach out as they get reports but she could not say how many such reports have been received. Drive-through testing sites are continuing to be considered, and they feel they may be getting closer to having equipment and other supplies to do that. She said it is exciting to see community groups, such as UT, beginning to offer help.