“Raft” Has Its World Premier at Broadway Academy of Performing Arts 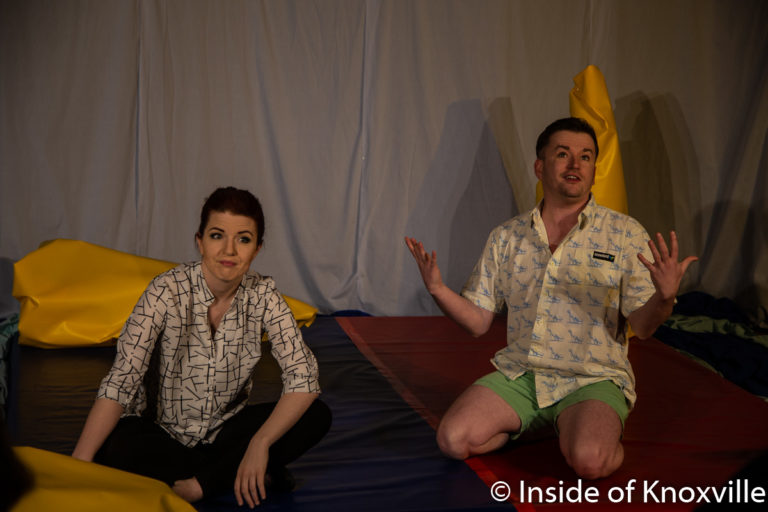 A new play, “Raft,” written by UTK alums Carolyn Thomas and Harrison Young, is having its full-stage debut at the Broadway Academy of Performing Arts. Directed by Ashley Freitag and presented by the Tennessee Stage Company as a part of their New Play Festival 2020, the comedy features only two characters, Morgan (H. Caitlin Corbitt) and “Hedgehog” (Nathan McGhee). The two are adrift in the Pacific Ocean aboard an inflatable castle that was swept to sea during a party when a storm suddenly hit the coast.

The writers first collaborated during their time in college at UTK on Thomas’s directorial debut, “Broken Bride.” Thomas currently lives in Arizona where she is Vice President of the AriZoni Theatre Awards of Excellence Board in Phoenix and a theatre journalist for PHX Stages. She also has a novel scheduled for upcoming release. Young is the Knoxville Ambassador for the Dramatists Guild of America and is involved in playwright mentoring through his Next Rung Productions.

In an interesting twist, the writers chose to make the roles non-gender specific. Dramatic readings have included two males, two females, and mixed-gender couples. While some sexual tension is acknowledged between the characters, the way the roles were written keeps the focus where it was intended: on friendship, its depths, limitations, and secrets.

As the hours pass, the friends engage in well-written, often sarcastic and witty banter designed to distract themselves from the possibility they will not be rescued. As time elapses, the existential threat can’t be ignored, and their conversation becomes, at times, more serious. Secrets emerge, and while the two would contend they had always been honest with each other, they reach a new level of openness with each other as they begin to realize their lives may be coming to an end.

Often very funny, the comedy runs as a thread throughout the production even to the end, at which time the characters become increasingly serious. The pacing is well done, with humor arriving just when it’s needed, but with each character allowed to plumb new depths as the story unfolds. Both Corbitt and McGhee deliver excellently timed lines, which is critical in a two-person play with little to distract the audience outside their lines.

There are two more opportunities to support this production. Final performances will be this Friday and Saturday (8:00 p.m. each night) and Sunday’s matinee (2:00 p.m.) at the Broadway Academy of Performing Arts at 706 North Broadway. It’s a good chance to support community theatre, a force that is growing rapidly in Knoxville. You can learn more about this play and the remaining portion of the New Play Festival, which runs through March 22 by visiting the Tennessee Stage Company website.