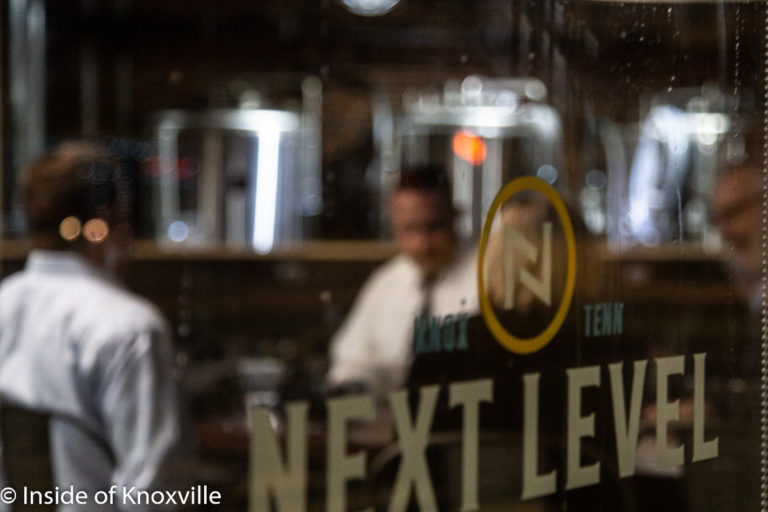 Next Level Brewing Company held a soft opening this past weekend to large crowds and they officially opened for business last night. I visited early on a cold Tuesday night and found a beautiful space, highlighted by tables constructed by the owners and lighting designed and constructed by Derek White of Bird on the Wire Studios.

The owners of the new brewery had hoped to open in July, then September. As is so common with business construction, there were multiple delays. Finding subcontractors is hard at this moment in Knoxville. They had some setbacks with poorly completed work and had to redo some of the construction. Ricky Lavendure of Dirty Pants Plumbing got the super-hero award for getting them back on track in that department.

In addition to Lavendure, there were quite a few people they wanted to thank, including Larry Sullivan with Sullivan Sandblasting, Chip Matthews at KnoxKrete, and Austin Peters who did the electrical work. Ed Barger did the sign and Brett Honeycutt did the original design. Riot did their printing work. They are particularly appreciative of two friends, Phil Kees and Shane Fox, who worked tirelessly, for free. Tim Davis has been a social media super-fan.

With all of the construction woes behind them, the trio of majority owners, Andrew Armstrong, Rick Cox, and Nathaniel Sears, are ready to serve up good beer. You’ll find a good selection of stouts, IPAs, and sours, along with ciders and non-alcoholic beverages. They plan to brew craft sodas in the near future. Food trucks will be common at the brewery, and board games are available to keep the family entertained. I understand a number of families took advantage of those this past weekend.

The ninety-nine-person capacity tasting room is located at 700 North Broadway, across Broadway from the Region’s Bank branch at the corner of Central Avenue and Broadway. Parking is available behind the building and along Lamar Street. Closed on Mondays, they are open Tuesday through Thursday from 4:00 p.m. to 10:00 p.m., Friday from 2:00 p.m. to 11:00 p.m., Saturday from noon to 11:00 p.m., and Sunday from noon to 8:00 p.m.