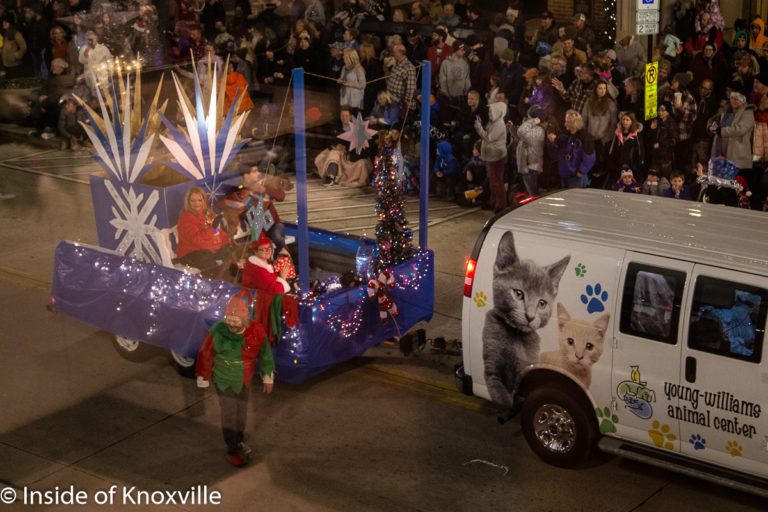 Due to the personal situation I’ve encountered in recent weeks, I haven’t written nearly as much about downtown Knoxville Christmas celebrations this year. Traditionally our family has enjoyed the Fantasy of Trees, the Lighting of the Christmas Tree, and much more. This year, we’ve missed all of that.

However, we were able to gather to watch the Christmas Parade, which was a real gift in the midst of everything else we had going on. I haven’t been able to share the photographs because of my brother’s death two days after the parade. The articles I covered last week seemed to be more pressing and, while there are a number of other topics I want to get to, I did want to include these photographs as a tip-of-the-hat to the season.

We were invited by friends to view the parade from their Gay Street home. I’d always resisted such accommodations before because I felt a need to be on the street, but it was the better idea this year. Urban Girl and Urban Boy had really enjoyed watching the Macy’s Thanksgiving Day Parade last year from inside a hotel room in New York City, so we knew they’d like it. For the adults in our group, given our other difficulties, it seemed like a quieter way to take in the sights.

Viewing the parade from inside a second-floor home gave me better sight lines for every part of the parade. It also offered shelter from the cold (though this year wasn’t very cold), snacks for the kids and adults, and a time to enjoy our friends and new acquaintances. The only downside was the glare from the windows through which I shot. I’ll try to do better on that part next time.

Since there are more photographs than I can put into one article, I’ll split them up. Unlike previous years, I’ll post them both today so I can move forward with other topics that have been delayed during my time off. Expect a second photographic installation mid-day. Enjoy.