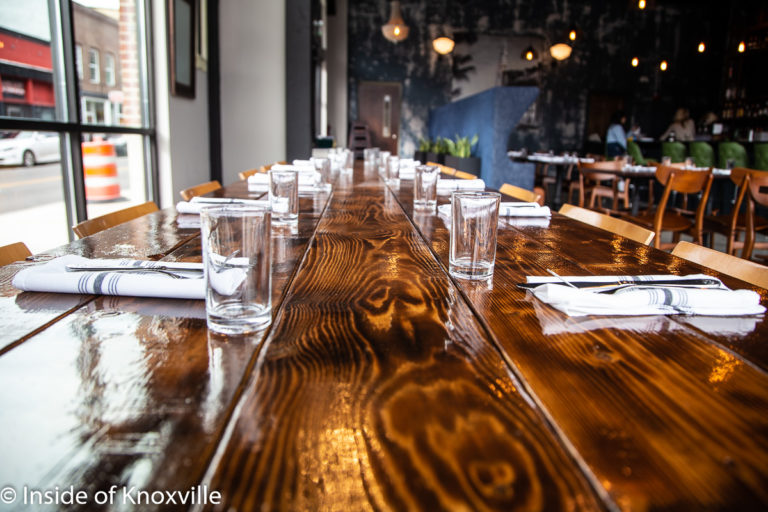 Downtown’s newest restaurant opens today in the Old City with a familiar face greeting new customers. I first introduced owner B.G. DeHart on this blog in 2013, with the opening of Stock and Barrel, for which he was partial owner. He’s since sold his interest in that restaurant and is back with his latest concept, Southern Grit.

B.G., originally from Morristown, attended the University of Tennessee where he received his degree in logistics and transportation. After working in the field for a year in Charleston, South Carolina, he realized that while he loved Charleston, he didn’t love the work. He moved to Nashville where he attained an MA in business. He’d always wanted to own a business and had some background in restaurants, so he joined with friends to open Stock and Barrel on Market Square.

He said what he loves about the restaurant business is that every day is different. He’s been working on the menu and developing recipes for the last year with chef Daniel Mendoza. They picked the location in the Crozier building at 126 South Central Street over a year ago. B.G. recognized that downtown development has spread much further from Market Square in the years since he helped open Stock and Barrel. He also loved the windows in the new location and decided it was the place he wanted to build his new business.

As with most business owners, he’d hoped to be open much earlier. Working through each phase with the architects, city permitting, and construction took longer than he’d hoped, but he’s been very pleased with the outcome at each step. Gregor Smee and Scott Busby provided the architectural drawings, and Reagan Construction handled the build-out.

While the concept evolved over the last year, it remained the same at heart: B.G. wanted to provide southern comfort food. For him that started with fried chicken and biscuits, and it never really wavered from that. He said he now understands why so many chefs are guarded about their recipes, saying small amounts of one spice or another completely changed the dishes. In the end, they kept what worked best, and he feels they have a strong menu to offer.

B.G. still considers Charleston his home away from home and travels there several times a year. He said it’s the perfect combination of beaches, interesting city, and great food. The influence of that food will be apparent on the menu at Southern Grit in dishes like shrimp and grits and crab cakes. He said he has tried to bring a little bit of Charleston to Knoxville. A full bar is available, including a range of wine and beer choices.

Dinner service will begin tonight as the restaurant eases into a full schedule. Initial hours will be 5:00 p.m. to 10:00 p.m. Reservations will not be taken initially. The restaurant will be closed on Thanksgiving and will open on Friday with dinner service. Lunch service will be added in the coming days with the restaurant open from 11:00 a.m. to 10:00 p.m. B.G. intends to add Saturday and Sunday brunch as the kitchen staff settles in with the initial menu.

In keeping with the theme of southern hospitality, B.G. wants the casual restaurant to feel as comfortable as home. The restaurant has seating for eighty, and patio seating will likely be added in the spring. You can follow the restaurant on Facebook, on their website, and on Instagram.