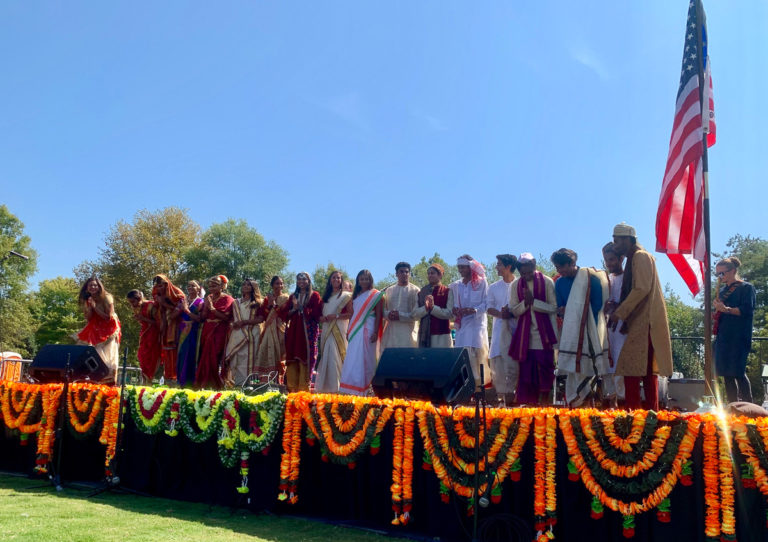 (Article and Photos by Caitlin McLawhorn)

When asked to cover the IndiaFest this year, I didn’t quite know what to expect. I was told there would be plenty of delicious food, so of course I couldn’t say no.

Formerly held at the Hindu Community Center in Lenoir City, IndiaFest relocated to the World’s Fair Park this year, providing an opportunity to showcase Indian culture in the heart of our beloved city. Hundreds of people lined up at the gates before the event officially started at 11am. I was told that 2,000 people had entered within that first hour, and this number quickly grew to 6,000 within the next. During a conversation I later had with event organizer Dimpal Patel, I learned that the expected attendance for the festival was around 10,000.

In review of the pictures I took of the crowd over the course of the day, it’s interesting to notice the subtle change in density of the crowd.

A first for the Hindu community in Knoxville, the event was designed to encourage inclusivity and celebrate diversity. Proceeds generated from the event will benefit the Hindu Community Center, a non-profit temple.

There seemed to be something for everyone. People of all ages turned out to celebrate Indian culture, and learn more about their neighbors within the community. The music started a little after noon, and I could barely stop dancing to the tunes long enough to snap some photos. A fashion show was held afterwards, representing the five major regions of India.

Fashion, an extremely integral part of Indian culture, was a prominent feature of this event. One of the bigger tents had been transformed into a boutique, with handmade jewelry and clothing. I had to turn on the blinders at this point, because I have a soft spot for the silky and shiny.

To calm down from the excitement over such beautiful clothing, I headed over to the yoga demonstrations, and learned a bit about  Pranyama; special breathing exercises usually utilized during meditation to calm the mind, body and spirit. Different yoga sessions were held throughout the day, some centered on alleviating lower back pain, others geared to helping relieve stress the body naturally accumulates throughout the day.

Probably my favorite part of IndiaFest 2019 was a live food demonstration that took place every 45 minutes, showcasing different authentic Indian cuisine styles. My favorite dish was the Dosa, a traditional Indian staple with lentils, chutney and a blend of vegetables. Fair warning—everything comes with a bit of spice. I wasn’t ready for the extra heat, and the two little girls selling lemonade from a stand in the tent next door laughed at me each time I came running to them because my mouth was on fire.

Everyone I’ve talked to about this always tells me the same thing, “Yep, that’s Indian food! It’s hot!” About 24 food tents of authentic Indian cuisine were a testament to that. Lilva Kachori, a round ball of pigeon peas and besan mixed with a bit of pepper and spices, was probably the least spicy thing there, and I ate a handful of these little balls. Seriously, I could not get enough.

The World’s Fair Park was an excellent platform to host this year’s festival. Parking was convenient, shade was readily available and the layout of the event itself was easy to navigate. I live in Lenoir City, and make the drive to work in the Old City every day. This new venue is more convenient to the Knoxville community, and already the prospect of IndiaFest 2020 has people excited.